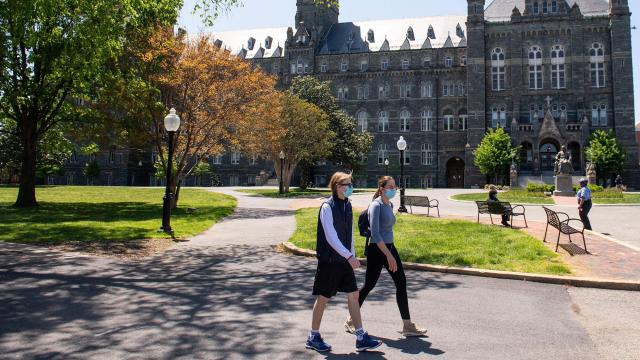 CNN — Lourdes Pelaez-Kingery was recovering from appendix surgery when she got the phone call that parents of college-age kids have come to dread in this time of coronavirus: Her daughter tearfully explained that she had moved out of her dorm at Texas A&M University-San Antonio days earlier after her suitemates threw a party and 14 unmasked friends showed up.

"She told me she had moved off-campus to family friends of ours and then begged me to let her come home," said Pelaez-Kingery, a health care worker who lives in League City, Texas. "Because of my job and her dad's — he's a critical care nurse — she knew there was no way she could come home if she was exposed to Covid-19 or tested positive."

Texas A&M's San Antonio campus has reported 51 cases among students and employees as of September 26. Pelaez-Kingery's daughter has tested negative for Covid-19 and moved to another dorm — a happy ending since Pelaez-Kingery had already prepaid for on-campus housing for the entire school year.

Scenarios like this are playing out for parents all over the country — even among those like Pelaez-Kingery who made sure to do "the Covid-19 safety talk" before their kids set foot on campus. The talk includes washing your hands, wearing a mask, social distancing and always having a go bag packed in case they are sent to quarantine.

The death last week of Chad Dorrill, a 19-year-old sophomore at Appalachian State University in North Carolina, drives home the risks college students face despite being young and healthy. Dorrill, who lived off campus and took classes online, passed away after complications from Covid-19, according to the university.

Unfortunately, college kids can't control their roommates, and others don't always listen to their parents. That may be why college campuses are currently considered one of the largest Covid-19 hotspots in the United States.

This is precisely why parents are worried and many are conveying their concerns more than ever with their kids, which is a far cry from pre-pandemic concerns over whether your child will get along with his or her roommate, said Mary Dell Harrington, coauthor of "Grown and Flown: How to Support Your Teen, Stay Close as a Family and Raise Independent Adults."

"We know that some college kids think, I'm too young to get this, or even if I do get it, I'll be immune, but this situation is hard on parents," Harrington said.

"No one knows who will have a few days of feeling ill and who will experience long-haul symptoms. Some kids are rolling the dice more than others, and parents are doing their best to monitor their kids long distance."

And, while some schools are doing a better job than others at testing and contact tracing, most universities have made the consequences of defying the rules quite clear — and this goes beyond parents driving to campus and making their kid clean out their dorm room before returning home to quarantine in his or her bedroom.

For Karl Maersch, a lawyer in Cleveland whose daughter is a freshman at Ohio State University in Columbus, the punishment the university metes out will have way more ramifications than any he could deliver. Ohio State reported 3,048 positive Covid-19 test results among students and employees as of October 3 and recently canceled the university's spring break in 2021 to try and prevent the spread of the virus.

"If our daughter defies the rules, she'll face the consequences her university has already outlined," he said. "We told our daughter that if she gets sent home, she's putting a cool time in her life at risk. We told her it's in her best interest to be vigilant and make sure she doesn't get exposed."

Beyond concerns about their kids' safety, parents are also worried about the financial consequences of bad behavior.

"College kids aren't going to get a slap on the wrist if they defy the rules," Harrington said. "They could risk suspension or expulsion, and parents could risk serious financial consequences. As we saw last spring when the pandemic began, there's no guarantee you will get your money back."

Some parents are hoping that being transparent about college costs, which average $41,426 at private institutions nationwide, will motivate their kids to stay away from potential superspreader gatherings on campus — or off.

"Many parents are coming right out and saying 'I'm not paying for you to go to college and be reckless and cause our family this expense,'" Harrington said.

Megan Lavery, a middle school teacher in Lake Forest, Illinois, made sure to sit down and discuss finances with her daughter before she left home for her first year at Purdue University in West Lafayette, Indiana. Purdue University reported 977 positive Covid-19 test results among students and employees as of Tuesday.

"We told her that if we're paying for room and board and full tuition out of state, we won't get our money back if she's sent home," Lavery said. "She knows that if school closes, we're not going to pay for her to learn online at Purdue, especially when we have an excellent community college in our town."

Those same sorts of frank discussions took place at Martha Leonard's La Habra, California, house this summer. Her son is studying remotely at Georgetown University. Her daughter is studying musical theater in person at Montclair State University in Montclair, New Jersey, which as of October 1 has 18 confirmed Covid-19 cases among students and employees since the start of the fall semester.

"Our daughter knows that we're doing everything we can to get her and her brother through college with as little debt as possible," Leonard said.

Leonard, who was recently diagnosed with Type 2 diabetes and her husband, who is disabled, know they've put their own health at risk sending her back to campus. But Leonard said her daughter knows what's at stake.

"She knows that if she breaks the rules it will very likely be the end of her education in that program," Leonard said.

"If, God forbid, she gets Covid-19 and it damages her lungs, her career will be over before she even had a chance to take her shot because singing and acting in eight shows a week, a la Nick Cordero's tragic story, just can't be done with bum lungs or a bad heart."

To help their kids navigate this difficult school year, many parents have made a choice to focus on sending positive rather than punitive messages in the hopes that their kids will make smart choices — even when they're tempted to go to a kegger or run around campus maskless.

Anne Sheradin of North Canton, Ohio, sends daily texts to her daughter, a junior at Ohio Wesleyan University, in Delaware, Ohio, which reported 26 total infected students in isolation on and off campus as of October 1.

"We text about her workload and she sometimes FaceTimes me on the way to class," Sheradin said. "She's the type of daughter who likes sharing that she tried a new creamer in her coffee."

"But the way we say goodbye has definitely changed. Instead of 'Goodbye, love you,' it's now 'Mask up.'"

Correction: An earlier version of this story incorrectly stated Lourdes Pelaez-Kingery's place of residence and Katie Maersch's first name in a photo caption.