Some Risk Frostbite for Love of a Parade 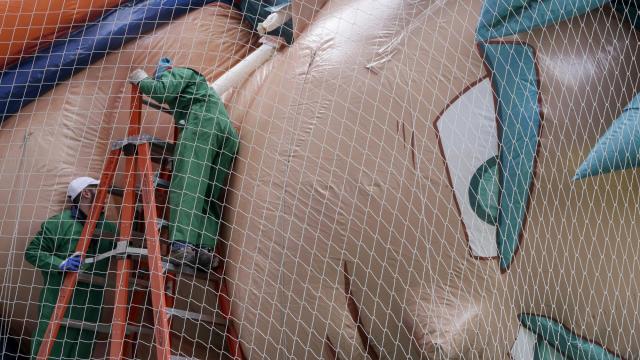 NEW YORK — Under metallic foil blankets, tucked in sleeping bags on the sidewalk or holding quilts over their shoulders and wearing earmuffs over their ears, thousands braved temperatures in the 20s to watch the Macy’s Thanksgiving Day Parade.

The National Weather Service on Thursday reported the morning’s lowest temperature at Central Park was 19 degrees, tying it for the second-coldest Thanksgiving Day in New York City’s history, and the coldest since 1901. (Temperatures dipped to 15 degrees in 1871.)

Nonetheless, at 72nd Street just before the parade’s 9 a.m. start, a family of turkeys stood on the route braving the cold. “We are icons!” said Jack Brandfield, 20, who along with his father, sister and a friend, was dressed in a full-body turkey suit, complete with yellow feet. “You can find us on Twitter.”

The group had shivered in that same spot since 4 a.m. Layers were key, Brandfield said. “A T-shirt, a henley, a flannel, a jacket,” said his friend, Jack Hillner, 20. “And a turkey suit!”

The parade began with a performance by the Ohio State University marching band, which moved along the route with almost military precision — except for one woman who had stopped playing her French horn because her fingers were too cold. She puffed on her hands until they came back to life.

Thor, a palomino police horse standing on Central Park West, seemed to handle it better; all of the police department’s horses wore special jackets emblazoned with “NYPD” on their rumps. “He’s warm,” the policewoman riding him said as she passed by. Was she? “Eh!” The officer said with a shrug, and trotted away on her horse.

Winds of 15 to 20 mph were expected during the parade, with gusts up to 30 mph. At points, floating balloon creatures, like the Grinch, teetered sideways in the breeze, which induced screams from the crowd. But handlers tugged him and others back into place.

If the winds had hit 23 mph or the gusts reached 34 mph, police could have grounded the balloons to avoid repeats of past mishaps and accidents that caused serious injuries. But the parade went on uninterrupted, although it appeared the balloons were not flying as high as usual. (Organizers often fly the balloons lower if they think conditions may become dangerous.)

At drugstores near the parade route, which runs from the Upper West Side to Herald Square, entire displays of handwarmers had sold out before the parade even began. Claire Churchwell, 27, stood in the aisle of a Duane Read on Columbus Avenue holding her sneakers in her hand and inspecting her feet for frostbite. Finding none, she put on three newly purchased socks on each foot and headed back into the cold.

In a spangly blue dress trimmed with fur, a snowflake in her hair, Jenna Kinder, 15, who had flown from Kentucky to perform with the Spirit of America dancers, had planned ahead. “I’m not cold,” she said. Her secret? “Handwarmers — everywhere.”

Some spectators came from even farther afield. “On Monday I was in Cancun!” said Yesenia Romo, 30, a doctor visiting from Aguascalientes, Mexico, a city whose name translates to “hot waters.” Thursday, she said, was the first time in her life she could not feel her toes. “Now I feel like my mind’s freezed.”

For the nine extended members of the Diaz family, the cold was too much. They lasted 32 minutes into the parade, before heading home. (To be fair, they had staked out their seats on icy metal bleachers since 7 a.m.) “It’s the tingling in the feet,” said Louis Diaz, 59, a superintendent. “We are going to go home and watch it on TV.”