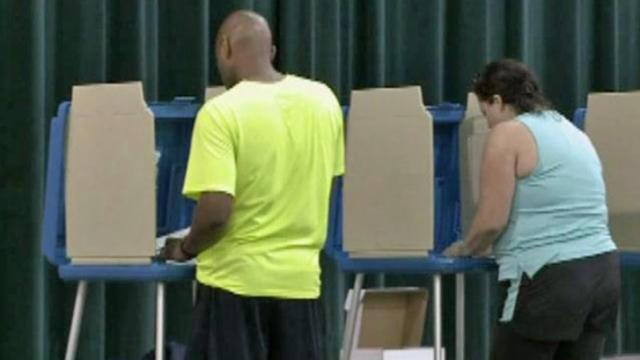 Raleigh, N.C. — When a group of voting rights advocates notified the state Department of Health and Human Services recently that North Carolina may not be living up to federal requirements that social services agencies help their clients register to vote, a spokeswoman indicated the department was surprised.

"This administration has always supported increasing voter registration and will fully review any alleged variance along with our processes to determine if the Department needs to revise its procedures," Alexandra Lefebvre, a DHHS press assistant, emailed Friday in response to both verbal and emailed requests for comment. "Given the gravity of this issue, we wish these activist organizations had approached the Department sooner when they first had concerns about the registration process."

That profession of surprise is a much different response than WRAL News received from the North Carolina State Board of Elections on Friday, where officials indicated that they were not only aware of the problem but said they had been prodding DHHS for years to address the issue.

In response to a public records request by WRAL News, the State Board of Elections provided more than 60 emails and calendar entries dating to 2012 indicating there have been meetings and emails exchanged between DHHS' Division of Social Services and elections officials that focused on the problem.

One of those emails includes a request for help from DHHS to the State Board of Elections in responding to a records request by Demos, one of the voting rights advocacy groups that put North Carolina on notice Friday that the state may be out of compliance with the 1990s-era National Voter Registration Act.

Stuart Naifeh, counsel for Demos, said that, even if the state department wasn't already monitoring itself for compliance with the NVRA, his group's public records request should have put officials in North Carolina on notice that advocacy groups were looking at the issue.

DHHS' response, he said, "only makes sense if they had their heads in the sand."

Naifeh quickly pointed out that he did not have any records that showed whether DHHS officials knew or did not know about the issue. Asked about the possibility that the department was truly surprised, he said, "To me, it's a problem they weren't monitoring themselves for compliance with federal law."

WRAL News asked Lefebvre and DHHS Communications Director Kendra Gerlach to clarify the Friday statement. After 8 p.m. Monday, Gerlach responded that NC FAST makes links to voter registration available from its home screen. NC FAST is an online portal designed to let benefit applicants apply for a number of services at once.

The bulk of public assistance benefits, such as food stamps and unemployment claims, is processed by state and local agencies. Federal law requires state agencies give anyone applying for those services a chance to register to vote or change their voting address. The idea behind the law is that the citizens who might need government services are some of the most likely to be on the move and overlook the paperwork needed to maintain their voting rights.

In the DHHS' statement from Friday, Lefebvre and Gerlach pointed out that county-run social services offices act as the on-the-ground interface with most social services clients.

On Monday, Gerlach emphasized DHHS was still trying to understand why the numbers dipped so precipitously. Asked if the DHHS intentionally let voter registrations slide either to focus on a backlog of claims or on orders from the McCrory administration, she said, "Absolutely not."

Whether or not the dip was intentional, records obtained from the State Board of Elections show it was a topic of conversation between the two agencies.

An email dated Nov. 24, 2014, shows that Belivia Spaulding, customer services manager for the Division of Social Services, was working to help the state elections board make contact with local DSS directors.

Emails provided by the State Board of Elections also show that Spaulding, Social Services Director Wayne Black and Tracy Hicks, a DHHS business analyst, met via conference call regarding NVRA on Sept. 18, 2014, with Veronica Degraffenreid, the state board's point person for NVRA compliance. That meeting followed up on a Degraffenreid email from earlier that month, which clearly outlined the obligations of social services agencies and asked for clarification about how a new computer system would aid in following through on those requirements.

Emails show county elections directors and social services administrators were concerned that NC FAST wouldn't properly handle the state's obligations with regard to federal voting rights law. These concerns appear to reach back to the end of Democratic Gov. Bev Perdue's administration in 2012 and continue into 2013 and 2014, after Republican Gov. Pat McCrory took office.

While NC FAST was supposed to be able to handle the process, the State Board of Elections developed its own portal for NVRA agencies to use, apparently in response to concerns that NC FAST did not fully comport with federal law.

"This system does not change an agency's responsibility of offering voter registration to services applicants with any new application, renewal, recertification or change of address," Degraffenreid wrote to DSS directors in January 2013. "The online system is just an alternative, albeit cost effective, way of fulfilling your NVRA responsibilities."