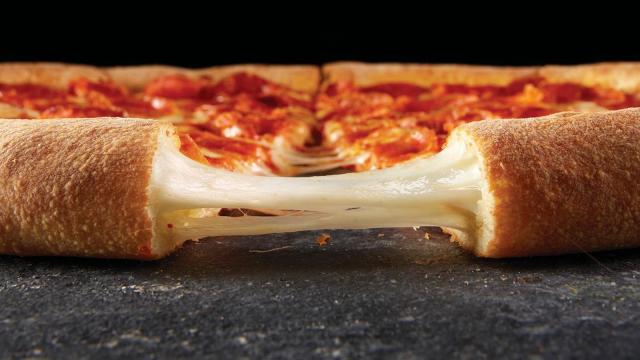 CNN — Papa John's is putting stuffed crust pizza on its menu next week, the latest salvo in the pandemic-era pizza wars.

Pizza's popularity has reached new heights in 2020, as people are working from home during the day and eating out less in the evening because of the pandemic. That's prompted rival pizza chains to get creative with their menus as they compete for customers.

Companies like Papa John's, Domino's and Pizza Hut have launched hiring sprees and marketing blitzes this year. Bakery-cafe chain Panera Bread even threw its hat into the ring in October.

Pizza Hut was the first major pizza chain to add cheese-stuffed crust to its menu back in 1995, setting sales records that year, according to the company.

Stuffed crust continues to be a fan favorite, according to Papa John's director of culinary innovation Tom Smith.

"We're always inspired by our fans," Smith said in a statement. "Stuffed crust lovers are passionate pizza fans, and it is something our fans continue to ask for."

Papa John's third-quarter sales were up 17% in October compared with the previous year, and its stock is up about 38% since January. The company has fought hard to rebound from the scandals involving its founder and former chairman John Schnatter, who resigned as chairman in 2018 after Forbes reported he'd used a racial slur during a company conference call.