Pandemic leads to dismissal of charges in 'Silent Sam' toppling 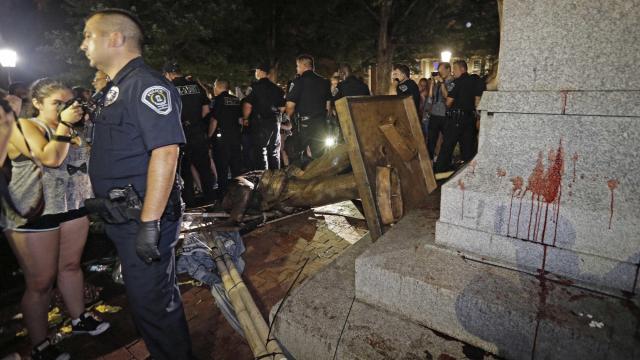 Hillsborough, N.C. — Charges were dropped Wednesday against two men convicted of bringing down a Confederate monument on the University of North Carolina at Chapel Hill campus in 2018.

Shawn Birchfield-Finn and Raul Jimenez were found guilty in Orange County District Court in April 2019 of injury to real property, injury to personal property, disorderly conduct and riot in connection with the August 2018 protest in which the "Silent Sam" statue was pulled from its pedestal. They were sentenced to 24 hours in jail, a $500 fine and 18 months on probation.

Both men appealed the convictions to Superior Court, where they sought a jury trial, but District Attorney Jim Woodall said it didn't make sense to use court time on the case when more serious trials are backlogged because of the coronavirus pandemic.

"What we've tried to do is prioritize cases," Woodall said, noting that about 1,500 nonviolent misdemeanor cases have been dismissed in recent months. "[These] are very low-level crimes compared to the murders, rapes and robberies that we try in Superior Court."

Jury trials were suspended for much of 2020 across North Carolina because of coronavirus concerns. Some counties resumed holding them only last fall after developing elaborate plans to keep adequate distance between jurors, witnesses, lawyers and court personnel in courtrooms. Woodall said jury trials likely won't resume in Orange County until this spring.

"With the slowdown in court, we were simply never going to be able to get to those cases to dispose of them," he said. "We had to make the tough decision to dismiss some cases."

Other defendants charged in the protest were acquitted, or the charges were previously dropped against them.

“The district attorney did the right thing dismissing these cases and prioritizing serious crimes," defense attorney Scott Holmes said. "The Confederate monuments celebrated the traitorous defense of racial human enslavement, and the people who removed them did us all a great service."

Silent Sam has remained in limbo since it was toppled. The pedestal was towed off in early 2019, and university administrators have said they're determined to keep the monument from returning to campus.

The UNC Board of Governors reached a deal in late 2019 to give the statue to the state chapter of the Sons of Confederate Veterans, along with money to build a facility where it could be housed. But the controversial deal was later thrown out in court.