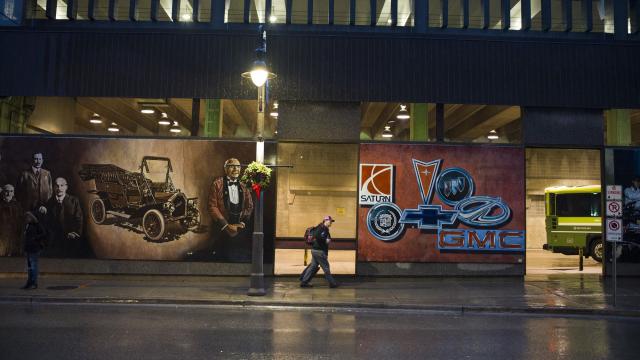 OSHAWA, Ontario — General Motors has been making cars in Oshawa, Ontario, for more than a century in factories that once employed upward of 40,000 people, so the company’s announcement Monday that it would stop production brought recriminations from across the Canadian political spectrum.

But for Eva McKeen, an inspector in the paint shop that looms over the north end of the vast manufacturing complex, the pain and the sense of betrayal went far beyond political and economic arguments.

“Just as you’re getting older, to know that you don’t have a job, it’s really heart-wrenching,” she said.

McKeen was among the hundreds of workers who walked out of the plant in protest just before managers were about to announce its death sentence. Outside, they began waving red flags while blockading the complex’s truck entrances. The ponchos they wore, bearing the logo of their union, Unifor, offered scant protection against the sleet coming down.

“The last thing we want to do is walk off the line, we really don’t want to do that,” McKeen said. “We just want GM to work with us.”

GM’s Oshawa plant is a shadow of its past. The two remaining assembly lines now employ about 2,500 unionized workers and 300 salaried employees.

Nevertheless, the closing announcement sent shock waves not just through Oshawa but across Canada. Long the largest car producer in Canada, GM lost that title to Toyota last year and will likely end up in the fourth or fifth position after the Oshawa closing. The overwhelming majority of the cars made in Canada are sent to U.S. buyers.

The economic importance of the automotive industry to Canada meant that both the Ontario provincial and Canadian federal governments joined with Washington to bail out GM during its bankruptcy a decade ago. And preserving access to the U.S. auto market was one of Canada’s key objectives during the recent renegotiation of the North American Free Trade Agreement.

On Monday, GM workers packed into a local union hall to watch a news conference called by their union leaders, and their anger soon became apparent.

As Jerry Dias, the union’s national president, vowed he would hold the company to the current contract that does not allow it to reduce or shut down plants until 2020, the crowd frequently drowned him out with shouts of disapproval for GM.

“We’re sick and tired of General Motors shipping all of our jobs to Mexico,” Dias said. “We will do whatever it take to get them to reverse their decision.”

But several politicians Monday downplayed any idea that GM might have a change of heart about the closure.

Doug Ford, the premier of Ontario, said the president of GM had told him, “The ship has already left the dock.”

Outside the House of Commons in Ottawa, Navdeep Bains, the federal minister responsible for industry, said, “We’re willing to engage and work with them but they’ve been clear about their position.”

Prime Minister Justin Trudeau said he had expressed his “deep disappointment” about the closing to Mary T. Barra, GM’s chief executive. He added that the government is looking at measures to help jobless GM workers “get back on their feet.”

Greig Mordue, a professor at McMaster University in Hamilton, Ontario, and the former general manager of Toyota’s manufacturing operations in Canada, said that Oshawa’s location ultimately doomed the factory.

Most of Canada’s other assembly plants, including a GM factory that will remain open, are west or north of the country’s largest city, Toronto, along highways providing direct and easy links to Michigan and Ohio. Oshawa sits on the other side of Toronto, along an infamously congested corridor.

“This is like a 100-year-old grandma dying,” Mordue said. “It’s sad but it is not surprising.” It takes relatively little effort to find GM employees in Oshawa who are third- and sometimes even fourth-generation members of their family to work for the company.

Even with the closing, the company won’t completely disappear from the city. Its Canadian headquarters will remain on the edge of town, and it also has an engineering center in the city that researches alternative-fuel vehicles.

After the company’s troubles in 2008, much of its workforce was reduced through early retirements. But there are comparatively few older workers in the Oshawa plant today. Unifor estimates the average age of current workers is between 30 and 40 and that they have just 15 years of service, far too little for anything approaching a full pension.

Scott Aquanno, a political scientist at the University of Ontario Institute of Technology, who has studied previous GM layoffs, said the local economy’s diversity — many people commute to jobs in and around Toronto — will help buffer the effects of the layoffs. But he said those left jobless will find it difficult, if not impossible, to find work with similar pay and benefits.

Timothy Martin, the 33-year-old son of a 32-year veteran of GM, was hired full time only this year. Sitting in special coveralls with flaps to prevent its zippers from scratching the pickup trucks on which he installs air bags and wiring, Martin said he was confident he would find work in the construction trades, but added he was still worried for the city’s future in the wake of the closings.

“Oshawa has a dark underbelly,” he said. “I don’t want to see how dark it can get.”