Raleigh, N.C. — A series of tweets from the account of a political action committee connected to Republican House lawmakers lobbed gay slurs and obscenities Wednesday night at Democratic House lawmakers and a Senate Republican staffer. 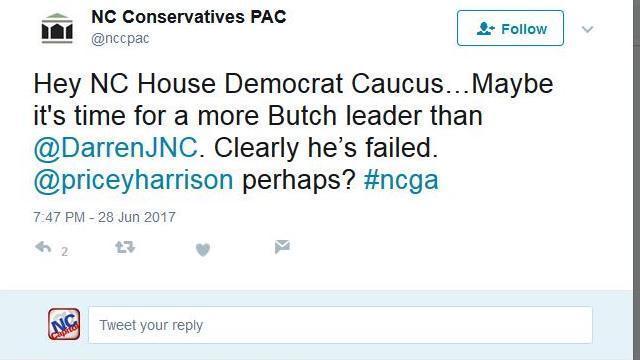 According to state campaign finance records, the North Carolina Conservative Political Action Committee originated in 2016. The group's webpage lists Rep. Chris Millis, R-Pender, as its spokesman for the 2016 elections. However, Millis said Wednesday night that he is no longer connected to the group and is not able to post to its Twitter account.

"I am not currently representing. Regardless, it is my understanding that the account has been hacked, as the rhetoric is no way reflective to past posts," Millis said in response to a question from WRAL News. "The proper authorities are attempting to shut down from what I am told. Let me know if you have any questions, but this is in no way linked to me." 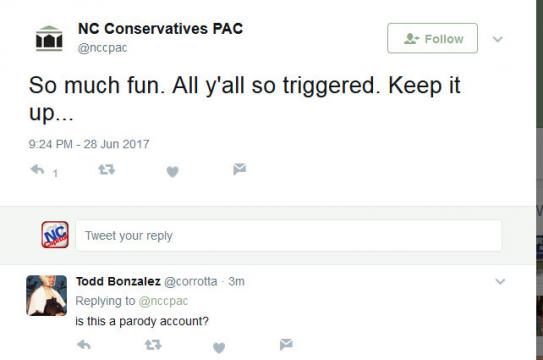 The group is registered to James Smith of Arden, who did not immediately respond to a call for comment.

NCCPAC was fined by the state elections board earlier in 2017 for failure to file its campaign finance reports for the second half of 2016 on time. It's still not clear to which campaigns the group donated.

LGBT advocacy group Equality North Carolina called on the group and its supporters to apologize.

UPDATE: In an unsigned statement issued on Twitter Thursday morning, the organization claimed the tweets were sent by a "former volunteer associate of our organization who had password access to our Twitter account." The accused former volunteer is not identified by name.

"The tweets, which have been deleted, in no way reflect the views of our organization or anyone associated with us and we sincerely apologize to everyone, especially Representative Jackson and Mr. Woodcox, for any offense those Tweets may have caused," the statement reads.

The statement also claims the group's website "was altered and then taken down without our knowledge," but offers no further details.

Our statement and apology regarding unauthorized Tweets pic.twitter.com/2mMuP4JE4O