Overwhelmed by Donations for Survivors of Fatal Bronx Fire 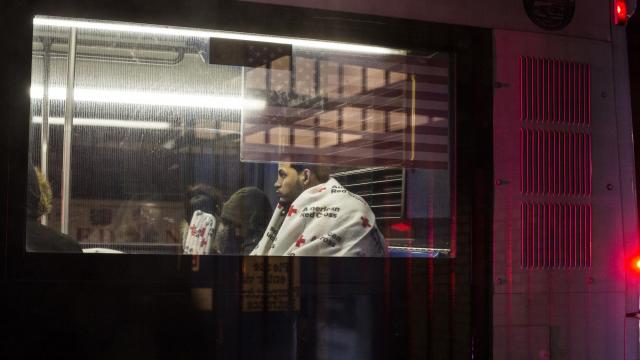 NEW YORK — Minutes before Sunday Mass at St. Martin of Tours Roman Catholic Church in the Bronx, as the music began, a man approached the Rev. Cosme Fernandes.

“Good morning, Father,” the man said. “I used to live in this neighborhood and I just drove in a truck full of clothes, but they told us they can’t take any more donations. What do I do?”

Fernandes had no answer for the man, who had brought the donations for the survivors of a fire that killed 12 people on Thursday. The fire, the deadliest in New York City in more than 25 years, destroyed an apartment building in the mostly immigrant neighborhood of Belmont, two blocks from the church.

A collection drive organized by the Police and Fire departments turned into a remarkable outpouring of support that was ended after just one day because of the overwhelming response. On Sunday, people were turned away.

“The way we’ve received support from the Bronx and beyond is a sign that the victims are not alone, that we are united,” Fernandes said during the homily at a Spanish Mass. Fernandes, 49, also reminded the congregation that Emmanuel Mensah, an Army National Guard soldier who died trying to get people out of the building, was once a parishioner.

“Many of you asked me how we should make sense of this tragedy,” he said. “Brothers, I don’t have all the answers. But we can live through this event by supporting each other.”

Next door, at a gym leased by the church to Public School 51, police officers and volunteers sorted through mounds of coats piled on plastic tables. Hundreds of trash bags stuffed with clothes obstructed the way. Toy trucks, diapers and canned goods were stacked high.

María Luisa Guzmán, a volunteer, said that by 2 p.m. Saturday the gym had overflowed with donations. Another collection site was opened at the nearby Our Lady of Mount Carmel Roman Catholic Church, and it also filled to capacity.

“People suffered in our community,” Guzmán, 54, said. “One day it may be us suffering like this, and I’m sure people will be there to help, too.”

“We just had to do something, especially this time during the Christmas season,” said Jean Reynolds, 68, a Eucharistic minister and longtime parishioner at St. Martin’s. “Even though it’s a tragedy, it can be considered a wake-up call to be there for our neighbors.”

Outside the gym, a police officer stood watch, holding a cardboard sign that read: “No more donations. Thanks.”

Detective Roberto Oviedo turned away dozens of people driving in with packed trunks.

“It’s great, the generosity from the city, but we’re overwhelmed here,” Oviedo said.

Amanda Finn, 33, of Stamford, Connecticut, walked away from the gym with bags of toiletries, gloves and jeans she and her mother, Barbara Finn, had just bought.

“That’s amazing that so many people came,” said Amanda Finn, a graduate student studying social work at Fordham University. She said they might try to drop the donations at a nearby shelter.

Jessica Cadiz, 43, drove from Rockland County after she saw the need for donations on Facebook. She, too, was turned away.

“I bought children’s clothes and did my New Year’s Eve cleanup for this,” Cadiz said.

Near the scorched building, many shops remained closed Sunday. Hundreds of candles lined the sidewalk, most blown out by the cold wind, but passers-by occasionally stopped to relight them.

In black marker on a white balloon, someone wrote: “RIP Maria B. Watch over our princess. We love you always.”

Walking past the balloon, Victoria Almonte, 35, told a friend about Maria Batiz, who died in the fire along with her 7-month-old granddaughter, Amora.

Almonte, who lives in a neighboring building, said she frequently saw Batiz “walk up and down the street with that very happy baby.”

“That same day of the fire, that morning, I saw her with the girl at the bodega here,” Almonte said in Spanish, standing next to a photo of Batiz and Amora.