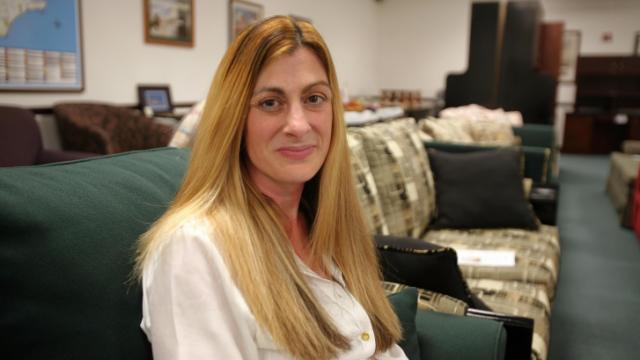 Keiffer wasn't always so knowledgeable about printing. It's a skill she learned in prison through North Carolina's Correction Enterprises – a program that allows inmates to learn job skills and produce goods, such as furniture, fire pits, eyeglasses, rain barrels, license plates, Braille transcription and more, in 32 plants across the state. Nearly 350 staff members train about 2,500 inmates to keep the plants running.

"Before I came here, I didn't have any print experience," Keiffer said. "To be able to learn that and have that skill, it not only changed my life in prison, but it changed my life going forward."

Correction Enterprises recently held its first overstock sale to clear out some of the items inmates made during training and products returned because of scratches, dents or other issues. The six-day sale raised $9,757 on the sale of 71 items.

The sale was open by invitation-only to state agencies and employees. By law, the program is not allowed to sell inmate-made items to the general public.

Director Karen Brown showed WRAL News around a conference room where the overstock items were displayed. Larger items, such as couches, chairs and desks took up most of the space, but smaller goods, such as purses, glasses and framed photos, were also exhibited.

"That right there changed somebody's life," Brown said, pointing to a piece of inmate-crafted furniture. "Because he saw for the first time in his life – I have a skill that I can use when I get out and do something with my life."

Click on the icons to learn more about Correction Enterprises' 32 plants across North Carolina.

Correction Enterprises employs mostly male inmates because they make up the largest percentage of the prison population – about 35,000 men versus about 2,700 women, according to North Carolina Department of Public Safety statistics. Female inmates work in two of the 32 plants and are responsible for three different jobs – making license plates, framing and matting and quick copy, which is similar to a Kinkos, according to Brown.

North Carolina's license plates have been made by female inmates at the state Correctional Institution for Women since 2001, and it is the only license plate plant in the nation that uses female inmates. From 1927 to 2001, male inmates at Central Prison in Raleigh produced the plates, but the operation was moved to the women's prison due to space restrictions.

WRAL News visited the license plate plant in June and was able to see the inmates at work. A staff of about 50 women makes about 16,000 plates a day – more than 3 million per year – at the plant off Martin Luther King Jr. Boulevard, near downtown Raleigh. Each tag is touched at least 14 times by inmates before it is put on a vehicle.

"A large number of our inmates have never had a job, ever," said Tracey Lariviere, assistant plant manager. "These inmates really take a tremendous amount of pride in what they do and in the work that they turn out every day." 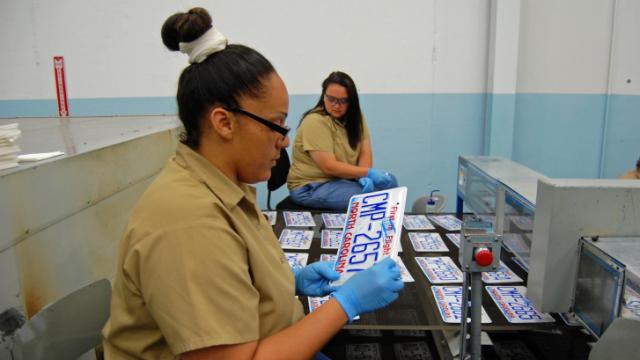 An inmate puts license plates in an embossing machine so they can be stamped with letters and numbers at the North Carolina Correctional Institute for Women in Raleigh. (Photo: Kelly Hinchcliffe/WRAL)

Inmates who work for Correction Enterprises can earn 16, 20 or 26 cents an hour, depending on their skill level and time spent working in a plant. They can also receive quality and production bonuses, but their pay cannot exceed $3 a day or $21 a week, per state law. They can use their earnings at prison canteens to buy snacks, shampoo, stamps and other treats.

Keiffer, who is a prisoner at the North Carolina Correctional Institution for Women, says she uses the money she makes to buy hygiene products and to make calls to her four daughters – ages 18, 14, 13 and 12. Prison phone calls cost $1.21 for 15 minutes, she said.

"I enjoy the fact that I have something to do with my day, that my day is not spent just doing whatever. I can use myself to benefit somebody else and be able to help out and feel part of a team and feel like I'm needed," she said.

"I'm interacting with customers all the time, so it teaches me how to give the best customer service that I can, and that's a skill that I need now and when I go home," she said. "I enjoy what I do. I enjoy coming to work. It's the best part of my week."

Keiffer was convicted of embezzlement in June 2010 and is scheduled to be released in October 2017. She says she hopes to be able to use her skills to create a new life for herself once she leaves prison.

'It's called the hidden workforce'

Potential success stories like Keiffer's are an inspiration, according to Brown, who says she often hears from former inmates who have transitioned into the working world.

"We hear all the time, 'Correction Enterprises changed my life,'" Brown said. "It's called the hidden workforce, because people don't know that inmates have got this training."

Inmates must go through apprenticeship programs before they can make products in the plants, "because we don't want them making mistakes while they're in production," Brown said. Men who work in the upholstery plant, for example, receive training through Catawba Community College. They undergo 480 hours of classroom training and then receive 6,000 hours of on-the-job training at the plant.

Correction Enterprises is a state-run program but is not supported with state funds. All of the items made by inmates are sold to state agencies, and most of the money earned is funneled back into the program. About $6.5 million is sent back to the state each year and used in the following areas:

"It's the same apprenticeship that any business anywhere in the United States would provide to their employees," Brown said. "The certificate that the inmate gets comes from the Department of Commerce. It doesn't say anything about them getting it in the Department of Correction. So, if they presented it to an employer, it would look like what they got from a furniture company."

Employers who hire former inmates are aware of their past though, Brown said. Businesses that agree to hire former inmates can receive a federal Work Opportunity Tax Credit of $2,400 and free bonding for one year. The Federal Bonding Program reimburses the employer at 100 percent for any loss if the former inmate steals money or property.

"We go to businesses all the time and industries that we train inmates in, and we tell them, 'We only want you to hire one ex-felon and give that ex-felon a chance,'" Brown said. "If we can convince them to hire one, they typically see (that) they want to work and they're motivated to work, and they have a good experience with it and then they'll hire more."

Keiffer says she hopes a company gives her the same chance once she is released. She is using her experience in prison to teach her daughters that you can change your life, despite what happened in the past.

"No matter where they are, even if they are what society sees as less than, it doesn't matter. You give your whole heart," Keiffer said. "I teach them how to take criticism and how to work with that and better themselves and take responsibility for what they do and own the mistakes that they did. Even though you made a mistake, you still have a chance to better your life."