Overlooked No More: Rose Zar, a Holocaust Survivor Who Hid in Plain Sight 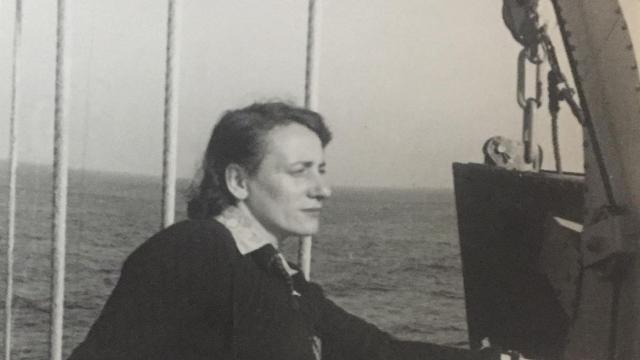 Unlike Anne Frank and thousands of other Jews who spent all or part of World War II sequestered in attics, caves or sewers, Rose Zar survived the Holocaust by hiding in the open.

In October 1942, when she was 20, her father feared the Nazis were closing in on the ghetto in Piotrkow, Poland, where they lived. Zar, who had been part of the Jewish resistance before the war broke out, was prepared. She grabbed her suitcase and forged passport and left her family behind.

For the next three years, she would move around Poland, disguising herself as a Roman Catholic named Wanda Gajda. She relied on a mix of courage, intelligence and moxie to get herself out of delicate encounters with suspicious Poles who she later said would “turn a Jew in for a liter of flour.”

Ruszka Guterman was born July 27, 1922, in Piotrkow. Her father, a leather craftsman who ran a shoe factory, told her that if she ever had to go into hiding, the best place would be the most obvious, where those pursuing her would never look.

“He said you have to hide in the mouth of the wolf, under the officials’ nose,” Zar told the USC Shoah Foundation in 1996, “and watch that they don’t devour you.”

Although she had earned a teaching certificate before leaving home, Zar was forced to find menial jobs like cleaning the stairs in a hospital or peeling potatoes in the kitchen of the local SS headquarters in Krakow. To keep out of trouble, Zar learned to laugh at the crude, often anti-Semitic jokes told by the Polish women she worked with.

“I figured it like this,” Zar said in the Shoah Foundation interview. “You are born in the wrong times in history. You are an actress. You have to play your role good, because you pay one price. It is your life.”

When an SS commander summoned her to his office for questioning, she felt certain it was the end. She answered his queries, telling about her experience as a nurse and how she had learned to speak German fluently. Several days later, she was introduced to the commander’s wife. The encounter that she had feared turned out to be a job interview. She spent the final years of the war as her father had advised, hiding in plain sight in the home of a Nazi commander as “Fräulein Wanda.”

Her position afforded her luxuries: silk stockings borrowed from the commander’s wife and front-row seats to theater performances of “Faust” and “Der Rosenkavalier” intended only for Germans. Yet every day, she concealed 50 Polish zlotys and her passport beneath her clothes in case she had to flee. She always had an escape route in mind.

“In many ways she was very fearless and very much ahead of her time,” said her son Howard Zar.

Decades later, she again drew on her father’s advice for the title of her memoir, “In the Mouth of the Wolf.” Written with Eric A. Kimmel and published in 1983, the book won the Association of Jewish Libraries’ Book Award and is taught in schools across the United States.

Howard Zar recalled receiving a letter from a student who had read his mother’s memoir in class and summed up her spirited determination in more modern terms, praising her “as ‘a “downright gangsta.'”

Once the Russians had chased the Nazis from Poland, Zar set up typing classes for young women in Krakow on the machine that she took with her from the commander’s home.

After the war, she was reunited with her brother, who had also hidden by concealing his Jewish identity, and her sweetheart from when she was a teenager, Mayer Zarnowiecki, a survivor of the Theresienstadt and Buchenwald concentration camps. They married in September 1945. (They later moved to the United States, where they shortened their last name to Zar.)

When violence broke out against Jewish refugees in the Polish city of Kielce, Zar and her husband decided it was time to leave. They helped smuggle 139 Jewish refugee children with them through Czechoslovakia and into southern Germany, where they helped set up a school run by the International Refugee Organization and the U.S. Army.

There, Zar taught orphans about their Jewish identity and helped them regain confidence. The International Refugee Organization praised Zar in a letter of recommendation for her “intensive devotion” to the children’s welfare “and much sacrifice of personal time to achieve the best results.” The children were later resettled in Israel, many aboard the Exodus, a refugee ship memorialized in book and film after the British turned it away from Palestine in 1947 with 4,500 Holocaust survivors and other refugees onboard.

She and her husband moved to South Bend, Indiana, where they had two sons and a daughter. There, she taught Hebrew and prepared Jewish children for their bar and bat mitzvahs. She later became the head of Jewish education for the Jewish Federation of South Bend.

Although neither she nor her husband came from particularly strict homes, they began keeping kosher and following the Sabbath. They also gave talks around the country about their stories of survival from the Holocaust.

Kimmel, the co-author of her memoir, remembered first talking to Zar about her life. He had been working on a Holocaust-themed novel for young readers and began asking Zar for details about her experiences. Once she began recounting her story, he realized it was better than anything he could invent. He offered to help her write it and she agreed, on condition the story remain hers and she vet every word.

“What makes the story unique is that it tells about a one-of-a-kind experience,” Kimmel said. “It doesn’t see the world in black and white. Treacherous Jews. Likable Germans. Heroic and despicable Poles. The human panorama is all too real. It holds up a mirror. What would we do? How would we choose?”

While in Poland during World War II, Zar was forced to remain silent about her identity. Later, she felt compelled to break that silence.

“'Of course we must talk; we must tell the stories. Otherwise, they will be forgotten and the enemies will have won,'” Kimmel recalled her saying. “'I must talk about it. It is my duty to talk about it. If I don’t tell my story, who will?'”