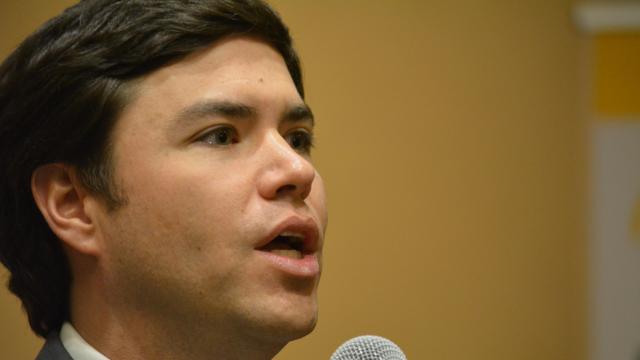 Raleigh, N.C. — Michelle Burton is a library media coordinator at an elementary school in Durham. On a normal day, she helps teachers and students with computers, manages the school library, and teaches students to use technology. One day last year, a box arrived unannounced. It was filled with bookmarks with State Superintendent Mark Johnson’s name prominently printed at the bottom.

"I purchase lots of bookmarks. I get free bookmarks from book companies," Burton said. "I don’t need any more bookmarks."

But that wasn’t the only thing the Department of Public Instruction sent. Since last year, there have been flyers with Johnson’s picture on them designed to go home with students, posters to go in hallways where he’s posing with two sheriffs, and emails – lots and lots of emails.

"We’re getting constant emails from him – email blasts from him," Burton said. "And we never received all that information from Dr. Atkinson before."

Johnson obtained the email addresses from schools and districts. But parents gave their emails to those groups not expecting they’d get emails from the state.

"(The flyers) just come across as campaign materials," said Suzanne Miller, who has a son in second grade in Wake County public schools. "They look much more like campaign material, the flyers, than anything that would be coming from the school system."

Miller says she’s concerned that the flyers aren’t a good use of state funds.

"Our schools are starved for money across the state and teachers are running out of paper and ink," she said. "And yet the school system is sending us double-sided, color copies."

A 'fine line' between sending vital information and campaigning

For his part, Johnson says the messages he’s sending are not campaign materials.

"I’m the state superintendent of public instruction. My job is to make sure that we address where we have challenges and we acknowledge those challenges and work to fix them," Johnson said. "But I also have to promote the good things going on."

DPI officials did not offer detailed information on how much this printed material has cost the department during Johnson's tenure.

Johnson says there’s a fine line to walk between doing his job as an elected official and campaigning as someone who could be running for office again. Internal lawyers at the Department of Public Instruction check the emails and other content to make sure none of it violates campaign law.

Johnson said he won’t use any of the emails he’s received from schools for his campaign. The emails he’s sent have sometimes been benign, celebrating the Fourth of July or other holidays. But others have weighed in on controversial topics, like teacher pay, and another had a link to a survey to see if parents agreed with him that students are tested too much.

More recent emails have included videos at the bottom, with a link to YouTube, which has Johnson elaborating on the content of the email.

The superintendent says the messages matter.

"These are very important efforts to make sure that we use every means possible to make sure we get more and more parents involved in the education of their children, whether it’s early childhood literacy all the way up to school safety efforts," Johnson said.

He said that having his name and face on the content is vital because there needs to be accountability in education. Johnson has not indicated whether he will be running for state superintendent or another elected office next year.