Outdoor heaters seem like a huge waste. Are they really? 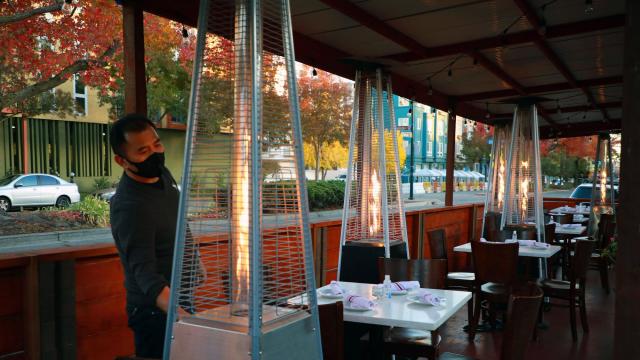 It’s getting chilly out there. And whether you’re hosting an alfresco Thanksgiving celebration or just trying not to freeze while working from home, you may be curious about the best way to heat yourself, but not the planet, this winter.

Let’s look at outdoor options first. Many people have purchased fire pits and patio heaters so they can gather with loved ones while sticking to COVID-19 safety guidelines.

Rob Bailis, a senior scientist at the U.S. branch of the Stockholm Environment Institute, a nonprofit research organization, has studied the effects of cooking and heating with wood and other fuels around the world. In addition to smoke’s detrimental effects on air quality and public health, he said fire pits can affect the climate in two main ways.

The first results from the production of firewood. Since trees absorb and store planet-warming carbon dioxide, cutting down forests faster than they can grow can contribute to climate change. And, when we burn those trees, that CO2 goes back into the atmosphere.

In the United States, however, Bailis said, this isn’t a huge concern. We’re generally gaining forest rather than losing it. He reduces his impact by using salvaged firewood, which you might be able to buy from landscaping or tree maintenance companies.

The second way fire pits can contribute to climate change is by generating aerosols and greenhouses gases like carbon dioxide, methane and black carbon as the wood burns.

Bailis said you can reduce these emissions by making sure the wood is seasoned, which means it’s had at least six months to dry after being cut, and by chopping the wood into smaller pieces, which helps it burn more efficiently. (These same tips apply to indoor fireplaces, for which Bailis also recommends adding an insert.)

If you don’t feel like channeling your inner Scout — or can’t or don’t want to have a fire because of air quality issues — you might be considering a patio heater instead.

If you get your electricity from renewable sources, an electric patio heater is probably your most environmentally friendly choice, said Christine Wiedinmyer, associate director for science at the Cooperative Institute for Research in Environmental Sciences at the University of Colorado Boulder. But if your electricity is generated by fossil fuels, a propane heater is likely a better solution.

According to the Environmental Protection Agency, one propane tank emits 0.024 metric tons of carbon dioxide. That’s equivalent to driving almost 60 miles or charging your smartphone 3,061 times. If you go through four tanks — which could get you up to 40 hours of warmth, depending on the heater — it would be like you drove 238 miles.

Though those emissions could be problematic if you had several patio heaters going all winter long, like in restaurants, Bailis said he wouldn’t worry much about them on an individual level.

“If you’re concerned about the climate, this isn’t the largest source of impact, even within your control,” he said. “The car you drive is going to make a bigger difference over the car’s lifetime than whether you burn wood or propane in the backyard for one or two nights a week for the winter.”

In fact, after doing some back-of-the-envelope calculations, Bailis estimated that if your wood consumption isn’t causing a net loss of trees, which is a safe bet in most of the United States, a fire pit would result in roughly the same amount of greenhouse gas emissions as a propane heater.

“From a warming perspective, it’s a wash,” he said. So, unless your energy comes from renewables, in which case an electric patio heater is best, you’ll have to base your decision on cost, local air quality and personal preference.

But what about when you head inside? Besides layering up and piling on the blankets, is it better to keep the thermostat low and cozy up to a space heater? Or, crank up the central heat?

That, again, depends on where you’re getting your energy, said Jin Wen, an energy efficiency expert and professor at Drexel University.

If you have electric baseboards, she said, it’s generally more efficient to lower the thermostat and use a space heater where you’re working. But if you have a high-efficiency heat pump, you should rely on that and skip the space heater entirely.

If you’ve got a gas furnace, it’s more of a crapshoot. You should consider your furnace’s efficiency (check its rating), your home’s size and your space heater’s electricity source.

Say you have an old and inefficient furnace, and electricity powered by wind and solar. In that case, a space heater might lead to fewer personal emissions — though, if your home is small, the difference probably wouldn’t be huge.

The type of space heater matters, too: Wen recommended those that radiate heat over those that force hot air through a fan. Since humans evolved alongside radiant heat sources (think: fire, sun), she said that’s how we prefer to receive warmth. So, using a radiant space heater might allow you to maintain a similar comfort level at a lower setting, thereby reducing your electricity usage.

According to Wen, space heaters might also have an unexpected psychological effect. Her research suggests that having “perceived control” over the temperature, through, say, a nearby space heater, can increase your “thermal acceptability,” or the range of temperatures in which you feel comfortable.

In other words, when used somewhere you don’t control the heat, like a shared office or an apartment building with a central thermostat, simply knowing you could turn on a space heater might make you more tolerant of cooler temperatures.

That said, be careful. Though safer than in decades prior, the Consumer Product Safety Commission reports space heaters are involved in approximately 1,700 fires and 80 deaths each year. To reduce these risks, the group suggests keeping space heaters 3 feet away from flammable items, plugging them directly into walls and turning them off before bed.

If you’re still not sure what to do, you shouldn’t lose too much sleep, said Jennifer Amann, buildings program director at the American Council for an Energy-Efficient Economy, a nonprofit research organization.

Similar to Bailis’ thoughts on the fire pit versus patio heater debate, Amann said other changes, such as purchasing LED bulbs, adding insulation and regularly changing your air filter could make a bigger difference over time than running or not running a space heater.

Wen, too, stressed the importance of implementing energy efficiency measures, no matter which heating method you choose. Since homes lose 25% to 30% of their heat through windows, she said it’s imperative to take steps like weatherstripping, plastic-wrapping and hanging shades or curtains.

“Otherwise,” she said, “you’re just efficiently generating heat that goes out the window.”