Out and About has ghostly experience at Asheville's Grove Park Inn

Asheville, N.C. — There is always a logical explanation for something happening -- except for when there isn't.

The WRAL Out and About Podcast crew (myself and Ashley Roddy) headed to the Omni Grove Park Inn on Tuesday to do an episode about the infamous Pink Lady ghost.

Here are the facts from Grove Park Inn Director of Public Relations and Community Outreach Tracey Johnston-Crum: In 1920, a young woman fell, jumped or was pushed to her death from the fifth floor onto the third floor Palm Court Atrium. She was rolled into a carpet and removed from the property.

There have been reports of people seeing pink mist. Other report TVs turning on and off and their faucets turning themselves on.

We had a slightly different experience at Grove Park that we can't explain. We set up our audio recorders to do an interview with Johnson-Crum. When we turned on the recorders, we got no audio levels.

We tried to record several tracks but heard nothing in our headphones. When we took the SD card out and put it into the computer to check for audio, we had a blank three second clip and a weird text clipping file titled "room 545-" created at 2:12 p.m. that day. That was the time we were trying to record. We did not have any other files open or any text selected or copied on our computer.

We never mentioned that room at all when talking and we certainly hadn't created a text clipping about it on the computer. When we opened the file it was blank, but when we selected the text, we saw that "room 545-" was typed in white in the file. We tried several times to recreate this but were unable to. Even when we did create a text clipping, all text inside of it was black. None of the text was ever white. 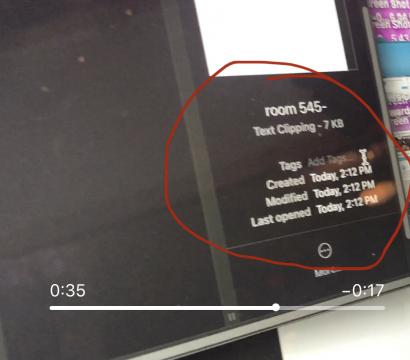 Our recorders were not in possession of anyone else and had been with us the entire time we were there.

We tried to record other audio and noticed that when we checked the card, one audio track (a blank one) was listed as being recorded at 2:29 p.m. and modified at 2:31 p.m. - the same time that one of our recorders began working again. To check our timing, we looked and all of our previous attempts at recording and the times were accurate. Our audio expert told us that it is possible that the timing was just off on the device. 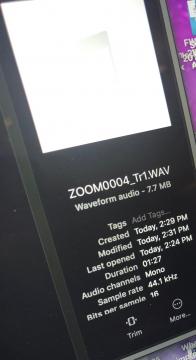 When we checked the audio on the podcast after it finally recorded one of our devices, we noticed the time was off as well saying we modified the file on April 13, 2009, at 11:11 p.m. It was created on Dec. 31, 1969 - a popular date for electronic devices to use by mistake.

None of it made any sense.

While the skeptic in us says that there had to be a weird moment where we highlighted text and somehow created a text file about room 545, but maybe we just didn't know it??

We can account for the times and dates being off but something about the text file still bothers us. Also, the audio recorder that didn't want to work for us suddenly began working again for our audio expert when we got back to the station.

You be the judge! Check out the Out and About podcast this week for our live recording at Grove Park Inn on the infamous third floor.

The Tar Heel Traveler also did a story on the infamous Pink Lady!