Ousted NC superintendent on 33-year-old successor: 'How do I help an infant in public education?' 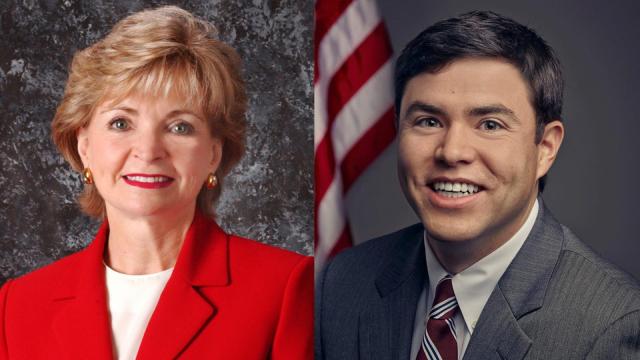 Raleigh, N.C. — June Atkinson walked around her office last week, marveling at the mementos she has collected during her years as North Carolina's state superintendent. Among them, flowers and notes from colleagues and a 100-pound statue of a young girl, a present from her husband to remind her that she works for the children.

In a few months, it will all be gone.

After 40 years at the North Carolina Department of Public Instruction – the past 11 as state superintendent – Atkinson will soon be out of a job.

"I was really very saddened and shocked that I lost the election," she said. "But life goes on, and as my minister said in church, hang in there and press on, and that’s my motto."

Atkinson is the longest-serving state superintendent in the nation and the first woman in North Carolina to hold the job. She lost to Republican Mark Johnson, the second-youngest statewide elected official in the country. Johnson is a lawyer and school board member in Winston-Salem/Forsyth County Schools. He received 50.6 percent of the vote in the Nov. 8 election.

During an interview at her office last week, Atkinson shifted between moments of sadness, sometimes crying as she spoke about leaving the job she loves, and moments of frustration as she recalled comments Johnson made during the election, some of which she thought were unfair.

"I have two pet peeves. One is it bothers me when people swim in the swamp of ignorance or swim in the swamp of dishonesty," Atkinson said. "It bothers me that my opponent would say disparaging things about people here in the department, that they are incompetent, that there are a bunch of bureaucrats here who don’t work well. I don’t take that personally because I know what it’s like to run for office. It’s the first time, however, I’ve run for office when I felt as if my opponent was dishonest in what he said."

The two have not spoken about the election outcome, Atkinson said, and she doesn't know what she'll say when the time comes. She promises a smooth transition when Johnson takes over in January, but it's clear the transition will be tough.

"It's really hard for me to figure out what I want to say to him, because I don’t know where to start. I mean, he has taught two years. He’s never run an organization that has almost 900 people. He has never traveled to the 100 counties. He doesn’t have a background," she said. "So, it’s like, how do I teach or how do I help a person who is an infant in public education to become an adult overnight to be able to help public education in this state?"

At 68, Atkinson is more than twice the age of her successor, who is 33.

"He has a law degree, so I’m assuming that he’s an intelligent young man and he will be able to figure it out at some point," she said.

In a phone interview with WRAL News last week, Johnson spoke about his excitement on election night, the chaotic days since and who he hopes to meet with before beginning his new job. He also responded to Atkinson's comments.

"We were always very civil and polite to one another," he said. "There are things that, yes, I was very critical of but no, not dishonest, not at all. I'm surprised to hear her saying these things."

Johnson said he plans to reach out to Atkinson in the coming weeks, as well as state school board members and other education leaders, to get advice and to talk about the future of education in North Carolina.

"I acknowledge that (Atkinson) has been at the Department of Public Instruction for 40 years, and she has a lot of institutional knowledge," he said. "I look forward to talking to her and hearing what she has to say about running the department and taking that into consideration as I go forward."

Still, he said, Atkinson should not discount his experience as a teacher, local school board member and lawyer.

Johnson taught at West Charlotte High School from 2006 to 2008 as part of Teach for America, a national corps of college graduates who commit to teach at a low-income school for two years. He remembers the school as "a very tough place to be a teacher and even tougher place to be a student" and says the experience helped shape his thoughts on education policy.

After teaching, he attended law school at the University of North Carolina at Chapel Hill. He currently works as corporate counsel at an international technology company based in Winston-Salem and serves on the local school board. He is in the process of resigning from both jobs so he can begin the transition to his new job.

Since his win, Johnson says he has been digging out from a lot of texts, emails and voicemails. When he's not fielding calls from the media and well-wishers, he has been busy planning the move to Raleigh with his wife and 3½-year-old daughter.

"Right now, it's been kind of organized chaos," he said. "If you say anything about me, please let people know that if they emailed me, I've gotten it. I'm going to get back to them at some point."

The chaos began on election night as Johnson sat at home with his family, monitoring the results online. He watched with excitement as he surpassed Atkinson in votes and maintained a lead. By midnight, he joined his supporters at an election party in Winston-Salem for Republican U.S. Sen. Richard Burr, who was also celebrating a victory that night.

"There were a lot of hugs," Johnson said.

Meanwhile, 100 miles away in Raleigh, Atkinson was having a much different night. She joined fellow Democrats and Council of State members at a hotel, where they planned to celebrate a night of victory.

"It started out very joyous and ended very sadly," she said.

The next night, she sent out a tweet, expressing her disappointment over the outcome and thanking her supporters.

Friends, I am saddened about not winning the superintendent's election, but I am so grateful for such wonderful supporters. Thanks to all.

Although the outcome was difficult for Atkinson, she says she had actually considered not seeking re-election this year. Ultimately, she made the "hard decision" to try again at the urging of her friends, including some Republican friends "who pushed the most."

"I’m grateful to them. And what I’ve tried to do as state superintendent is to be nonpartisan," she said. "I know I was elected as a Democrat, but I don’t think children need partisan politics. I believe we need to work together for the benefit of students."

The night of the election, Johnson couldn't sleep. Adrenaline kept his mind racing with all that was ahead. Not only did he need to move his family to a new city, he had to prepare for his new job overseeing a system with more than 1.5 million students and 180,000 full-time employees.

His mind has continued to race in the nights since.

"I've been sleeping more, but also now I kind of just pop up at 4:30 in the morning with ideas in my head that I just have to get out of bed and get on paper," he said.

Johnson isn't sharing what those ideas are just yet.

"Out of respect for the team (at the Department of Public Instruction), I would like to talk to them before presenting plans to the press," he said.

It's also unclear how he might handle some of the senior staff at the department. As superintendent, Johnson will have the power to dismiss or reassign dozens of people who are in exempt policymaking and exempt managerial positions. He said he hasn't given any thought to staffing yet.

(Learn more about the 31 exempt positions within the Department of Public Instruction that can be dismissed or reassigned.)

For now, Johnson says, he is trying to take things slowly and "be very deliberate and seek a lot of advice." He still has several personal issues to take care of before January, including putting his Winston-Salem house on the market and searching for a new home in Raleigh.

"If you have any leads on houses," he said, laughing. "We have to move to a brand new city where we don't know the city. We have to learn the neighborhoods. Where do we want to live? And how close can I actually get a house to DPI so that I don't spend too much time in the car so I can see my daughter at night?"

Johnson says he is still in awe of what happened on Election Day and what that means for his family.

"It's one day that determines the future of your personal life," he said. "It's an experience that is unlike any other that, really, I don't think anyone can know unless they run for office."

While he won't say what plans he has for his new job, he does know that he wants to make sure "every child has the opportunity to work hard and reach their American dream."

"Even though I'm only 33 years old, I know how much work we have to do in order to get there in my lifetime," he said. "And I am ready to devote my life to that."

Back in Raleigh, Atkinson will soon begin the process of packing up her office and leaving the place she has worked for 40 years.

"Regardless of the outcome, one thing I have are the memories of working really hard for each student in our state," she said, crying. "So, I find that very rewarding."

As for what's next, Atkinson says she already has something in mind.