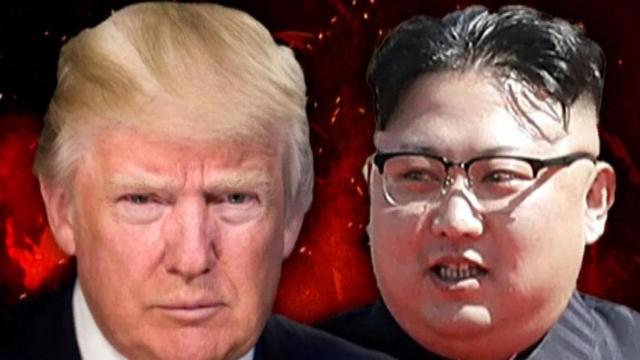 You can hear those heads exploding from here to Oslo.

Republican lawmakers are pushing Donald Trump, the most combative man in the universe, for a Nobel Peace Prize.

How unimaginable is this?

Just picture a wildly hirsute cartoon figure with a hair-trigger temper festooned with a medal of Alfred Nobel reading “Pro pace et fraternitate gentium” (“For the peace and brotherhood of men”).

“The guy who said he could be as presidential as any president except for Abraham Lincoln is instead about as presidential as Yosemite Sam,” says his biographer Tim O’Brien. “I really think of him as Yosemite Sam — just hopping around in anger, firing his gun wildly, sometimes at his own foot. He was so unhinged and ranting in that call to ‘Fox & Friends’ this week that even the hosts couldn’t wait to get him off the air.”

Yet Sen. Lindsey Graham, who once labeled Trump “a kook,” “crazy” and “unfit for office,” told Fox News on Friday: “Donald Trump convinced North Korea and China he was serious about bringing about change. We’re not there yet, but if this happens, President Trump deserves the Nobel Peace Prize.”

And here’s the part that would drive Trump haters into a frenzy: If he could pull off denuclearizing North Korea, he would deserve it more than Barack Obama did when he had that bouquet thrown at him seconds into his presidency.

And Trump certainly would deserve it more than Henry Kissinger, who won the prize in 1973 for his efforts to end the Vietnam War, after privately persuading Richard Nixon to keep it going for years and while secretly bombing Cambodia.

If he won, Trump would be within his rights when he claimed it as a personal victory since he decimated the State Department to the point that we wondered if interns in Foggy Bottom were crafting North Korea policy.

It would be a paradox: The man so many Americans loathe as a villain taming a charter member of the Axis of Evil.

Of course, any Strangelovian thing could happen when Little Rocket Man and the Dotard actually get together, given that both Dear Leaders live in bizarro fantasy worlds with fawning courtiers, where lying and cheating abounds. (So far, Kim Jong Un has Trump beat in the fawning enforcement department since he had his uncle killed for, among other reasons, clapping halfheartedly for him.)

And even as Trump helped end the Korean War — does that call for a special episode of “M*A*S*H”? — he was vowing that Iran “will pay a price like few countries have ever paid” if it ever threatens us in any way.

But for the moment, Trump’s peculiar form of diplomacy — a combination of belligerence, bluster, name-calling and ignorance of history — has somehow produced a possible breakthrough in North Korea that eluded his predecessors.

Heads are also exploding from Chappaqua to Hollywood as the unfathomable idea sinks in that, despite Trump’s lack of a moral or political core, despite the fact that he has tarnished the presidency with his nasty bullying, race-baiting, unmoored tweeting and authoritarian tendencies, he could get a second term.

Democrats are spun up all over the country, flocking to the polls in special elections with sky-high enthusiasm, buoyed by empowered women driven by disgust at the Groper in Chief who has so far escaped a reckoning.

They are sanguine that they can convert the Trump hatred into a big bad blue wave for the midterms and win back the House and maybe the Senate and get their revenge on the Orange Menace.

Strangely enough, though, a strong midterm for the Democrats could help Trump two years down the road if they take back the reins of Congress and go too far, as Democrats are wont to do.

Republicans paid a price in 1998 for pushing to impeach Bill Clinton, and Clinton regained popularity.

As far as the presidential race in 2020, the Democrats seem to be repeating the mistake that Hillary Clinton made: counting on the awfulness of Trump to do their work for them. (And the righteousness of Robert Mueller.)

They are not grooming a gleaming crop of presidential contenders or honing a seductive message that could win back the alienated voters who put Trump in just because he promised to shake things up.

Their leadership and top presidential prospects symbolize the past, not the future. They should be the éminences grises ushering in an exciting new generation, not the retreads and missed-their-moments dominating the field, as the entire party is leaping to the left — another complication in a national election where you have to appeal to a wide swath of voters.

The Democrats are counting on Trump to self-destruct. And certainly, he loves to light his own auto-da-fe and incriminate himself. But the Democrats’ delight in this distracts them from rising from the humiliating ashes of 2016 with some dynamic new ideas and messengers.

“We’re dealing with a person who’s psychologically and categorically different from any previous president,” says Trump biographer Michael D’Antonio. “He may be the most successful con man in history atop the most powerful nation in history. He has prevailed in a way no other spinner of tales has prevailed.

“He’s shaping the behavior of much of the world, getting inside people’s heads. He’s like Cambridge Analytica. He knows how to determine what people are interested in and like and dislike and respond to. Then he acts in a way that changes the course of things.

“And expecting him to be different or less crazy only makes us the crazy ones. His behavior gets more outrageous, out of control and florid as the pressure on him persists. And it’s only going to get worse.”