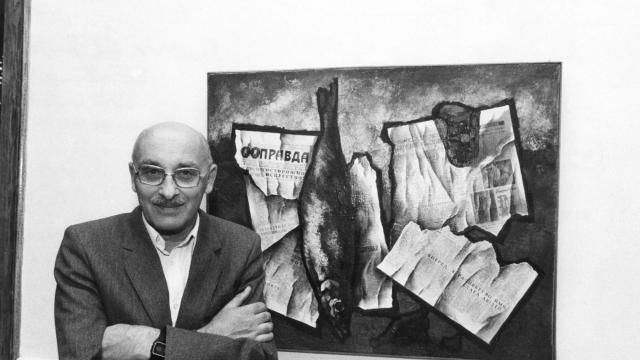 Oskar Rabin, a painter who was at the center of a group of dissident artists who defied Soviet authorities in the 1960s and ‘70s, died Wednesday in Florence, Italy. He was 90.

Alexander Smoljanski, a filmmaker who with Evgeny Tsymbal has just completed a documentary about Rabin, announced the death on Facebook.

Rabin had been in Florence for an exhibition of his work at the Florentine branch of the I. Repin St. Petersburg Art Academy. It opened the day after his death.

The Russian state news agency RIA Novosti said the cause was a heart attack. Smoljanski’s Facebook post said Rabin had been under treatment at a Florentine clinic for a hip injury.

Rabin painted still lifes and landscapes, often imbuing them with wry critiques of Soviet life, but his fame rested as much on his defiance as on his artistic ability.

In 1974 he was among the organizers of an outdoor exhibition in Moscow by nonconforming artists — those who were denied exhibitions in recognized galleries and museums because they refused to limit themselves to the officially sanctioned style of the day, Socialist realism, which emphasized heroic scenes and sculptures and left no room for impressionism or abstraction or unpleasant subjects. The artists met an unforgiving resistance.

“When they gathered in an open lot on September 15,” Hedrick Smith, who was then a reporter in Moscow for The New York Times, wrote in his 1976 book “The Russians,” “they were brutally dispersed by plainclothes police dressed as workers and operating bulldozers and dump trucks.”

By some accounts, police had to pluck Rabin from the upper reaches of a bulldozer he had clung to as it advanced on him. The aborted art show has ever since been known as the Bulldozer Exhibition.

The international reaction was so strong that a few months later the Soviets allowed another show by the nonconforming artists, but the tensions remained. Rabin continued to incur official wrath and endure the occasional arrest.

In 1978 officials encouraged him to make a trip to Paris; while he was there they stripped him of his citizenship. He lived in Paris the rest of his life, even though he became celebrated in Russia after the fall of the Soviet Union.

“The Russia-themed pictures that I sometimes paint even now are not nostalgic,” he wrote in “Three Lives,” a 1986 memoir. “These are pictures-cum-recollections — just a memory about the past. For no matter what sort of past it was, you cannot erase it from your heart.”

Oskar Yakovlevich Rabin (whose name is, variously, also given as “Oscar” and “Rabine”) was born on Jan. 2, 1928, in Moscow. His parents were both doctors, and both died of illnesses when he was a boy; an orphan, he spent the years of World War II living in children’s dorms.

In 1944 he was sent to live with an aunt in Riga, Latvia. He trained at an art academy there, then studied at, but was expelled from, the Surikov Art Institute in Moscow.

It was in the mid-1950s that he fell in with a group of artists and intellectuals who were creating artworks and writings that were outside the sanctioned parameters. By 1958 he and his wife, Valentina Kropivnitskaya, also an artist, were living in a camp barracks in the Lianozovo district near Moscow, their home a frequent gathering spot for the renegades, who became known as the Lianozovo Group.

“Its participants were united not by some common artistic ideology,” art collector Alexander Glezer wrote in 1995, “but rather by their uncompromising stand in the fight for freedom of expression and the right to display their works to their compatriots.”

Rabin’s paintings tended toward the expressionistic and were decidedly unheroic, putting him at odds with the official definition of art.

One work from 1968, “Still Life With Fish and Pravda,” featured a glass and a dead fish atop crumpled pages of Pravda, the official Communist Party newspaper, a provocatively ambiguous fragment of a headline showing.

In his book, he expressed mock indignation that such a painting was deemed not to fit the sanctioned realism of the time.

“I was reproached for my still lifes, for vodka bottles, and for a herring sitting on a newspaper,” he wrote. “But haven’t you ever drunk vodka with a herring? At all the feasts, including the official ones, one drinks vodka.”

Such cheeky works, and his outspokenness, made Rabin a prominent figure among the nonconforming artists.

“Middle-aged and essentially hairless, Rabin developed the incongruous status of a bald rock star,” John McPhee wrote in his book “The Ransom of Russian Art” (1994).

In 1990, President Mikhail Gorbachev restored Rabin’s citizenship. His works have since been exhibited many times in Russia, as well as in the West. His work is in numerous museums and has been sold at leading auction houses.

Kolodzei said that though Rabin’s paintings could be grim, many had a subtle ray of hope.

“Light, which plays an important spiritual role in much of Rabin’s work, can be seen as symbolizing the warmth of the cultural gatherings in the Rabins’ home,” she said.

“Artists like Oskar Rabin can be said to have contributed to the ideological erosion and ultimate failure of the Soviet system,” she said. “In a system where everything was defined as political, it was impossible to escape politics even in art; thus some nonconformist art movements became imbued with political meaning from their very inception no matter what the artist(s) may have intended.”

Smoljanski, who worked on his documentary for eight years, said Rabin led by example.

“He showed us all — without any pathos or heroics — how to stay free in a country not designed for freedom,” he said on Facebook. “He never compromised with his persecutors. Never betrayed his ideals.”