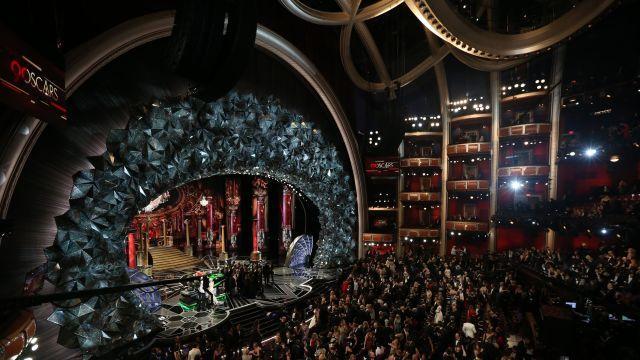 LOS ANGELES — Alarmed by plunging television ratings for the Academy Awards, the organization behind the Oscars said Wednesday that it would add a category for blockbuster films and shorten the telecast by giving out some statuettes during commercial breaks.

Yet adding a category for “outstanding achievement in popular film,” as John Bailey, the president of the Academy of Motion Picture Arts and Sciences, put it in a letter to members, could create new problems for the beleaguered organization.

What if a movie many see as a legitimate best picture contender — the worldwide smash “Black Panther,” for instance — receives a nomination for the populist Oscar but not for best overall picture? Does that mean “Black Panther” and films like it are second-class citizens?

The letter, co-signed by Dawn Hudson, the academy’s chief executive, did not say what would constitute a “popular” film or whether movies nominated in that category could also be nominated for best picture. (An academy spokeswoman later clarified that they could.) The category will make its debut at the next Oscars ceremony, which will be held on Feb. 24 and televised on ABC.

“Eligibility requirements and other key details will be forthcoming,” the letter said. The academy did not respond to a request to interview Hudson or Bailey, who was re-elected to a second one-year term as president at a board meeting Tuesday night.

The academy’s board also voted to keep the telecast to three hours, which it described as an effort to deliver “a more accessible Oscars for our viewers worldwide.” To trim the telecast — the last show, in March, stretched nearly four hours — the academy said it would present “select categories” during commercial breaks, with the winning moments edited and aired later during the broadcast.

It did not say which categories could be edged aside. The most likely are the three Oscars presented for short films. Producers hired to shape the annual telecast have long pressed the academy to reduce the number of awards presented on air. (There are now 25.) But academy traditionalists — some of whom have left the board in recent years — always pushed back.

A third change will not take effect until 2020, the academy said. The telecast will be held earlier in the year in an attempt to speed up Hollywood’s awards season, which in recent years has stretched to four solid months of ceremonies. By the time the Oscars roll around, there is little suspense about who will win what, and the honorees themselves have a catatonic look, having been trotted from one awards podium to the next.

The change in dates may force other telecasts, including the Grammy Awards, to recalibrate their own positions on the calendar.

The addition of a category for blockbusters was immediately assailed by some prominent film critics. Manohla Dargis of The New York Times called the changes “stupid, insulting and pathetically desperate” on Twitter.

While some responses were favorable, the academy also drew wide mockery, with the social media universe suggesting other categories that might draw more viewers, like hottest on-screen kiss or best stunts.

Whether its remedies are the correct ones or not, the academy had to take some kind of action: The Oscars are increasingly out of touch. A record low of 26.5 million people watched this year’s telecast, a nearly 20 percent drop from a year earlier. As recently as four years ago, the Academy Awards had an audience of 43.7 million viewers.

“We have heard from many of you about improvements needed to keep the Oscars and our academy relevant in a changing world,” Bailey wrote. “The Board of Governors took this charge seriously.”

The Oscar telecast is a big business, generating 83 percent of the academy’s $148 million in annual revenue. ABC controls broadcast rights for the show until 2028 at a cost of roughly $75 million a year. ABC was seeking as much as $2.8 million per 30-second commercial for the most recent telecast.

Nose-diving ratings threaten that income, not to mention eroding the position of the Oscars in comparison to the more freewheeling Golden Globe Awards. A few more years of declines and the Globes will be the higher-rated show. Reasons for the Oscars’ decline abound — the general fragmentation of the media landscape is one — but the central complaints have been about the telecast’s marathon length and increasing tendency to honor niche films that the majority of American moviegoers have not seen. Last year’s best picture winner, “The Shape of Water,” had sold about $60 million in tickets at the time after playing in theaters for 14 weeks.

In 2009, the academy tried to make room for more widely seen films by doubling the number of potential nominees for the best-picture award to 10 from five. That shift occurred after “The Dark Knight,” a critically acclaimed superhero film, was shut out of the best-picture category, despite receiving nominations in eight others and winning in two.

But allowing more best-picture nominations did little to solve the problem. For the most part, moviedom’s elite continued to bypass films with large audiences and simply put forward additional niche ones.

One rumpus after another has roiled the academy in recent years. After black actors and films that focused on black characters were overlooked for Oscar nominations in 2015 and 2016, the #OscarsSoWhite social media outcry was so fierce that the academy raced membership changes into effect. There has been progress, but it’s still mostly white and male.

The 2017 Oscars added the humiliation of naming the wrong movie, “La La Land,” as the best picture winner, before the error was corrected from the stage and “Moonlight” was given the trophy.

More recently, the academy has been struggling to contend with the #MeToo movement. The organization put behavioral guidelines in place for members — only to have Bailey become the policy’s first test. A woman accused him of inappropriate touching during a van ride on a movie set. The academy said in March that it had conducted an investigation and concluded that the claim had no merit.