Oscars So Awkward? Trying to Top the Globes Won’t Be Easy 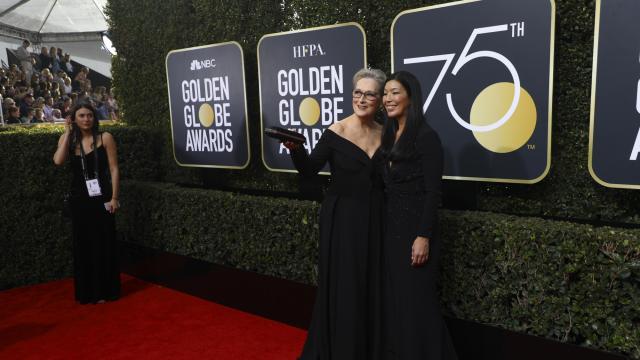 The women of Hollywood have every reason to view the Golden Globes as a smashing success. Their Time’s Up campaign to combat sexual harassment wholly defined and stole the show, eclipsing such trivial matters as who exactly won which award.

Instead, the big stories of the night were the women’s rousing speeches, snarky digs, activist arm candy and swishy all-black garb — which, not that it was supposed to matter, made for an especially glam red carpet.

Sure, the men kept largely mum about Time’s Up once they got onstage, despite professing solidarity on the red carpet and backstage, bedecked in Time’s Up lapel pins and black shirts. Several male winners said they felt they should just listen, though why they didn’t acknowledge as much from the stage remains an open question. Best-case scenario: They genuinely believed silence was golden. Worst: It didn’t cross their minds or they didn’t care. Likeliest (allowing benefit of the doubt): They were scared.

Moving forward, there are questions. How can women keep up the momentum, and will they? And, how can the Oscars possibly top this?

My guesses: The momentum will be hard to maintain, but not impossible. And the Oscars, which Jimmy Kimmel is set to host again, will probably fall short, now that the bar has been set high.

At Golden Globes after-parties, several women involved in Time’s Up said that while their activist work would carry on strong, they didn’t know (or perhaps weren’t willing to say) what may be in store for the Oscars. There is no doubt that the punch they packed at the Globes benefited from timing, and the elements of freshness and surprise.

The Globes are always giddier than the Oscars, not least because they take place early in the new year, when people campaigning for and covering awards have yet to be fully fried by the “Groundhog Day"-esque slog of the campaigns.

The spotlight was especially intense at this year’s Globes because it was Hollywood’s first high-profile awards ceremony since accusations of sexual harassment against Harvey Weinstein, among many other powerful men, came to light.

Earlier, untelevised prize parties flew under the radar, and left the issue of sexual misconduct either ignored (as at the Governors Awards of the Academy of Motion Picture Arts and Sciences) or glancingly mentioned (i.e., the funereal Gotham Awards, which was perhaps the first time after the allegations that dozens of former Weinstein employees found themselves in the same room).

The Globes also took place less than a week after hundreds of powerful women in entertainment unveiled the Time’s Up initiative, which includes a $15 million legal defense fund for victims of misconduct, among other components.

Time’s Up’s timing was, so to speak, golden, as would be expected from women with a firm grasp on the art and power of marketing. News that women would be wearing only black gowns to the Globes and eschewing talk of fashion and brands to highlight gender disparities only whet the media’s whistle. (That said, I heard ample mention of labels on the red carpet, as I was sandwiched alongside a correspondent from InStyle.) The same novel excitement will probably extend to the Screen Actors Guild Awards on Jan. 21, when, thanks to a plan hatched by two women overseeing the show, the host (Kristen Bell), along with the awards presenters, will all be — with possibly a few exceptions — women.

The Oscars, have a hard act to follow, and not just because they’re a way more snoozy event that doesn’t allow attendees to drink at their seats. The academy and the show’s broadcaster, ABC, have a financial interest in high ratings, and a sense of decorum adds a leaden note to the show. The academy has more than 8,000 members and multiple branches, so even when many people agree on a cause, like fighting #OscarsSoWhite, there can still be all-white acting nominees two years in a row. Who ends up attending or being invited to the Oscars will also play a big role. The narrative of this year’s Globes was set less by the show’s organizers and host, Seth Meyers — though he deserves every kudo for artfully threading a very tricky needle — than by the women who attended and were heavily involved in Time’s Up, including America Ferrera, Eva Longoria, Kerry Washington and Reese Witherspoon. Because the Oscars award movies, there will be far fewer television actresses on hand.

Although there may be organizing among actresses once the Oscar nominations are announced on Jan. 23, potential nominees like Meryl Streep (for “The Post”) and Michelle Williams (“All the Money in the World”), who each brought feminist activists as their plus-ones to the Globes, have a heftier load to carry. And will best actress front-runners like Frances McDormand (“Three Billboards Outside Ebbing, Missouri”), Saoirse Ronan (“Lady Bird”) and Sally Hawkins (“The Shape of Water”) publicly endorse Time’s Up as heartily? McDormand delivered a ferocious acceptance speech after winning the Globe for best actress, saying she was delighted “to be part of the tectonic shift” in Hollywood’s power structure, but also that she keeps her politics private.

And the Oscars are not happening until March 4, a long way off. Lest we forget, the tone of the 2017 awards seasons was also set at the Globes, when Meryl Streep delivered her “hooks in my heart” speech calling out Donald Trump a week and a half before his inauguration. The 2017 Screen Actors Guild Awards rode a similar wage of outrage. Held nine days after Trump became president, and two days after his administration hastily instituted its chaotic Muslim travel ban, the SAGs were suffused with a sense of urgency as actors, one by one, announced their opposition.

By the time the Oscars rolled around a month later, the anti-Trump jokes and declarations felt predictable and played out, and ended up being overshadowed by a best picture mix-up for the ages.

This year’s Oscars could also end up being a minefield of awkward male moments. One potential nominee, James Franco (“The Disaster Artist”), who won the Globe for best actor in a comedy or musical, is facing — and denying — rumors of sexual impropriety. Dustin Hoffman, who has also denied allegations, could also be on hand as he was at the Governors Awards. It is still unclear whether Casey Affleck, who nabbed an Oscar last year for “Manchester by the Sea,” will carry on the tradition of best actors awarding the best actress trophies. (Affleck is dogged by settlements he made with two women who said he sexually harassed them in 2010, and faces a lose-lose situation whether he shows up or not.)

Some have suggested that women would make the biggest statement by simply not attending the big awards, or that the pre-event red carpet peacocking should be done away with altogether. At the Globes, I floated the idea of getting rid of the carpet to Amy Poehler, who replied, “I think we should get rid of all awards shows, so I’m all for that.”

Of course, by boycotting the event, women would be handing all of the on-camera time over to men. And, if reactions to Sunday’s Globes are an indication, audiences want to see women at awards shows for reasons that run far deeper than ogling pretty dresses. They want to be inspired, and listen.