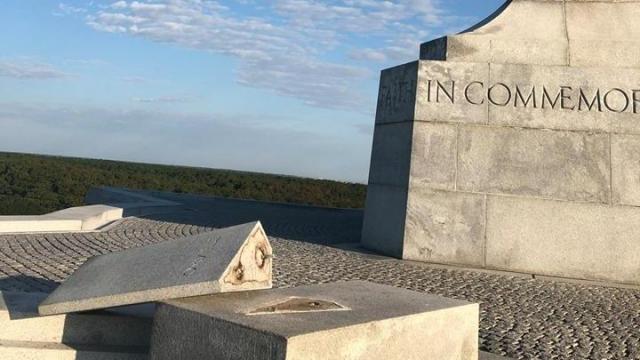 Kill Devil Hills, N.C. — A bust of Orville Wright has been stolen from the Wright Brothers Memorial, and the monument base has been damaged, officials said Sunday.

The memorial sits atop Big Kill Devil Hill in the Outer Banks and features busts of Orville and Wilbur Wright. This marks the third time the Orville bust has been stolen, said Ashley Dickerson, a ranger with the National Park Service, explaining that Orville was also stolen in 1985 and 1987 but recovered both times.

The Wilbur bust has also been taken in the past, officials said.

According to a Facebook post from the Wright Brothers National Memorial, the heavy, 300-pound granite base holding Orville Weight was toppled over and damaged either Saturday night or early Sunday morning.

It is not clear why the bust was stolen.

The theft and vandalism is under investigation by the National Park Service Rangers and local law enforcement officials. People with information are asked to call or text the ISB Tip Line at 888-653-0009.

Big Kill Devil Hill may be closed to visitors on Sunday while authorities investigate.