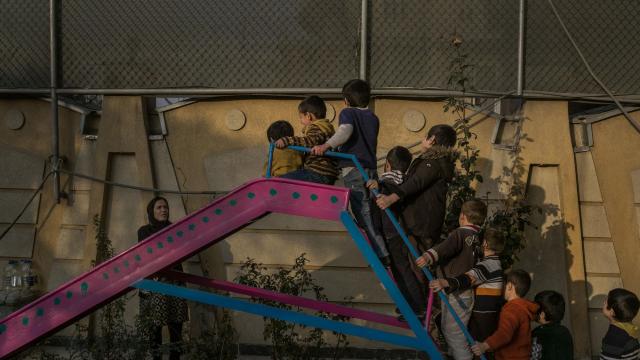 KABUL, Afghanistan — On visiting days in the women’s wing of Pul-e-Charki prison in Kabul, Najia Nasim would regularly see a young girl named Dahlia waiting outside her mother’s cell, standing up straight, wearing a small backpack. Inside the backpack were all of the girl’s clothes and a few personal possessions.

Nasim goes to the prison regularly to look for children who are older than 5, and thus eligible to be freed and put in one of her organization’s orphanages. These are children who are in prison only because their mothers are there, with no one else in their family willing or able to take them.

Dahlia was hardly bigger than a toddler, but her mother claimed she was 5, which Nasim did not believe; 4 at most, she said.

“Her mother would always say, ‘The last time when you didn’t take her, she cried all day.’ She begged me please take her,” Nasim said. Their orphanages were not equipped for children younger than 5, but Dahlia was advanced for her apparent age, toilet trained and able to dress herself, and Nasim finally gave in. “I couldn’t help it,” she said.

Now the girl is among 108 children at the Children’s Support Center in Kabul, an orphanage run by Women for Afghan Women and financed by the U.S. government as a refuge for the children of imprisoned mothers. Nasim is the group’s country director.

Most of the women in Afghan jails are there for morals crimes, such as abandoning abusive husbands or having been charged with “attempted adultery,” which is the suspicion of leaving home to commit adultery.

The women are hardly career criminals; most want what is best for their children, and that is not an adult jail, Nasim said. “Some of them have been so desperate they threaten that they’ll start beating their children if we don’t take them.”

When journalists from The New York Times visited the group’s Kabul center recently, Dahlia had only been out of prison a few months, and had not yet started going to school. (The school year ends in early December in Kabul.) But the girl had already learned how to sing the Afghan national anthem, which she did, solo and a cappella, to applause from the center’s staff. Some 55 staff members, mostly women, work there.

Women for Afghan Women runs four children’s support centers around the country, housing 356 children. The future of those centers, however, is endangered.

The U.S. government expects the Afghan government to take over financing the orphanages, but Afghan officials say they do not have the funding or capacity to do so. U.S. financing was continued recently for one more year, but is expected to run out after that, according to Afghan government officials.

The children in those centers are the lucky ones. At least 333 other children, from newborns to 18-year-olds, are incarcerated with their mothers in 33 prisons throughout the country, according to a Times survey this month; 103 of them are older than 5. One of them, a girl named Meena, 11, was born in jail and has roomed with her serial killer mother ever since. Her mother refuses to allow her to leave prison, but even if the woman agreed, there is no facility to take her in the city of Jalalabad.

Dahlia’s mother was sentenced to 18 years in jail last year for a murder she and her husband committed. Dahlia served the first year of her mother’s sentence with her in Pul-e-Charki, where prison populations are running at double the facility’s capacity, according to a recent study by Integrity Watch.

If the children’s centers end up closing, it would double the population of innocent children in Afghan jails.

“These vulnerable and unaccompanied children are easy prey for terrorists and criminals alike,” said Manizha Naderi, executive director of Women for Afghan Women. “With the cutting of aid to projects around the world by the Trump administration, the future is unknown,” Naderi said.

Women for Afghan Women, which runs an extensive network of shelters and other facilities for vulnerable women and girls in Afghanistan, began opening the orphanages in 2009. “Since then, with generous U.S. government support, we have offered lifesaving services to over 1,100 children whose families could not afford an alternative care while their mothers were serving their time in prison,” Naderi said.

The centers’ supporters say they have been more successful than they originally imagined was possible. The children are taken to normal public schools in buses, but aside from occasional outings, most of their free time is spent in the center, where extra tutoring is available. The result is grades for the centers’ children far above the average for children from less troubled homes — generally in the 90th percentile or better, according to Nasim. One of the Kabul center’s high achievers was Laila Rasekh, 19, who did so well that she won scholarships first to a high school in India, and then to college. She now studies at Ashoka University in Haryana, India.

Rasekh said her mother forced her into prostitution beginning at the age of 8. When her mother was sentenced to five years in prison for that crime, Rasekh would have had to join her mother in jail, even though she was a prosecution witness against her.

Women for Afghan Women found out about Rasekh, however, and brought her to the child support center, where she spent five years before going on to India. “If the CSC or WAW wasn’t there, if I had gone with my mother, I would have been in one of the prostitution centers in Kabul now,” Rasekh said.

What is needed is more such centers, not the closure of the few that now exist, said Bashir Ahmad Basharat, director of the Child Protection Action Network, a joint government and private sector partnership that brings charities, international organizations and government agencies together to support child welfare programs.

“There’s a massive need to have more of these support centers,” Basharat said. “But the U.S. government says the Afghan government should take over the ones there are, and the government can’t afford even to support those four. If you close them, these kids will be forced back into jail with their mothers, or worse.”

Dahlia is precocious for a 4- or 5-year-old, so a staff member at her center asked how life in the center compared to prison.

“I was never in prison,” she said, earnestly. She looked around, nervously, as if checking to see if anyone was contradicting her. “I like it here.”