Orionids Meteor Shower 2021: Here's how to watch it peak this week 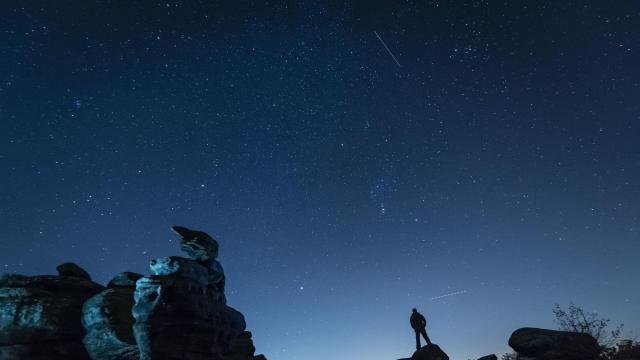 This latest episode of cosmic action in the night sky is the Orionids meteor shower. The monthlong event will peak overnight, on Thursday.

But if you are thinking about staying up late for the show, keep in mind that a nearly full moon is likely to outshine some of the tantalizing streaks that observers can easily spot on darker nights.

What are meteor showers?

Earth passes through trails of debris spewed from comets and asteroids as it circles the sun. Stray remnants of these trails get swept into the planet’s atmosphere, and they become meteors when they burn up there. The result: meteor showers, also nicknamed “shooting stars,” which can last from dusk to dawn and dazzle the night sky with quick streaks of light.

The Orionid meteor shower is the latest event, and its meteors are made from material left behind by Halley’s comet. That celestial celebrity visits Earth’s solar neighborhood once every 76 years, leaving a messy trail of rocky material that hangs out in our planet’s orbital path around the sun for the decades between each visit. From Oct. 2 through Nov. 7, some of that cosmic material splashes into Earth’s atmosphere at speeds of up to 148,000 mph, with peak activity in late October.

The Orionid shower has a twin, the Eta Aquariid meteor shower, which is also formed from leftover crumbs of Halley’s comet. It appears in May as Earth crosses that stream in another part of its orbital path.

On normal nights, you could spot about 10 to 20 meteors per hour, according to the International Meteor Organization. The Orionids in 2006 through 2009 were some of the most active, offering 50 to 75 streaks per hour. But this year’s Orionids won’t seem nearly as spectacular. That’s because the moon will be 99.87% full, washing out many of the streaks you could otherwise spot in a much darker sky.

Late Wednesday night and in the wee hours of Thursday during the Orionids’ peak, find an outdoor location with a wide, unobstructed view of the night sky. The wider your view is, the greater the chances you’ll spot a meteor streaking across the sky. And the farther your viewing location is from cities and traffic that give off light pollution, the better.

The Orionids are visible in both Northern and Southern Hemispheres. NASA recommends setting up a sleeping bag and lying flat on your back, taking in as much of the night sky as possible. The action lasts from midnight to dawn, but mainly takes place in the hours after midnight.

Look for the meteors near the Orion constellation, which sits in the southwestern night sky for those in the Northern Hemisphere, or the northwestern sky for those in the Southern Hemisphere. But be sure to keep an eye wide open — using binoculars would narrow your field of view. Longer meteor streaks will show up about 45 to 90 degrees away from the Orion constellation, NASA says.

Although there’s no escaping the light pollution beamed from the moon, hope isn’t entirely lost. The meteor shower lasts until Nov. 7, so you have a few more nights to catch the last meteors if you don’t spot any during its peak. This article originally appeared in The New York Times.