Origin Story of El Chapo: Scrappy and ‘Very Poor,’ According to One Witness 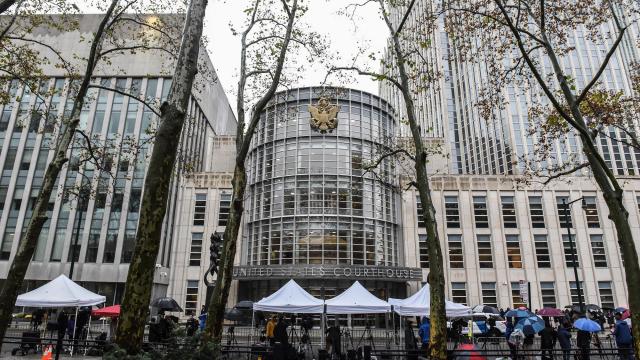 NEW YORK — The small plane, filled with a ton of Colombian cocaine, ran out of fuel as it approached the secret airstrip near Agua Prieta, Mexico. Directed by a Mexican guide, the pilot landed the craft but couldn’t slow it down. Both of its engines had died.

As the plane came skidding to a halt, the wheels snapped off, the guide told jurors Monday.

And the million-dollar cargo?

That harrowing, but ultimately successful, flight was Miguel Angel Martínez’s first full mission as an employee for a newcomer in the drug trade, a young ambitious trafficker named Joaquín Guzmán Loera. Well before he earned a billion-dollar fortune and was known to the world as El Chapo, Guzmán was the leader of a scrappy narcotics startup, shipping drugs for Colombia’s more powerful cartels and earning profits at a less-than-even split.

In his first day as a witness at Guzmán’s drug conspiracy trial in U.S. District Court in Brooklyn, Martínez described the early days of his former boss’ career, providing something like a portrait of the kingpin as a young man.

Prosecutors are using Martínez to tell what amounts to Guzmán’s origin story. Given his long friendship with the defendant, prosecutors have gone to great lengths to protect him.

Martínez testified Monday that he was a founding member of Guzmán’s initial crew, taking a job with him in 1987 as a pilot and later running his Mexico City administrative office.

Though it eventually employed hundreds of people, Guzmán’s operation had only about 25 people in the late 1980s when it was just beginning, Martínez said. In those early days, the budding crime lord was cutting deals with Colombian suppliers as part of a larger organization, the Guadalajara drug cartel. Among those on his payroll were two of his cousins, Hector and Arturo Beltrán Leyva, who moved product north across the border to Los Angeles. A lawyer who was largely responsible for bribing the police was also part of the crew.

Martínez, who started as a pilot, soon became a kind of air traffic controller, scheduling and tracking dozens of flights carrying drug shipments from Colombia to a network of Guzmán’s hidden airstrips.

He testified that he communicated by code with the pilots: fuel was “wine,” he said, and the planes were referred to as “girls.” To avoid police detection, he added, he would whistle to the pilots to let them know when it was safe to take off.

Martínez’s success in taking Colombian cocaine safely into Mexico, he explained, endeared him to Guzmán, who soon became his son’s godfather. The two men also started traveling together, Martínez recalled: once to Los Angeles, where Guzmán spent $6 million buying airplanes, and then to Las Vegas, where they gambled.

Guzmán also opened up to him, Martínez said, telling him how he got his start in dealing drugs by cultivating marijuana near his home in Sinaloa, Mexico, and making heroin by scraping — “little by little every morning” — the milk-like sap out of the poppies he had planted.

“He was a very poor person who didn’t have anything to eat,” Martínez said. “And that was the reason why he got involved in drug trafficking.”

But Guzmán did not stay poor for long. In a bit of back story that was part of Martínez’s testimony in a trial in 2006, he said Guzmán owned at least three Lear jets and moved about with an entourage of gunmen, shuttling among multiple homes in multiple Mexican cities. In one of those homes, there was a hidden compartment underneath a bed that raised off the floor on a hydraulic-powered lift. Guzmán also had a zoo in Guadalajara, Martínez noted in 2006, where he kept lions, tigers, crocodiles and bears.

Some of El Chapo’s fortune was used to buy off the authorities, Martínez told the jury Monday, including the chief of Mexico City’s federal police. According to Martínez, Guzmán paid the police chief $10 million two or three times in the early 1990s. In exchange, he said, the chief gave the kingpin information about drug investigations and helped him track down his enemies and rivals.

At least twice since he was arrested by the Mexican authorities in 1998, assassins have tried to kill Martínez. The first attempt on his life came shortly after he was taken into custody. A group of killers confronted him in prison, stabbing him repeatedly. After a second knife attack, he testified at the separate trial in 2006, someone threw two hand grenades into his cell. He survived, he said, by hiding behind his toilet bowl.

Because of the threats he has faced, prosecutors in the case have taken several extraordinary measures, forbidding artists at the trial from sketching any portion of his face. The prosecutors even won permission from Judge Brian M. Cogan to check and evaluate the sketches before they were removed from the courtroom.

Despite these precautions, there was a small breach in security Monday afternoon. Guzmán’s wife, Emma Coronel Aispuro, somehow — against the rules — sneaked a cellphone into the courthouse just before Martínez took the stand. Coronel, a former beauty queen, has attended the trial each day since it began two weeks ago, and this was the first time she had caused any trouble.

Cogan had a simple a solution to the problem. He ordered her to relinquish her phone and pass through the metal detectors again.