Orange County, N.C. — Search crews on Friday found a missing Orange County woman who suffers from dementia after she walked away from her home two days ago, authorities said.

Orange County officials said rescue crews found Maryanne Rosenman, 75, in a drainage ditch in a heavily wooded area between her home and where she was last seen by a motorist during the predawn hours.

The team that found her had begun their search shortly before 11 a.m. The area they had canvassed had already been searched two times in the past, officials said.

"Our emotions today are happy right now," Saunders said. "We're happy that she’s found. We recovered her (and) we’ve been successful, and it's also important that none of us were hurt."

Rosenman wandered out of her home wearing just her nightgown and sneakers, the Orange County Sheriff's Office said.

Many of the people who had participated in the search for Rosenman were volunteers, and teams had come from as far away as South Carolina to join in the effort to find her.'

Orange County Sheriff Charles Blackwood said, "This is as good an outcome as we could’ve ever hoped for."

Crews reunited the woman with her husband, sister and son shortly after she was found.

This family has been through a lot," Blackwood said.

The crews had focused on a 1-square-mile area near the New Hope Fire Department, which had served as the command post for the search effort.

WRAL meteorologist Kat Campbell said Rosenman was out during a heat index that hit 109 degrees on Wednesday and 102 degrees on Thursday. A half-inch of rain had fallen in the area from the day Rosenman disappeared until 11 a.m., the time she was found.

Rosenman was last seen by a driver around 3:15 a.m. after she left her home, the sheriff's office said. 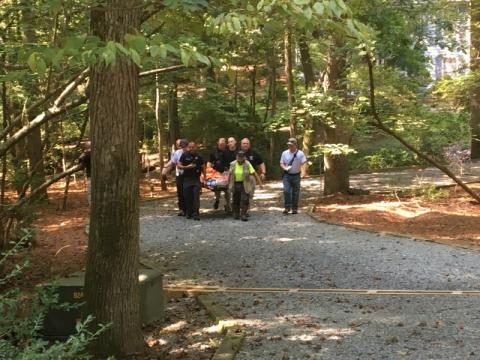 The searchers had conducting rescue efforts on foot, by air with a helicopter and by scent by using volunteer search dogs.

"I'm still looking to the sides for signs where someone has gone off the trail," said Bobby Williams, of Civil Air Patrol.

Many of the searchers, including Williams, are trained volunteers because officials say the terrain is too rugged for the general public.

"We have rolling hills, a creek back there and a lot of rocks," Williams said.

The search is focused along Whitfield Road, where the Orange County sheriff says Rosenman was seen by a driver before her husband noticed she was missing.

"We train at least twice a month," Tubb said, adding that he and his dog found a missing person a few months ago.

Kirby Saunders, from the Orange County EMS, said, "This is going now into a multi-state search. We have resources from South Carolina (and) as far away as Brunswick County in North Carolina."

The search crews say they are keeping in mind the tendencies of those with dementia.

"If there's somewhere you'd look at and think there's no way someone could get there, we want you to try to look in there," Saunders said. "That's just the statistics of someone with dementia."

For the rescue teams, the searches can get personal, and emotional.

Said Williams: "You're hunting for someone, you know. You want to find them. It's family, not ours but somebody's."