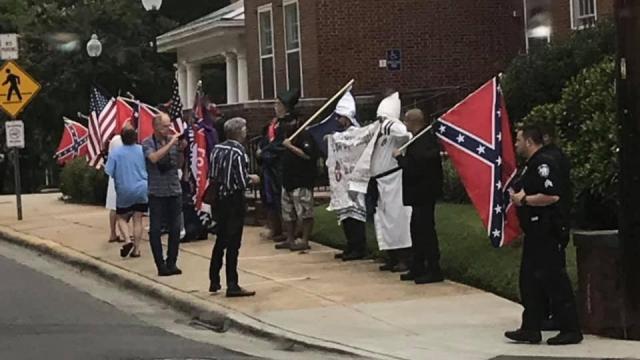 Hillsborough, N.C. — Law enforcement authorities in Orange County said they have obtained warrants for the arrests of two people who allegedly had guns on them during a KKK rally Saturday night outside the Orange County Justice Facility, authorities said.

Investigators from the Orange County Sheriff's Office and Hillsborough police reviewed photos and videos of protestors and counter protestors, which allowed them to conclude that the two participants had weapons.

Authorities have not yet publicly identified the two suspects, and officials said they are trying to serve them with the arrest warrants.

The KKK demonstration in Hillsborough at the justice complex, located on East Margaret Lane, caused a big stir Saturday in the town.

Hillsborough police told WRAL News on Saturday that they had officers at the scene, along with Orange County deputies.

Hillsborough town officials released a statement, saying the participants did not have a permit and police had no advance notice about the protest.

"I am grateful and applaud the citizens of Hillsborough for turning out,” Mayor Tom Stevens said last weekend, “for standing by each other, and for standing together to demonstrate to the world that the toxic, KKK, neo-Confederate, white-supremacist message has no place in our community. None.

The KKK members and counter-protesters began dispersing around 6:30 p.m., and no injuries were reported.

Sheriff Charles Blackwood said in written statement Monday that officers did not see anyone with guns during the protest.

“If the weapons had been viewed during the demonstration, officers would have made arrests," Blackwood said.

According to Hillsborough officials, North Carolina law does allow people to openly carry weapons, but that right is limited during events like parades, protests and demonstrations.