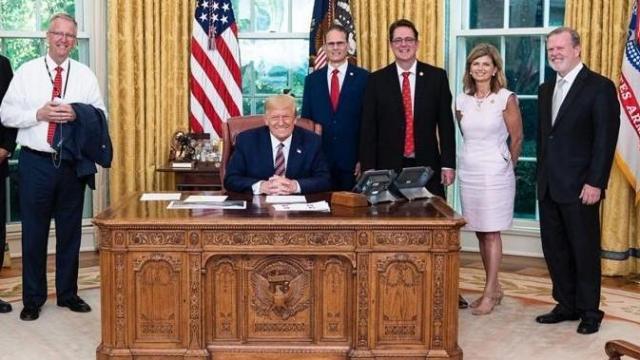 Private schools look to new air filtration systems to limit virus spread in classrooms (WRAL-TV reports) -- A group of private schools in the Triangle announced July 17 that it is upgrading its ventilation systems, and school officials say the change could prevent the spread of coronavirus when classes start. "We want to make sure that Thales schools are as healthy as possible," said Brandon Hafner, manager of corporate operations for CaptiveAire Systems, which produces commercial kitchen ventilation systems and is owned by Bob Luddy, who founded the Thales Academy chain. CaptiveAire plans to put a dedicated outdoor air system, or DOAS, in each Thales building. Unlike traditional HVAC systems that recirculate about 90 percent of indoor air, DOAS is capable of bringing in 100 percent outside air.

Many NC private school classrooms are opening for in-person learning (N.C. McClatchy reports) -- As a growing number of North Carolina public schools decide to start the school year with online classes because of the COVID-19 pandemic, many of the state’s private schools are planning to reopen with face-to-face classes. Private schools aren’t subject to the same rules that govern how the K-12 public schools can reopen, such as limits on building capacity and the requirement that face coverings be worn by all students and teachers. Still, private school leaders say they’ll use many of the same safety measures that public schools must do, such as daily temperature checks, increased cleanings and maintaining social distancing.

FERREL GUILLORY: Beyond federal aid, will North Carolina also step up? (EdNC column) -- State legislators and local officials, school superintendents and teachers, the unemployed, renters and food-insecure, all in uncertainty, await a second round of coronavirus relief from a fragmented federal government. Regardless of the outcome of negotiations in Washington, North Carolina will face, in the not-so-distant future, the question of how much the state itself should invest in its own pandemic recovery and rebuilding.

THOM TILLIS: How we win the war against COVID-19 (Fayetteville Observer column) -- In many ways, wearing a mask not only helps slow the spread and saves lives, it also helps save jobs and gets our fellow North Carolinians back to work sooner.

As COVID-19 cases surge among Latinos, NC leaders amplify messages of preventive measures (N.C. McClatchy reports) -- Four months into the pandemic in North Carolina, Latinos account for at least 45% of the state’s 106,800 confirmed cases, a disproportionate number compared to the state’s Latino population. With Latinos facing challenges getting tested, and others being turned away at hospitals for lack of insurance, the state called on the heads of the Guatemalan and Mexican consulates in Raleigh to share messages about how to be safe and find help during the pandemic. Dr. Mandy Cohen, secretary of the state’s Department of Health and Human Services, said they were invited to make “an urgent call” to the Hispanic and Latinx communities. Influential leaders are needed to “turn up the volume,” Cohen said, in making sure people know about taking preventative measures to curb the spread of the contagious virus.

CAMPAIGN 2020
Trump to visit Triangle next week (WRAL-TV reports) -- President Donald Trump will be in the Triangle on Monday to tour a Morrisville plant that is making key components of a potential coronavirus vaccine. The trip will be Trump's 10th to North Carolina as president and his first since the pandemic began.

Trump Abruptly Cancels Republican Convention in Florida: ‘It’s Not the Right Time’ (New York Times reports) -- After forcing the convention to move from Charlotte to Jacksonville because he wanted a big celebration, President Trump called off the Florida portion, citing the health risks from the coronavirus.

Trump calls off big Florida GOP convention rally; NC events still on (AP reports) -- Bowing to the coronavirus threat, President Donald Trump scrapped plans for a four-night Republican National Convention celebration in Florida that had been set to draw more than 10,000 people to a pandemic hot spot to mark his renomination. Trump had already moved the convention’s public events out of Charlotte because the state would not yeild to his demand for a mass indoor rally. But the spiking virus shifted south, too, and the planned gathering in Jacksonville increasingly appeared to be both a health and political risk. Trump and his advisers feared that going forward with big parties and “infomercial” programming in Florida would ultimately backfire on the president.

Trump abruptly cancels RNC in Jacksonville, a month before it was to start (Charlotte Observer reports) -- President Donald Trump abruptly canceled the Jacksonville portion of the Republican National Convention Thursday, throwing the event into chaos a month before it’s scheduled to start. Trump had forced Republicans to move the event to Florida after failing to get guarantees he could have a full house in Charlotte because of the coronavirus. But Jacksonville, like the rest of Florida, has been hit with a surge of COVID-19 cases. Trump said Thursday it was irresponsible to hold the convention there.

N.C. group asks judge to stop touch-screen voting (AP reports) -- The N.C. NAACP has asked a judge to bar the use of a touch-screen voting machine in several counties due to what it says are heightened risks associated with using them during the coronavirus pandemic. The request made to a Wake County judge says the ExpressVote machines create “unique and substantial risks to the lives and health of voters” because they will be touched by many people, The Charlotte Observer quotes the request as saying.

MOSTLY TRUE: Biden says he warned about the pandemic 'in January' (PolitiFact/WRAL-TV) -- When presumptive Democratic presidential nominee Joe Biden appeared on the July 20 premiere of Joy Reid's MSNBC show, "The ReidOut," he repeated an assertion about how he was more aware of the risks of the novel coronavirus early on than his opponent, President Donald Trump.

Cooper and Forest pitch their agendas to NC’s tech industry at virtual summit (N.C. McClatchy reports) -- Gov. Roy Cooper and his challenger in the November election, Lt. Gov. Dan Forest, addressed North Carolina’s tech industry on Thursday, appearing virtually at an annual conference to highlight how their agendas mesh with the state’s growing tech economy. The event, hosted by the North Carolina Technology Association, gave each candidate a few minutes to speak via video, and both focused heavily on education. “We must invest in education from cradle to career,” Cooper said. “One of my top priorities is getting North Carolina job-ready. That means helping people get the skills they need for better-paying jobs, and then connecting businesses to those skilled workers.” Forest called for transforming the state’s K-12 schools system “with real computer science curriculum, so that we can fill the pipeline that you so desperately need filled and create well-paying jobs in all communities across our state.”

In the room where it happens: Steinburg, NC leaders meet with president (Elizabeth City Daily Advance reports) -- State Sen. Bob Steinburg, R-Chowan, describes his opportunity to meet with President Donald Trump at the White House last week as a once-in-a-lifetime experience. Steinburg and six other leading Republican members of the General Assembly, including Senate President Pro Tem Phil Berger, traveled to Washington, D.C., on Thursday, July 16, to attend a speech by the president on the high costs of government bureaucracy and red tape.

POLICY & POLITICS
Jobless claims rise as cutoff of extra $600 benefit nears (AP reports) -- The nation got another dose of bad economic news Thursday as the number of laid-off workers seeking jobless benefits rose for the first time since late March, intensifying concerns the resurgent coronavirus is stalling or even reversing the economic recovery.

UNC research: Areas hardest hit by coronavirus face greater challenge to get students back in the classroom (WRAL-TV reports) -- A research team from the University of North Carolina at Chapel Hill released findings on Thursday about how the coronavirus has impacted the state disproportionately.

More parents consider 'micro-schooling' to keep kids on track and back-to-work (WRAL-TV reports) -- Parents are weighing their options when it comes to school for their kids amid the pandemic. Some are turning to "micro-schooling," a buzzword with very broad meaning.

UNC system says no refunds on tuition, fees if pandemic forces return to online-only classes (WRAL-TV reports) -- Students at UNC system schools won't get a break on tuition or fees this year if the coronavirus forces campuses to return to all online classes. Colleges and universities around the country are cutting tuition and fees when in-person classes are shifted online because of the pandemic, but the UNC system won't be following their lead. The UNC Board of Governors voted to keep tuition and fees, including athletics and student activity fees, the same this year, regardless of whether students are physically able to attend classes on campus.

Put high school football on hold (Greensboro News & Record editorial) -- On a sun-broiled morning, several dozen Guilford County students, coaches and parents gathered to make a case for fall sports. As the coronavirus surges in North Carolina, it’s still unclear as to when — and whether — there will be any fall sports this school year.

ENERGY & ENVIRONMENT
Smokies, parkway to benefit from Outdoors Act (Asheville Citizen-Times reports) -- Blue Ridge Parkway scenic overlooks might soon look more “scenic” with regular mowing and vegetation clearing, its narrow, two-lane roadway and tunnels less crumbling. The Great Smokies’ Depression-era roads, buildings, water systems and 800 miles of trails would get spiffed up and safer. That is the hope for the Great American Outdoors Act, one of the biggest investments in American public lands in decades, which passed a House vote July 22 and is now headed to the president’s desk for his signature. The bill will aid in the protection of Western North Carolina conservation land and water quality by permanently funding the Land and Water Conservation Fund at $900 million a year, and will help to rebuild the Great Smoky Mountains National Park’s and the parkway’s crumbling infrastructure, along with maintenance needs at 400 other national parks, with up to $6.5 billion over five years. Voting for the bill in the House were: Ted Budd; G.K. Butterfield; Alma Adams; Virginia Foxx; Patrick McHenry, Greg Murphy and David Price. Voting against it were Dan Bishop, Mark Rouzer and Mark Walker. Not voting, George Holding and Richard Hudson.