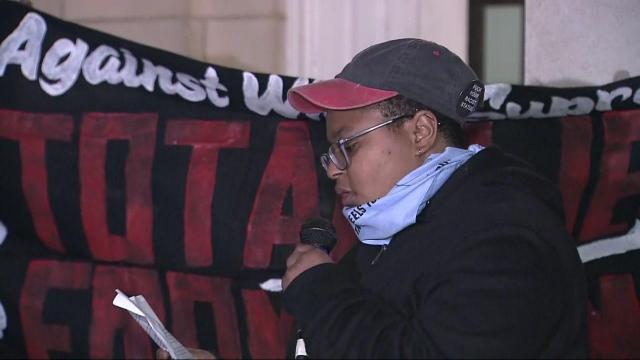 Tuesday, Dec. 4, 2018 -- A round up of opinion, commentary and analysis on: UNC leaders propose 'Silent Sam' remain on campus in new building, N.C. midterm debacle shows us where the real threat to elections lies, lawmakers try once again to restructure state elections board, building a road map for student safety and more.

SILENT SAM STAYS
SARAH KRUEGER & CANDACE SWEAT: At protest, UNC's 'Silent Sam' plan is not enough (WRAL-TV reports) -- A couple hundred people gathered on the campus of UNC-Chapel Hill to protest the plan by the university Board of Trustees to bring a controversial Confederate monument back to campus.

SCOTT JASCHIK: New Campus Home for Silent Sam (Inside Higher Ed reports) – UNC-Chapel Hill's board and chancellor on Monday unveiled a plan to return Silent Sam, a statue of a Confederate soldier, to campus. The statue would be housed in a new building that would cost more than $5 million to construct and $800,000 a year to maintain.

SARAH KRUEGER & EMMY VICTOR: UNC leaders propose 'Silent Sam' remain on campus in new building (WRAL-TV reports) -- UNC-Chapel Hill officials said they don't believe a controversial Confederate monument should be returned to its pedestal on campus. The school's Board of Trustees presented a plan for "Silent Sam" that will be sent to the UNC Board of Governors for approval this month. Following a closed-door session, Chancellor Carol Folt and other officials proposed that Silent Sam not be returned to its former home on McCorkle Place. Instead, the board proposed that the statue be displayed in an indoor location on campus.

JONATHAN DREW: Uproar over UNC proposal for building for Confederate statue (AP reports) – N.C.'s flagship university proposed to move a toppled Confederate statue into a new $5 million building on the outskirts of campus, seeking to balance security with strict state historical laws in a step that triggered an uproar by chanting demonstrators who took to the streets after nightfall.

JANE STANCILL: Protesters march, call for strike of UNC professors and teaching assistants (Durham-Herald Sun reports) — Several hundred demonstrators marched the streets of Chapel Hill and amassed around the boarded up base of the Silent Sam Confederate statue at UNC-Chapel Hill on Monday night, calling for a strike of graduate student teaching assistants.

UNC shouldn’t build a shrine for Silent Sam (Charlotte Observer) — It was a good bet that UNC’s plan for Silent Sam was going to be criticized regardless of what the administration came up with. But the instant uproar on Monday could not be dismissed as only that, because few had envisioned a proposal this outrageous in 2018: Spending 5.3 million of NC taxpayers’ dollars to build an on-campus shrine to the racially motivated Confederate monument and then spending $800,000 every year to protect it.

REAL VOTER FRAUD?
KIRK ROSS & AMY GARDNER: N.C. election-fraud investigation centers on operative with criminal history who worked for GOP candidate (Washington Post reports) -- In a low-slung, aging commercial strip across the street from an online-gaming parlor here, a local operative named Leslie McCrae Dowless ran his command center for Republican Mark Harris in the 9th Congressional District primary. Dowless sat at a desk at the back of one of the strip’s vacant storefronts, where he oversaw a crew of workers who collected absentee ballots from voters and updated the Harris campaign on the numbers, according to Jeff Smith, who is the building’s owner and a former Dowless friend. Smith provided his account about the primary campaign to state investigators, who are examining whether Dowless’s activities then and in the general election violated N.C.’s election laws, which allow only individual voters or designated close relatives to mail a ballot.

N.C. midterm debacle shows us where the real threat to elections lies (Washington Post) -- Republicans have spent the past decade crying wolf over voter fraud as a pretext for imposing needlessly complicated ID requirements. These laws tend to discourage Democratic-leaning voters. Yet if there is any threat to the integrity of the franchise, it is absentee ballot fraud — which GOP voter-ID laws cannot deter. And the face of this phenomenon in 2018 might well turn out to be a Republican candidate.

ALAN BLINDER: Disputed N.C. Race May Hinge on a Shadowy Operative (New York Times reports) -- L. McCrae Dowless Jr. was a peculiar politician when he stood before the State Board of Elections: a runaway winner who had come to the capital to fan fears of fraud and to protest the outcome of a race in which he had been victorious.

MAGGIE ASTOR: N.C.’s Election Turmoil - What We Know and Don’t Know (New York Times reports) -- A congressional race in N.C. that seemed to be settled on election night was reopened last week amid allegations of absentee ballot fraud. The Republican candidate, Mark Harris, has a 905-vote lead over the Democrat, Dan McCready. Here’s what we know, and what we don’t know.

JOE BRUNO: Channel 9 uncovers similarities between absentee ballots in U.S. House District 9 race (WSOC-TV reports) -- Channel 9 found what appears to be a targeted effort to illegally pick up ballots, in which even the person picking them up had no idea whether those ballots were even delivered to the elections board. Consistently, Channel 9 found the same people signing as witnesses for the people voting, which is very rare. Of the 159 submitted and accepted absentee ballot envelopes, below is the breakdown of those who signed as witnesses: Woody Hester witnessed 44; James Singletary witnessed 42; Lisa Britt witnessed 42; Ginger Eason witnessed 28; Jessica Dowless witnessed 15 ; Cheryl Kinlaw witnessed 13; Deborah Edwards witnessed 11; Sandra Dowless witnessed 10.

TIM FUNK: Alleged fraud clouds N.C.’s 9th District vote. Is a new election possible? (Charlotte Observer reports) -- If N.C. has a new election for the 9th congressional district, it will apparently be the first time in state history that alleged fraud has caused voters to go to the polls to vote a second time.

Voting irregularities must be cleared up (Winston-Salem Journal) -- What in the world is going on in North Carolina’s 9th Congressional District? The eyes of the nation are now on that region, where credible allegations suggest fraud could have changed the outcome of the Nov. 6 election for that seat.

LEGISLATURE – OVERTIME SESSION
LAURA LESLIE: Lawmakers try once again to restructure state elections board (WRAL-TV reports) -- After a court order in November threw out GOP lawmakers' latest attempt to give themselves appointments on the state elections board, legislative leaders have filed a proposal to split the agency into two boards and make other changes.

GOP proposes another retooled elections board (AP reports) -- Republicans in the legislature have offered another alternative to resolve a longstanding legal battle with Democratic Gov. Roy Cooper over the state elections board.

TRAVIS FAIN: Bill emerges to protect Wake County fire station (WRAL-TV reports) -- Fairview Fire Station No. 2 faced the possibility of closure, but a bill would remove it from Wake County's jurisdiction to keep it open.

RONALD WRIGHT: Yes, Jury Selection Is As Racist As You Think. Now We Have Proof (New York Times column) — A new study from NC confirms some long-held folk wisdom about race and juries. The good news is there are two simple solutions.

GILBERT BAEZ: Soldier remembers thrill, honor of soaring with former President Bush (WRAL-TV reports) -- After his retirement, former President George H. W. Bush got his adrenaline fix by sky-diving. He made at least three tandem jumps with the U.S. Army Golden Knights, once for the dedication of his presidential library in Texas and the other two for his 85th and 90th birthdays.

10 Librarians Each Receive $5,000 Prize (AP reports) -- Nancy Daniel, librarian from rural North Carolina who helps patrons navigate the internet was among 10 winners of the I Love My Librarian Award.

HEALTH
TAYLOR KNOPF: New Residency Program Aims to Keep Doctors in the Rural Southeast (NC Health News reports) — Southeastern Health is looking to train physicians in Robeson County with the hope that they will stick around and work locally.

COLIN CAMPBELL: Opioid recommendations (The Insider reports) -- Judges could grant exceptions to mandatory minimum sentencing rules for drug convictions under recommendations approved Monday by a legislative task force. The Task Force on Sentencing Reforms for Opioid Drug Convictions included the recommendation among several others in its final report, which will likely result in proposed legislation during next year's long session.

MAXIM TAMAROV: Area municipalities continue to bounce back after Hurricane Florence (Jacksonville Daily News reports) -- Hurricane Florence caused nearly $516 million worth of structural damage in Onslow County. As a result, local government agencies have pushed back some projects or, like many residents have had to do, dipped into savings to cover the cost of recovery efforts.

ANTIONETTE KERR & CYNTHIA HOWARD: Healthy Homes Needed for Endangered NC Birds (Public News Service reports) -- The Fourth National Climate Assessment released by the federal government outlined the impacts of severe weather on the nation. N.C. isn't immune to the risks that climate change is creating - but there are plans to help some species make a comeback. During Hurricane Florence, southeastern N.C. suffered damage to long-leaf pine forests. Zach West, Southeastern Coastal Plain land steward with The Nature Conservancy, said that, in turn, created problems for another species - the endangered red-cockaded woodpecker. He said these woodpeckers are the only ones in North America that create nesting cavities in live pines - a process that takes years.