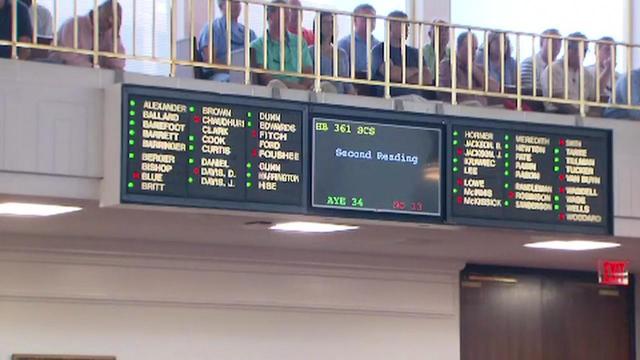 LEGISLATURE 2018
In style, substance, this budget is bad (Fayetteville Observer) -- The only thing less surprising than Gov. Roy Cooper’s veto of the just-passed state budget was lawmakers’ swift move to override it. Cooper vetoed the $23.9 billion budget plan late Wednesday afternoon. By lunchtime Thursday, the Senate had already stomped it to death with a 34-13 vote. House Speaker Tim Moore was in a little less of a rush to bash the governor and said the House would likely take its override vote early next week.

Voter ID is back in N.C., and the justifications are as lame as ever (Charlotte Observer) – N.C. Republicans want a constitutional amendment requiring photo ID to vote. A federal court struck down an NC voter ID law in 2016, and the idea hasn't gotten any better since then.

GARY ROBERTSON: Voter ID proposed again, this time as change to N.C. Constitution (AP reports) -- Republicans are poised again to advance a photo identification requirement to vote, despite their previous attempt getting struck down by federal judges.

TAYLOR KNOPF: Prison Safety Bill Debate Gets Surprisingly Contentious (N.C. Health News reports) -- A debate over inmates' use of rude gestures and aggressive throwing of bodily fluids turns surprisingly sharp in the wake of the recent deaths of correctional officers.

TRAVIS FAIN: Bill would up loan origination fees (WRAL-TV reports) -- Legislation moving at the statehouse would let banks triple origination fees on loans under $20,000. The new fee cap would be $150, the first increase since 1991. This would be part of a sliding scale of fees contained in House Bill 810, with the fee for loans under $100,000 topping out at $250. Above that, it would be based on a percentage.

TAYLOR KNOPF: New Opioid Bill Gets Support from Law Enforcement, Concern from Recovery Advocates (N.C. Health News reports) -- The HOPE Act is seen as an extension of the STOP Act, which limits opioids prescribing. But advocates are concerned that this second bill allows law enforcement too much access to patient information.

School displays of US, N.C. mottos approved by House (AP reports) -- Public schools would have to display the official U.S. and N.C. mottos in prominent areas in legislation that's cleared one General Assembly chamber.

MATTHEW BURNS: Putting US, NC mottoes in schools gets House OK (WRAL-TV reports) -- Public schools statewide would have to display the U.S. motto "In God We Trust" and the North Carolina motto "Esse Quam Videri" under legislation House lawmakers approved.

The wrong script for school days (Greensboro News & Record) -- Review the school and testing calendars and create some flexibility that empowers districts to vary. Potential school-is-out days could be reduced and classes managed more efficiently. And such flexibility could create more opportunities for students and teachers to, say, take in a movie outside the classroom.

CAMPAIGN 2018
Why both Republicans and Democrats see guns as a winning issue in N.C. (Charlotte Observer reports) -- After school shootings in Parkland and Santa Fe, guns figured to be a big issue for Democrats this election year. But they've also become a big issue for NC Republicans. They frame the issue as upholding the Second Amendment.

N.C. Democrats, GOP gather for conventions (AP reports) -- Activists for the state's major political parties are gathering separately this weekend for their annual conventions to energize the faithful heading into the fall elections.

Stormy Daniels storms into Raleigh with politically laced strip show (McClatchy Newspapers) -- Stormy Daniels sprang onto The Men’s Club stage draped in a costume patterned like a flowing American flag, which she slowly shed down to a red, white and blue garter and a star-spangled thong. As she danced topless for Raleigh. Jimmy Creech, who was seated with his wife, Chris Weedy, waited three hours to cheer on the stripper and porn actress Creech called “an American hero.” “We just admire her willingness to challenge the dishonesty of Donald Trump,” he said. “To call him out on that and take it as far as it can go.” spectators.

ADAM OWENS: Due to late order, some NC probation officers forced to share bulletproof vests (WRAL-TV reports) -- Probation officers in the Triangle are among those sharing a crucial item to make sure everyone stays safe.

DR. JULIE LINTON & DR. ALAN SHAPIRO: Family separation violates pediatricians' responsibility to protect children (Winston-Salem Journal column) -- A pediatrician’s core professional responsibility is to protect the health and well-being of children. We emphasize prevention, diagnose and treat acute and chronic illnesses and react to emerging conditions. We also do everything in our power to respond to public health threats.

EDUCATION
LISA PHILIP: Anxiety, Then Relief, For NC 3rd Graders Taking End-Of-Grade Testing (WUNC-FM reports) -- Third graders at Smith Elementary School in Burlington took a break from class on a recent Friday afternoon to reflect on what school had been like lately.

MARK JOHNSON: Advice, life lessons for the class of 2018 (Wilson Times column) -- Graduation is here for our high school seniors. I want to take a moment to offer unsolicited advice to the young adults starting off on their next steps (and their loved ones who will hopefully cut this out of the paper or share it on Facebook for them to read). First, some quick advice on life. It’s short and goes by faster than you can imagine.

ENERGY & ENVIRONMENT
Mapping can slide no longer (Hendersonville Times-News) -- Tucked in the almost $24 billion state budget Gov. Roy Cooper vetoed — a move Republican leaders are sure to override — is $3.6 million to revive a landslide mapping program the state stopped funding in 2011. It can’t come too soon. Landslides triggered by the remnants of tropical storm Alberto caused three deaths in Western N.C. A Polk County woman died May 18 when her garage was crushed during one slide.

VAUGHN HAGERTY: GenX aware-Old assumptions, new attitudes (Coastal Review analysis) – Second part of series on the anniversary of the first GenX news report, examining what has changed in terms of the public’s awareness and how they may vote.