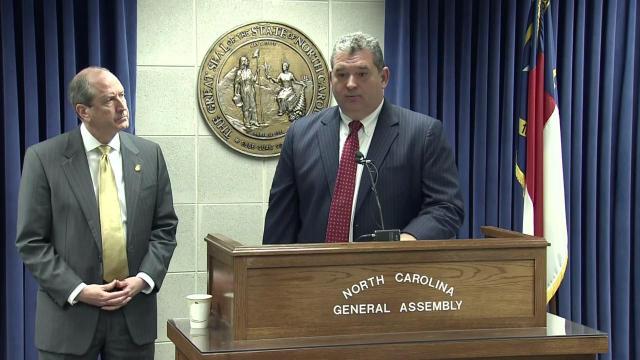 REAL ELECTION FRAUD?
FALSE: Woodhouse says NC elections board received "no calls" after alerting Bladen County voters to possible absentee ballot fraud. (PolitiFact reports) -- On Jan. 17, N.C. GOP Executive Director Dallas Woodhouse tweeted about what he referred to as “huge news” about the investigation. The elections board “sent (a) letter to every person requesting a mail ballot in Bladen, (but) received no calls to the hotline number provided,” Woodhouse tweeted on Jan. 17. Is it true that no one from Bladen County called the state elections board with tips? No. Here’s how the mix-up happened.

MATTHEW BURNS: New NC elections board named, allowing 9th District investigation to proceed (WRAL-TV reports) -- After more than a month without a State Board of Elections, Gov. Roy Cooper named five people to the reconstituted board. The absence of the board has stalled an investigation into alleged absentee ballot fraud in the 9th Congressional District race.

Elections board returns (Fayetteville Observer) -- The State Board of Elections has come back to life, after going missing for more than a month. That’s good news, because there’s some pressing business to do. The board was disbanded in December after a panel of state judges ruled that Republican lawmakers had overstepped their constitutional authority when they revamped the board.

GENERAL ASSEMBLY 2019
COLIN CAMPBELL: Huge raises for legislative leaders staff while other state workers got little (The Insider reports) -- Senate leader Phil Berger and House Speaker Tim Moore have seen a lot of turnover on their staffs since 2017, but some of the staffers who stuck around have been rewarded with pay increases of 20 to 50 percent. By contrast, most state employees received a $1,000 raise in 2017 and a 2 percent raise in 2018.

LAURA LESLIE: More balance means more deliberation in NC House this session (WRAL-TV reports) -- Cooperation and compromise is the name of the game in the General Assembly this year. Although Republicans still control the House and the Senate, they lost veto-proof majorities in both chambers following the November elections. That means, for the first time since 2012, the GOP will have to work with legislative Democrats and with the governor to get things done.

N.C. Chief Justice Replacement Plea (The Insider reports) -- A group of more than 50 House Republican legislators wrote to Gov. Roy Cooper on Thursday asking him to replace N.C. Supreme Court Chief Justice Mark Martin with "someone with a similar ideological background and pedigree."

POLICY & POLITICS
PAUL KANE: Trump N.C. ally Meadows holds fast to hardball tactics despite shutdown fallout (Washington Post reports) -- Less than a month into his new world order, Rep. Mark Meadows (R-N.C.) could not believe the House majority’s tactics in trying to embarrass President Trump and his GOP colleagues. Meadows spent the previous six years as a conservative firebrand who perfected the art of political stunts that could grind the House, and often all of Washington, to a halt. Now he has to learn an entirely different role, a work that is still in progress as Republicans have been banished to life in the House minority. He admits that he saw the majority as likely lost late last summer, before the November midterm elections delivered a body-blow loss of 40 Republican seats.

JOHN WAGNER: GOP Sen. Scott remains opposed to Trump judicial nominee from N.C. (Washington Post reports) -- Last year, Sen. Tim Scott (R-S.C.) torpedoed the nomination of Thomas A. Farr to a U.S. District Court seat in North Carolina after questions emerged about how much Farr knew about a decades-old effort to disenfranchise black voters. A meeting between the two men on Wednesday didn’t change how Scott sees things. Scott, the sole black Republican in the Senate, issued a statement questioning why conservative allies of Farr are continuing to push President Trump to renominate him to the federal bench.

Could Florence prompt another big insurance hike? (Wilmington Star-News reports) -- Topsail Island Realtors told one could be coming -- and soon.

PATRICK WOODIE: We need ‘spark plug’ leaders to drive rural NC (Durham-Herald Sun column) — In 2018, it was a tale of two North Carolinas: a story showing both our geographic vulnerabilities and our economic strengths. It was a year of headlines and hard lessons. Our state’s continued economic strength topped national lists, making North Carolina, once again, a great place to live and work, while the lethal winds and floodwaters of Hurricane Florence twisted a harrowing slate of headlines last September.

BILLY MADDALON: On taxes: You can’t have it all, Mecklenburg (Charlotte Observer column) — I’ve raised Cain for 10 years about one-party rule in Raleigh. The absence of even a stiff breeze to slow hyper-partisan government has led to extreme outcomes. The Republican super-majority has done what it wanted, because it could. And now with Democrats in the absolute majority on the Mecklenburg Board of Commissioners, just the possibility there’s little diversity of thought is concerning, for all the same reasons it was in Raleigh.

Abandoning Afghanistan is a dangerous decision (Fayetteville Observer) — The president is suddenly in a rush to get American forces out of Afghanistan. It’s hard to overstate how dangerous that could be. And if it leaves the country with the Taliban in charge again (the fundamentalist group is already in control of large swaths of the nation’s countryside, small towns and some larger cities), we expect it won’t be long before the country is also the willing host for all manner of murderous fanatics from various terror groups. In other words, we might end up with the same Afghanistan we entered shortly after the Sept. 11, 2001 terror attacks on the United States. Is that what we want?

EDUCATION
UNC Chancellor Folt: 'I did what I thought was best, and I'm at peace with that' (WRAL-TV reports) --- Chancellor Carol Folt's last day at UNC-Chapel Hill, but there's still no word on who will oversee the campus come Friday.

UNC-Chapel Hill head leaves after Confederacy tiff (AP reports) -- The head of the country's oldest public university is saying goodbye to the North Carolina campus she's leaving after a tiff over a Confederate monument.

RACHEL JONES: Include transparency in the chancellor search (Daily Tar Heel column) -- I and many students have been rendered cynical by the UNC-Chapel Hill administration's unwillingness to listen. I love UNC. I would not do this job as editor-in-chief if I didn’t love UNC. But with that love comes expectations — expectations of transparency, of access, of truth. Students and journalists both deserve more time with the University’s next chancellor, to ensure that the institution can live up to its promise to be a university of the people. I don’t think that’s too much to ask. I don’t think I should have to ask in the first place.

KATHRYN BROWN: Harassing, teasing, threatening: Are NC schools doing enough to identify, stop bullying? (WRAL-TV reports) -- 19 percent of kids in N.C. say they've been bullied. So why are so many schools reporting zero bullying incidents to the federal government? New bullying data released from the 2015-2016 school year and state Superintendent Mark Johnson defines bullying and how he plans to address the issue.

T. KEUNG HUI: NC charter schools have nearly doubled since 2011. Some say it’s time for a new cap. (Charlotte Observer reports) -- The number of charter schools in North Carolina has nearly doubled since the 100-school limit was dropped in 2011. But Public Schools First NC is calling on state legislators to put on a new cap while the program undergoes a comprehensive review.

FERREL GUILLORY: What a Fed caution means for NCeducation (EdNC column) — When the Federal Reserve speaks, however inscrutably, investors listen. School teachers, not so much. And yet, the Fed sent a cautionary signal this week that bears on North Carolina’s budgetary ability to pay teachers as professionals and otherwise support schools, colleges, and universities.

LIZ BELL: Who’s making state-level education decisions? (EdNC reports) — The governance and policymaking of education in NCis comprised of many bodies and decision-makers. Who exactly is in charge is a question that has been argued in court over the last year. Gov. Cooper, in a short interview with EducationNC, expressed his view on what can feel like a disjointed system.

ENERGY & ENVIRONMENT
DAN NEIL: A Solar-Powered Dream Home, With the Electric Vehicle to Match (Wall Street Journal column) -- with an electric car you can—if geography and zoning laws allow—make your own fuel. And the way you do that is to lay out for a proper home solar-power station, grid-tied or off-the-grid, the full doomsday prepper kit. I’m going with a grid-tied system. In effect I will be offsetting my nighttime EV charging with what juice I sell back to the grid during the day. I understand not everybody is in a position to do what I am describing. I’ve been planning it for a while. … Why would I undertake such a project? It’s not primarily about reducing my carbon footprint or even my electric bill. I live in North Carolina, which is becoming increasingly popular with devastating hurricanes. In the past three years we’ve had our power knocked out a half-dozen times, for spells lasting up to a day. There are parts of the state that didn’t get power back for weeks after Hurricane Florence. It’s not that I’m hunkering down for the End Times. I just don’t want the venison to defrost.

CHANTAL ALLAM: With NC cleantech industry booming, companies go on the hunt for talent (WRAL-TV/TechWire) -- More than a dozen companies turned out for the Cleantech Connect Career Fair at the McKimmon Conference and Training Center in Raleigh looking for workers.

Protect the Corolla wild horses (Winston-Salem Journal) -- For many of us, the wild horses on the Outer Banks, though a good 300 miles away, are treasures that appeal to our wild nature. Unfortunately, these horses are facing severe threats from disease and encroaching development. U.S. Sen. Thom Tillis of North Carolina wants to help.

… AND MORE
Remarkable Black Women and Men We Overlooked (New York Times reports) -- The ragtime master Scott Joplin and the blues singer Gladys Bentley. They are among many black men and women – several from North Carolina -- whose deaths The New York Times overlooked, until now.

WIL HAYGOOD: Overlooked, Scott Joplin, Ragtime Master Who Wrote ‘The Entertainer’ (New York Times reports) -- When Scott Joplin’s father left the North Carolina plantation where he had been born a slave, there was one thing he wanted to hold on to: the echoes of the Negro spirituals he had heard in the fields. In those songs he found a sense of uplift, hope and possibility.