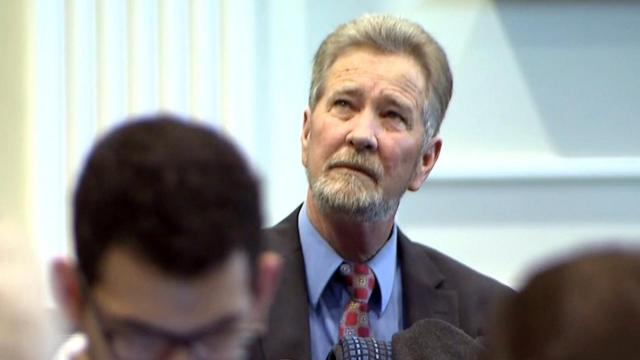 ALAN BLINDER: In N.C., Investigators Find Ballot ‘Scheme’ in House Race (New York Times reports) -- A political operative working on behalf of a Republican candidate for Congress oversaw an illegal absentee ballot “scheme” and went to elaborate lengths to conceal it, a state election official said at a hearing that could settle the final undecided House race of last year’s midterms. The spare and harsh allegation of a “coordinated, unlawful and substantially resourced” strategy opened the State Board of Elections hearing with the first public pronouncement of state investigators’ conclusions about a get-out-the-vote effort they came to believe was endemic with fraud and misconduct to benefit Mark Harris, the Republican candidate in the Ninth Congressional District.

MILES PARKS: N.C. Officials Examine Fraud Charges In Disputed Congressional Election (NPR reports) -- A hearing enters its second day in the case of the state's 9th Congressional District — investigators are unveiling evidence about an illegal absentee ballot scheme that may have swayed the election.

MARTI MCGUIRE: Official Cites 'Unlawful' Balloting in U.S. Congressional Vote (Reuters reports) -- A Republican operative directed an unlawful absentee ballot scheme in North Carolina's 9th congressional district and tried to hide the evidence, an election official said on Monday at a hearing that could lead to a new vote in the disputed contest.

GENERAL ASSEMBLY 2019
FRANK TAYLOR: Domestic violence in spotlight during forum on lawmaker’s home turf (Carolina Public Press reports) -- With state Rep. Cody Henson, R-Transylvania, having recently been served with a domestic violence order of protection, state and local organizations concerned about domestic violence conducted a forum Monday night at Brevard College in Brevard. A judge is expected to rule on whether to grant his estranged wife a permanent order at a hearing Tuesday, also in Brevard. Representatives from SAFE and Helpmate, domestic violence agencies serving Transylvania and Buncombe counties respectively, spoke at the event along with the North Carolina branch of the National Organization for Women and Progress NC.

COLIN CAMPBELL: Court Shrinkage (The Insider reports) -- The N.C. Court of Appeals would no longer shrink to 12 judges under a bill that's moving quickly through the N.C. Senate. Filed Monday, Senate Bill 75 would simply repeal a law passed two years ago that reduces the number of judges from 15 to 12 by deleting seats as current judges resign or retire -- a move that effectively deprived Democratic Gov. Roy Cooper of the power to fill those vacancies. Cooper sued over the law, but a trial court ruled in favor of the legislature last April. An appeal on the matter is pending, but Sen. Ralph Hise, R-Mitchell and sponsor of the bill, said Monday that he wants to resolve the legal battle. The lawsuit is headed to the Supreme Court, which now only has one Republican justice.

COLIN CAMPBELL: Unfair Committee Assignments (The Insider reports) -- While Democrats now make up 42 percent of the N.C. Senate, they hold a smaller percentage of seats on key committees -- and that's prompting criticism from one Senate Democrat.

ROBERT BROOME: NC Health Plan changes would put patients first (Durham-Herald Sun column) — How much are you paying for health care? You may say too much, you may even cite the cost of a recent procedure you’ve had, but do you know what the actual cost of care is? More importantly, do you know if it’s fair?

MICHAEL GARRETT: Enough is enough, time to expand Medicaid (Greensboro News & Record column) -- Since 2013, the North Carolina General Assembly has said, “Thanks, but no thanks” to billions of dollars to provide half a million North Carolinians with health care coverage. The reasons for this refusal have been ever-changing, but the effect of this decision is clear.

Bring back the film credits (Winston-Salem Journal) — Freshman state Sen. Harper Peterson has hit the ground running, filing a bill last week to restore the tax credits that once boosted NC’s booming film industry. His bill faces an uphill battle — especially since the legislature is still controlled by the Republicans who axed the credits in the first place. But it’s a start.

JANNETTE PIPPIN: Candidates begin announcing run for Jones seat (Jacksonville Daily News reports) - -As the wait continued for a decision on setting a special election, the first candidates for North Carolina’s vacant 3rd Congressional seat have announced plans to run for the office long held by the late Walter B. Jones Jr. The District 3 congressional seat for North Carolina is vacant following Jones’ death on Feb. 10, just months after his election in November to a 13th term. State Rep. Phil Shepard, of Onslow County and State Rep. Michael Speciale, of Craven County, both Republicans, plan to run for the congressional seat as does Phil Law, an Onslow County businessman and Marine Corps combat veteran who also ran for the seat in the 2018 GOP primary.

TEO ARMUS: ‘The whole community is terrified’: Hundreds rally against increased ICE presence in NC (Charlotte Observer reports) — A crowd of several hundred took to the streets Monday to protest increased immigration enforcement in NC — and the paralyzing fear they said it had instilled in Charlotte’s immigrant communities.

JOHN HINTON: SBI investigates computer use, clerk of court resigns in Davidson County (Winston-Salem Journal reports) -- Brian Shipwash, Davidson County’s clerk of court, resigned amid a State Bureau of Investigation probe into an allegation of improper use of state computers in the clerk’s office.

It’s time to get tougher on anti-vaxxers (Charlotte Observer) — Four years ago, NC lawmakers considered closing a loophole allowing parents to declare a religious exemption to vaccinations without showing evidence of their faith. It was a smart step to protect families from the misinformed irresponsibility of anti-vaccination parents, but lawmakers backed down in the face of small but furious protests.

JENNY BLACK: Alarm over late-term abortions is really about banning all abortions (Durham-Herald Sun column) — Inflammatory rhetoric surrounding a woman’s ability to access safe and legal abortion has flooded the media cycle in recent weeks. Having served in senior leadership for Planned Parenthood for 20 years, I know these types of attacks are nothing new.

EDUCATION
KELLY HINCHCLIFFE: NC schools chief boots teachers from invitation-only event, draws criticism (WRAL-TV reports) -- Superintendent of Public Instruction Mark Johnson plans to make a "major" education announcement in front of 700 invitation-only guests at the Raleigh Convention Center. But the event is drawing criticism from some teachers and parents who were turned away after trying to get tickets to the event online.

Edgecombe principal, 7 others competing for NC Principal of the Year (WRAL reports) — Eight public school principals have been selected as regional Wells Fargo NC Principals of the Year and will compete for the state title. The winner will be announced May 10 and will succeed the 2018 recipient, Tabari Wallace, principal of West Craven High in Craven County Schools.

JENNIFER ALLEN: Group to Honor Etheridge, Life-Saving Crew (Coastal Review reports) -- Capt. Richard Etheridge, a slave who was raised on Roanoke Island and taught to read and write, was the nation’s first African-American keeper of a U.S. Life-Saving Service Station. The Pea Island Life-Saving Station, of which Etheridge was appointed as keeper in 1880, also made history as the only station with an all-black crew for most of its time in operation. The nonprofit Pea Island Preservation Society is set to present “Freedmen, Surfmen, Heroes: The Unique Story of Richard Etheridge and the Pea Island Life-Savers,” at noon Saturday at the N.C. Aquarium on Roanoke Island.

Dead Humpback Washes Ashore (Coastal Review reports) -- A large humpback whale was discovered on the beach in Corolla early Sunday, the second whale within six days to beach along the Outer Banks.

…AND MORE
ADAM LUCAS: The toughest Tar Heel (GoHeels.com Reports) – Roy Williams has coached Tyler Hansbrough, and he's coached Raymond Felton, and he's coached Joel Berry. He knows toughness. He is an expert on the subject. Friday night, he sat with a 16-year-old girl who turns 17 this week. She can't dunk. She's never drawn a charge. She wasn't even able to carry her own bag when she checked in at the hospital in late January. And Williams saw undeniable toughness.

‘Lost Colony’ is still lost, but archaeologists are getting closer, expert says (Norfolk Virginian-Pilot reports) -- Archaeologists are getting closer to figuring out where members of the Lost Colony went, according to Nicholas Luccketti, the principal investigator and archaeologist with the James River Institute for Archaeology. Luccketti’s presentation in late January at the Isle of Wight County Museum in Smithfield focused on the "possible relocation" of some of the Roanoke Island colonists to a site in eastern North Carolina named Site X