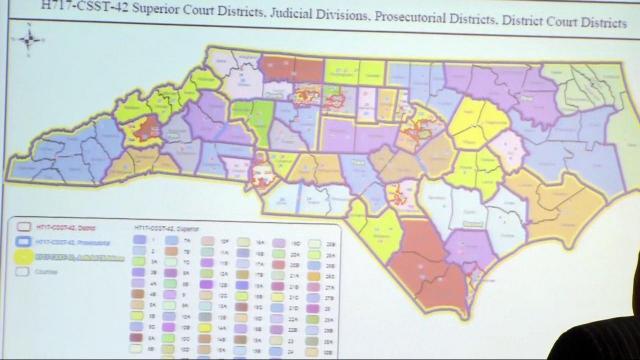 LEGISLATURE 2018
Whatever happened to budget debate? (Fayetteville Observer) -- In form and substance, this short-session’s budget adjustments are a sorry exercise that ignores some of the state’s most pressing needs. There’s little that can be done to address that now. But in November, we’ll see if the voters have noticed.

SCOTT SEXTON: Taxpayers get no say on state budget (Winston-Salem Journal column) -- Under the cover of darkness, the legislature let fly the $23.9 billion state budget in a conference committee report that brooks neither amendments nor much time for such funny business as actually reading it or debating its proposals. Both House and Senate are likely to hold votes on it by week’s end, and that has people concerned with such antiquated niceties as due process, good faith and transparency in the way government chooses to spend hard-earned public money. It all happened in warp-speed, and was done behind closed doors by a group of Republican legislators small enough to fit into a minivan. To get it done, leadership employed some mighty skillful parliamentary sleight-of-hand and misdirection.

Lawmakers ignore teachers at their own peril (Norfolk Virginian-Pilot) – N.C. educators this month protested in Raleigh to mark the start of the General Assembly session, calling for increased state support for public schools.

JIM MORRILL & MICHAEL GORDON: Bill would dramatically change the way your judges are chosen in Mecklenburg (Charlotte Observer reports) -- The way Mecklenburg County voters choose judges would change dramatically under a bill that passed the N.C. Senate and appears to be moving quickly through the General Assembly. The county's eight Superior Court judges, now elected from three districts, would run in eight under the bill. And the county's 21 District judges, now elected countywide, also would be elected from those eight districts.

JEFF TIBERII: Budget Diverts $50 Million From Childhood Development Programs (WUNC-FM reports) -- As state lawmakers work to quickly approve a budget, some children’s advocates are shining light on what they call a major missed opportunity for childhood development. Legislators in Raleigh are advancing a $23.9 billion adjusted state spending plan, and have pledged to send it along to Gov. Roy Cooper by the end of the week. The budget includes an additional $74 million in federal funding, which had been designated for early childhood development by the U.S. Congress. However, two-thirds of those funds are being re-routed, back into the general Department of Health and Human Services fund.

Panel OKs letting 4 N.C. towns operate charter schools (AP reports) -- Legislation allowing four communities close to N.C.'s largest city to apply for and operate their own charter schools has cleared a General Assembly hurdle. A closely divided Senate Education Committee voted to recommend the measure, which would apply only to the Charlotte-area towns of Matthews, Mint Hill, Huntersville and Cornelius.

TRAVIS FAIN: Bill to let towns start charter schools moves forward (WRAL-TV reports) -- "If these four cities want to screw themselves, I'm going to vote for them to do it," one senator said.

LAURA LESLIE: House leaders tout new infant tests (WRAL-TV reports) -- A provision in the state budget adds three tests to the infant screening panel. It also nearly triples the cost, but House leaders say it will save money over time.

JARED WEBER: Lawmakers Add Illnesses to Newborn Screening Testing (N.C. Health News reports) -- Once the state budget passes later this week, N.C. will come into line with other states in testing infants for genetic disorders, many of which had no treatment until recently.

MATTHEW BURNS: Fantasy sports bill proves nightmarish for sponsors (WRAL-TV reports) -- A year after one House committee voted down a proposal to regulate fantasy sports in North Carolina, the bill was yanked from a second committee, as the panel was poised to strike language from the measure stating that fantasy sports isn't gambling.

CAMPAIGN 2018
Let's be unanimous on elections reviews (Greensboro News & Record) -- That emerging political strategy of challenging the residency of an opponent took a concerning course last week. A specially appointed elections board in Rockingham County has ruled that Democrat Jen Mangrum had not established the residency to challenge powerful state Sen. Phil Berger (R-Eden) and Libertarian R. Michael Jordan in District 30. Let’s be clear: This isn’t a vote to override the board’s decision, but rather a suggestion that the path to that decision is potholed.

POLICY & POLITICS
DANA GOLDSTEIN & BEN CASSELMAN: Teachers find public support as campaign for higher pay goes to voters (New York Times reports) -- After shutting down schools and shaking up politics in six states, teachers are looking to the ballot box in their campaign for better pay and increased school funding. And their demands are meeting with widespread public support. Nearly three in four adults — 71 percent — considered teacher pay too low, while just 6 percent felt it was too high. And two-thirds said they supported increasing the salaries of public-school teachers even if it meant raising taxes. The teacher walkouts began in deep-red states such as West Virginia and Oklahoma, where teacher pay has tended to be lower than in other states, and spread quickly to North Carolina, Kentucky, Arizona and Colorado, racking up a list of concessions from conservative lawmakers.

CONNOR DELPRETE: Sen. Tillis confesses, 'We seriously diminished' film industry in Wilmington (WECT-TV reports) -- The film industry in Wilmington suffered after state lawmakers got rid of an incentive program and replaced it with a grant program in 2014. U.S. Sen. Thom Tillis, who served as the N.C. Speaker of the House when the decision was made, said they made the wrong choice. "We seriously diminished the impact that the film industry had on this part of the coast," Tillis said after a policy roundtable in.

VALERIE BAUERLEIN: Pothole Vigilantes Fill the Streets, Plugging Gaps Left by City Workers (Wall Street Journal reports) -- Volunteers in New Orleans show what can be done with beer, sliders and 700 pounds of quick-dry asphalt; someone googled, ‘How to fill a pothole.’

ALAN SUDERMAN: Virginia lawmakers approve Medicaid expansion (AP reports) -- The Senate passed Medicaid expansion by a 23-17 vote with four Republicans joining Democrats for passage. The budget still needs final approval from the House and Democratic Gov. Ralph Northam. But that's expected to happen with little difficulty. Northam is expected to sign the budget in coming days, and the roughly 400,000 newly eligible low-income Virginias will begin enrolling in Medicaid at the start of next year.

JIM MORRILL: Sen. Jeff Jackson is making a big push to elect N.C. Democrats. What's in it for him? (Charlotte Observer reports) -- The goal is to gain the four House and six Senate seats Democrats need to crack the super-majorities that allow Republicans to easily override vetoes by Democratic Gov. Roy Cooper. And it comes as redistricting, retirements and demographic changes have created more competitive legislative districts for Democrats.

RICK SMITH: Raleigh ranks No. 1 for housing, quality of life in new Amazon HQ2 site study (WRAL-TV/TechWire) -- A new study ranks Raleigh as No. 1 among the sites being considered for the Amazon HQ2 project when it comes to housing and quality of life.

MARTHA WAGGONER: Lawsuit: The poor shouldn't lose licenses over traffic fines (AP reports) -- Because he can't pay $228 in traffic fines, Seti Johnson faces revocation of his N.C.'s driver's license, which means he won't be able to drive to the job he hopes to get soon. For Sharee Smoot, the amount keeping her off the road is $648. In a federal lawsuit, attorneys for the two say N.C.'s practice of revoking drivers' licenses of people who can't pay their traffic fines and court costs is unconstitutional because it violates the rights to due process and equal protection under the 14th amendment.

Helping stop childhood hunger (Winston-Salem Journal) -- Times are tough. We appreciate Blue Cross and Blue Shield of N.C. stepping in to make them a little easier for some children and their families by covering the debt from unpaid student lunches in Winston-Salem/Forsyth County schools.

EDUCATION
ANDREW KREIGBAUM: Taking on the College Endowment Tax (Inside Higher Ed) – Bradley Byrne, a Republican member of the House education committee and former two-year-college leader, explains why he wants to repeal the college endowment tax and also describes where higher education is falling short. “First of all, it’s a new tax and I don’t know why in tax reform we’re talking about a new tax,” he said. “Secondly, I don’t like the policy concept of taxing charitable giving.” That’s especially problematic for college endowments, Byrne said, because money from endowments is used to provide financial aid to low-income students. He has a personal connection to that issue, having received campus-based financial aid to attend Duke University as an undergraduate.

ENERGY & ENVIRONMENT
EMERY DALESIO: Pork giant makes case that penned hogs are good neighbors (AP reports) -- The world's largest pork producer put its best case before jurors to debunk claims that its waste is responsible for stenches so foul and attracts so many flies that life for rural neighbors is miserable.

Mildred Council, pillar of Southern cooking, is dead at 89 (New York Times obit) -- Mildred Council, a slave’s granddaughter who opened a North Carolina restaurant that proved so successful she caught the attention of presidents, publishers and sports stars, died on May 20 in Chapel Hill, N.C. She was 89. The cause was complications of a stroke, her daughter, Spring Council, said.

JEFF HAMPTON: Hatteras lighthouse briefly goes dark for the second time this year (Norfolk Virginian-Pilot reports) -- The more than 200-foot-tall beacon went dark in January after severe winter storms and stayed out for more than a month until rare parts could be recreated by a company in Cincinnati.