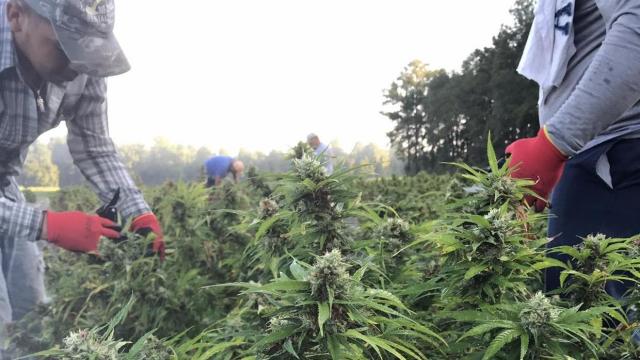 Thursday, Jan. 17, 2019 -- A round up of opinion, commentary and analysis on: Federal shutdown starting to leave mark, NC officials haven't handed over massive trove of voter data to feds, Silent Sam’s future far from settled, smoking banned in town of Elon, second chance for red wolves, industrial hemp and more.

REAL ELECTION FRAUD?
TYLER DUKES: NC officials haven't handed over massive trove of voter data to feds (WRAL-TV reports) -- A demand from the U.S. Department of Justice for data on N.C. voters has so far gone unanswered by state officials, despite a deadline to produce the records that passed this week.

Redo 9th District election from scratch (Greensboro News & Record) -- The 116th U.S. Congress is well under way, but short-handed, thanks to the vacant seat that represents North Carolina’s 9th House District. That’s because of election irregularities — and ensuing complications — that prevented the state elections board from certifying the results.

POLICY & POLITICS
SARAH OVASKA-FEW Federal shutdown starting to leave mark in NC (N.C. Health News reports) --The effects of the federal shutdown are being felt acutely in North Carolina. In North Carolina, an analysis by Governing magazine estimates 7,678 federal employees work at agencies where they're either being furloughed or working without pay. Of the nation's federal agencies, several such as the Departments of Defense, Health and Human Services and Veterans Affairs had their 2019 budgets approved before the stalemate over immigration and President Donald Trump's push to build a wall along the southern border. An estimated 800,000 workers have been furloughed, meaning they're not at work, while an additional 420,000, who are deemed essential, have been working without pay. Also affected are federal government contractors, who are not working, and may not see back pay once the government is back up and running.

MYRON PITTS: Shutdown affecting Rape Crisis of Cumberland County (Fayetteville Observer column) -- Last year the small staff at Rape Crisis of Cumberland County helped almost 600 victims of sexual assault. Sometimes it was just being that listening ear and the counseling voice on the other end of the 24-hour hotline. Most times it meant more. Such as accompanying a victim to the emergency room or the police department, to the courthouse or to support group.

JOSH BERGERON: Salisbury City Council passes resolution condemning lynchings, seeking racial reconciliation (Salisbury Post reports) -- In what Mayor Al Heggins called a tremendous day for Salisbury, the City Council on Tuesday unanimously approved a resolution condemning 1906 lynchings of three black sharecroppers, the murder of a family in their farmhouse the same year and manifestations of injustice as well as starting the process of racial reconciliation. "This is tremendous because it shows that we are a leading southern city, that we are the kind of community that can embrace the good and the tragic in our history and move forward," Heggins said. The resolution passed on what would have been civil rights icon Martin Luther King Jr.'s 90th birthday.

LAUREN HORSCH: Industrial Hemp (The Insider reports) -- The state's industrial hemp program saw exponential growth during 2018, according to numbers given to lawmakers during the Agriculture and Forestry Awareness Study Commission meeting Wednesday. Laura Kilian, legislative liaison for the state's Department of Agriculture and Consumer Services, said in February 2018 the state had 149 licensed industrial hemp growers, 2,500 licensed field acres and 322,000 licensed square feet of greenhouse production. As of Nov. 1, the state had 435 licensed growers, 6,740 licensed field acres and more than 2 million licensed square feet of greenhouse production. "So it's a very rapidly growing program," Kilian told lawmakers.

JANE STANCILL: After a whirlwind week in Chapel Hill, Silent Sam’s future is far from settled (Durham Herald-Sun reports) -- The future of the Silent Sam Confederate statue on the UNC-Chapel Hill campus remains up in the air as a rift developments between campus trustees and the UNC Board of Governors.

MARK JOHNSON: I’m mad as hell, and I’m not gonna test it anymore! (EdNC column) -- As state superintendent of North Carolina’s public schools, I often hear from other leaders that standardized tests help hold students, teachers, and schools accountable. Accountability is important for our schools but also for our leaders. The testing system that the education-industrial complex built over the past decade forces our students and teachers to endure too many high-stakes tests layered on by federal, state, and local authorities. It must stop.

CAROLINE PARKER: Faithfully serving rural NC (EdNC reports) — Among the nation’s most populous states, “NC has the largest proportion of individuals living in rural areas,” says Rebecca Tippett of Carolina Demography. Our state is second only to Texas in rural population.

JIM GOODNIGHT: Change NC’s Pre-K funding to reach more children (Durham-Herald Sun column) -- Almost 33,000 NC four-year-olds could not go to preschool today – even though they are eligible for one of the highest quality programs in the country. Why? In large part because of the way state funding for that program – NC Pre-K – is structured. Too many NC counties simply do not have the necessary funds to augment state funding, and too many struggle to find teachers, classrooms and transportation.

MARK BARRETT: Sale of Mission gets OK from state AG Josh Stein (Asheville Citizen-Times reports) -- State Attorney General Josh Stein said Wednesday he will allow HCA Healthcare's purchase of Mission Health to go through without a legal challenge after negotiating changes to the deal designed to protect the public. A review by the state Department of Justice, which Stein heads, is the biggest regulatory hurdle the sale must clear to take effect. His announcement could mean the nearly $1.5 billion deal will take place soon.

MAGGIE BROWN: Smoking banned in Town of Elon (WRAL-TV reports) -- Smoking, vaping or carrying a lighted tobacco product will now be prohibited in all public areas in the town of Elon, according to the town's updated Code of Ordinances.

ENERGY & ENVIRONMENT
DAVID BORAKS: DEQ Meetings Look At Duke's Plans To Leave Coal Ash In Place At 6 Plants (WFAE-FM reports) -- The state Department of Environmental Quality has begun public meetings to discuss how coal ash should be cleaned up at six Duke Energy sites around the state. They include plants on Lake Norman and Lake Wylie. Coal ash is what's left after coal is burned to produce electricity, and it contains toxic elements such as arsenic and selenium. About 150 million tons of it have piled up over the past century at Duke Energy's 14 current and former coal plants in North Carolina.

Second chance for red wolves (Fayetteville Observer) — Just as we were getting ready to say goodbye — again — to the country’s tiny and endangered population of red wolves living in the wild, we get a remarkable surprise from an improbable place. Researchers reported last week that they found a pack of wild canines around a Texas Gulf Coast beach that carries a substantial amount of red wolf genes. Wildlife biologists say this finding may be evidence that red wolf DNA may more resilient than anyone might have guessed, despite decades of being the target of hunters, loss of habitat and a host of other factors.

State should help fund water project (Fayetteville Observer) — Cumberland County commissioners plan to extend public water mains to parts of the Gray’s Creek area where wells have been contaminated with GenX and other chemicals from the Chemours plant. They’re hoping the state will pick up some of the tab for the project, which is expected to cost nearly $20 million.

AND MORE…
Veteran N.C. journalist Gene Price dies at 90 (AP reports) -- Hillery Eugene "Gene" Price, an honored journalist whose career spanned nearly six decades, died Wednesday. He was 90. Sue Price Johnson, his daughter and former Associated Press staffer, said her father died at a hospice in Raleigh after a long illness. Gene Price became editor emeritus at the Goldsboro News-Argus after a nearly 50-year career during which he served as managing editor as well as editor.

BRIE HANDGRAAF: Bill Ellis Barbecue closes its doors (Wilson Times reports) -- Bill Ellis Barbecue closed Wednesday after nearly 56 years of serving Wilsonians and visitors alike. “It is with much regret that we have reached a decision to close Bill’s Barbecue,” Tanya Neville said in a written statement. “Against all obstacles, we fought the good fight, but realized it’s time.”

Barbara Proctor, first African American woman to own an advertising agency, dies at 86 (Washington Post reports) -- The company was called Proctor and Gardner Advertising. But there was only one founder behind it — Barbara Proctor, maiden name Gardner, the first African American woman to own and operate an advertising agency. Mrs. Proctor, who died Dec. 19 at 86, grew up in a North Carolina shanty, stopped and stayed in Chicago when she ran out of money on her way back from a summer job in Michigan, and made her way into the white- and male-dominated ranks of the advertising industry in the 1960s.