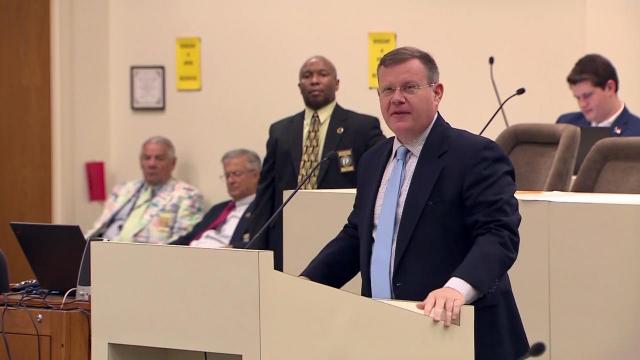 LEGISLATURE 2018
Thwarted Before, GOP Seeks Photo ID Through Amendment (WUNC-FM reports) -- Republicans have been thwarted by veto and federal judges this decade to require photo identification to vote. Now they're hoping state residents will cement the mandate by amending the state constitution.

Crime victims, judicial vacancy amendments before Senate (AP reports) -- Constitutional amendments to expand crime victims' rights and alter how trial and appellate judge vacancies are filled are getting heard in the state Senate as the legislative session winds down.

Governor signs debt bill for road-building boost (AP reports) -- Gov. Roy Cooper says a method for borrowing up to $3 billion to keep N.C. road building robust for the next several years is a good example of both major parties working together to help the state's economy.

Bill follows through redrawing Asheville's districts (AP reports) -- Election districts in Asheville would be redrawn because city leaders failed to do so under legislation moving through a General Assembly chamber.

LIZ SCHLEMMER: Post-Parkland bills to increase NC school psychologists appear stalled for this session (WUNC-FM reports) -- Lawmakers focused on improving school safety for months have planned to address a significant shortage of school psychologists, but none of the related bills filed by legislators look like they are going anywhere during this legislative session.

TAYLOR KNOPF: Legislative Health Care Round Up (N.C. Health News reports) -- It's a busy time of the year at the NC General Assembly, and a lot of bills are moving fast. We'll track some of the health care bills that got attention.

RICK HASEN: Parties in N.C. Gerrymandering Case Spar Over Whether Supreme Court Should Hear Case or Remand (Election Law Blog) -- The Court had the case on its conference docket for today, but it is possible these supplemental briefs will further delay disposition of the case. I discussed in my recent Slate piece about Gill how the North Carolina case could be the next vehicle to consider these issues, though it might face a remand to reconsider standing questions in light of Gill. Paul Clement, defending the state general assembly, has been arguing that there’s a standing problem (and therefore remand in light of Gill is appropriate). But here’s his “To be sure” paragraph that makes his argument tough.

POLICY & POLITICS
CULLEN BROWDER: Central Prison manager who was attacked may have been targeted (WRAL-TV reports) -- A supervisor who was beaten and stabbed at Central Prison may have targeted for attack because he has repeatedly been accused of abusing inmates. Unit Manager Brent Soucier, 44, remains hospitalized in stable condition.

DAVID CRABTREE: Highway Patrol commander on Raleigh man's beating: 'It saddens me' (WRAL-TV reports) -- With two state troopers fired and a sergeant on desk duty following an April incident in which a Raleigh man was beaten, Col. Glenn McNeill, commander of the State Highway Patrol, said that the 1,600 troopers statewide must be held to a high standard.

EDUCATION
FERREL GUILLORY: Civic lessons from a ‘rock star’ N.C. mom (EdNC column) -- As endearing as was her tender handling of her son, especially remarkable was what Monica Raab actually had to say in her five minutes before the Matthews council in late April. Raab grew up in Oklahoma, married a Duke law school graduate now at a Charlotte law firm, and earned a master’s degree in public administration from the University of North Carolina at Charlotte. She told the council that they chose Matthews for its small-town feel with big-city resources. Raab began with a couple of practical objections: the potential for increased traffic with charter schools not providing bus rides and the prospect of higher local taxes. Then she moved on to a serious, widespread concern stemming from the proliferation of charter schools: racial segregation.

HEALTH
BEN LEDBETTER & FRANK TAYLOR: Agencies trade accusations as Rutherford seeks to switch regions (Carolina Public Press reports) -- If Rutherford County goes through with a plan to stop receiving behavioral health services through Vaya Health, the agency has claimed that residents will face unnecessary instability and reduction in some services. County commissioners and representatives of Partners Behavioral Health Management, the regional agency to which commissioners are seeking to switch, have strongly rejected that claim and accused Vaya of fearmongering over a letter that Vaya CEO Brian Ingraham sent to service providers and care recipients.

ENERGY & ENVIRONMENT
Pipeline work pauses for bird nesting season (Rocky Mount Telegram reports) -- Workers on the Atlantic Coast Pipeline are taking a break from tree cutting along the route due to bird nesting season. The 600-mile Atlantic Coast Pipeline being built by Duke Progress Energy and Dominion Energy Transmission that will run through Nash County will transport natural gas.

… AND MORE
SALEEN MARTIN: At the N.C.-Virginia border, a family makes its home in both states (Norfolk Virginian-Pilot reports) -- Peggy Lefler makes dinner in Virginia. When she's tired, she walks across the hall to North Carolina. She travels between the two states every day without ever leaving her white, two-story farmhouse on Highway 13 – a 300-year-old family home bisected by the state line. In 1919, Lefler’s mother, Edith Freeman Seiling, was born on a snowy night in what they call the Virginia bedroom. It's tucked away upstairs, right across from the North Carolina room, where 99-year-old Seiling says she took her first vacation. “I was born in Virginia, and the first place I went was North Carolina,” she joked.

VANESSA FRIEDMAN: Melania Trump’s Coat Sends a Message, but to Whom? (New York Times reports) -- “There was no hidden message,” a spokeswoman said of the first lady’s jacket reading, “I really don’t care. Do U?” She’s right, our fashion critic writes. It wasn’t hidden.