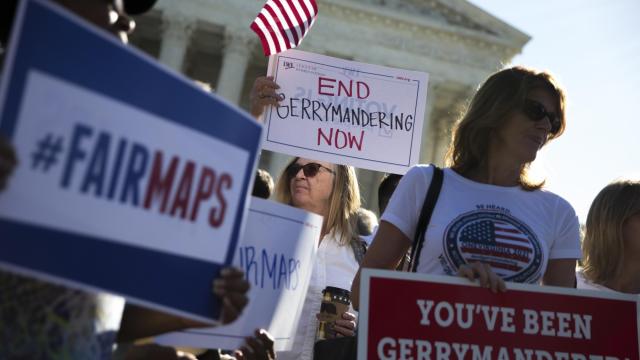 Tuesday, June 19, 2018 -- A round up of opinion, commentary and analysis on: Efforts to limit partisan gerrymandering falter at Supreme Court, legal battle over HB2 returns to federal court in Winston-Salem, Trump's border policy under continued fire, entire NC communities will be affected by sea-level rise and more.

GERRYMANDER CAN KICKED DOWN TO TOBACCO ROAD?
SCOTT BAUER & GARY ROBERTSON: High court decision extends legal battle over gerrymandering (AP reports) -- Democrats hoped a Wisconsin case would be the vehicle the U.S. Supreme Court would use to strike down highly partisan gerrymandering of electoral maps. When those hopes fizzled, attention turned to N.C. A case challenging that battleground state's congressional districts appears to offer stronger evidence of harm.

ANNE BLYTHE: Is NC partisan gerrymander case up next after Supreme Court 'punts' on Wisconsin and Maryland? (McClatchy Newspapers report) -- The U.S. Supreme Court sidestepped making a landmark ruling on Monday about when gerrymandering for partisan gain goes too far, leaving some legal analysts to speculate that North Carolina could have the next case to test that question. The justices issued long-awaited rulings in Wisconsin and Maryland cases that could have had a profound stamp on legislative redistricting in the states and reshape American politics. Instead, the justices sent both cases back to lower courts for further proceedings, a move largely described on social media as "a punt."

ADAM LIPTAK: Supreme Court Avoids an Answer on Partisan Gerrymandering (New York Times reports) -- The Supreme Court declined to address the central questions in two closely watched challenges to partisan gerrymandering, putting off for another time a ruling on the constitutionality of voting districts designed by legislatures to amplify one party’s political power.

NINA TOTENBERG: Supreme Court Leaves 'Wild West' Of Partisan Gerrymandering In Place — For Now (NPR reports) -- The U.S. Supreme Court punted on its biggest decision of its term so far. The justices had been expected to rule on the limits of partisan gerrymandering. Instead, the court sidestepped the major issues on technical grounds, sending the issue back to the lower courts for further examination.

ROBERT BARNES: Efforts to limit partisan gerrymandering falter at Supreme Court (Washington Post reports) -- The court made technical rulings in cases brought in Wis. and Md. that seemed to hold the promise of being a landmark decision. The decision leaves districts in both states intact for the midterm elections.

JOAN BISKUPIC: 9-0 ruling masks deep division on gerrymandering at Supreme Court (CNN reports) -- The Supreme Court's rejection of Democrats' challenge to districts they say were rigged on a partisan basis by Wisconsin Republicans came on a 9-0 vote, but dueling opinions revealed internal conflicts and portend difficulty ahead for any future gerrymandering claim.

RICHARD PILDES: Will the Court Ever Address Gerrymandering? (New York Times column) -- Until we shift to a more sensible system than having partisan state legislatures create election districts, judicial constraints would be welcome. Monday’s decisions reject one means of challenging partisan gerrymanders under the Constitution, but the court is soon going to be faced with other approaches.

AMBER PHILLIPS: Supreme Court just gave Republicans a big break on gerrymandering (Washington Post analysis) -- The court decided not to rule partisan gerrymandering unconstitutional, pausing efforts by Democrats to change the maps in time for the 2018 and 2020 elections.

DAVID DAILEY & CATHERINE VAUGHEN: The only people who can fix gerrymandering now are voters (Washington Post column) --Gerrymander, as well as a federal three-judge panel in North Carolina, which will likely head to the Supreme Court

LAURA LESLIE: Weekly protests conclude at legislature, but movement continues (WRAL-TV reports) -- State lawmakers took the day off after several long days last week, but that didn't stop protesters from conducting the last of a series of weekly demonstrations at the General Assembly.

More arrested in final week of demonstrations (AP reports) -- More than 130 people have been arrested or cited by police at the Legislative Building during six weeks of non-violent action as part of a national civil rights movement seeking largely liberal-leaning demands.

CAMPAIGN 2018
Candidate begin filing to run in judicial races (AP reports) -- The first day candidates can file to run for state judgeships attracted more than 120 people seeking seats on the bench this November.

POLICY & POLITICS
HIROKO TABUCHI: How the Koch Brothers Are Killing Public Transit Projects in the U.S. (New York Times analysis) -- In communities across the country, the billionaire conservatives are waging a sophisticated fight against new rail projects and bus routes.

GOP, Dem Governors Back Benefits for Pre-existing Conditions (AP reports) -- A bipartisan group of governors including N.C. Gov. Roy cooper, is speaking out against a Trump administration decision that could narrow access to health insurance benefits for those with pre-existing conditions.

MICHAEL HEWIETT: Legal battle over HB2 returns to federal court in Winston-Salem on June 25 (Winston-Salem Journal reports) -- House Bill 2, widely decried as discriminatory against gay and transgender people, may have been repealed, but the legal fight it led to is far from over. On June 25, a federal judge will hold a hearing on pending motions in U.S. District Court in Winston-Salem. State Republicans and the president of the UNC system want the lawsuits against the state to go away, but plaintiffs represented by the ACLU of North Carolina and Lambda Legal argue that the law legislators replaced HB2 with doesn’t do enough to protect LGBT people.

A cruel Trump. A cowed Congress (Charlotte Observer) -- Donald Trump's policy of separating families is abhorrent. Thom Tillis, Richard Burr and other members of Congress can step in

End Trump’s border policy now (Greensboro News & Record/ Winston-Salem Journal) -- The Trump administration’s new border policy that heartlessly separates children from their parents has been a cruel disaster and should be rescinded immediately.

Our government is destroying families (Hendersonville Times-News) -- The administration’s war against immigrant families has to end. It is cruel and beneath the ideals of this nation. At our nation’s southern border, children, some as young as babies, are being ripped from the arms of their weeping mothers. These aren’t even people who have broken the law. Some of these people are fleeing violence and persecution. They have come here asking for asylum. Yet the U.S. government’s first act is to take their children from them. Parents and children are separated and placed in different detention facilities. The media were given a tour of one such facility located in a former Wal-Mart in Texas. A U.S. senator toured another and said he saw adults and children held in large pens like cages.

RICK SMITH: Raleigh startup Hush Buddy is first to launch crowdfunding under NC law (WRAL-TV/TechWire reports) -- A new era in raising capital for startups across North Carolina is getting underway with a Raleigh startup formally launching a crowdfunding campaign as authorized by the NC Paces Act.

MATTHEW BURNS: Former DA convicted in wife-hiring scheme (WRAL-TV reports) -- A former prosecutor was found guilty of fraud and obstruction of justice for providing a no-show job for a colleague's wife.

EDUCATION
ALEX GRANADOS: Education Trust highlights gaps in black and Latino college degree attainment (EdNC reports) -- Two new briefs from The Education Trust highlight gaps in higher educational degree attainment for black and Latino adults in the United States, and list N.C. as 19th in the nation for percentage of black adults who attain college degrees, earning the state a C + from the organization.

REBECCA MARTINEZ: Entire NC Communities Will Be Affected By Sea-Level Rise (WUNC-FM reports) In 30 years, more than 15,000 N.C. homes will be chronically inundated, meaning they're flooded about every other week, according to the Union of Concerned Scientists. The nonprofit advocacy group released a report showing where and when sea-level rise is likely to impact residents' daily lives. Climate Analyst Erika Spanger-Siegfried said entire communities will be affected.