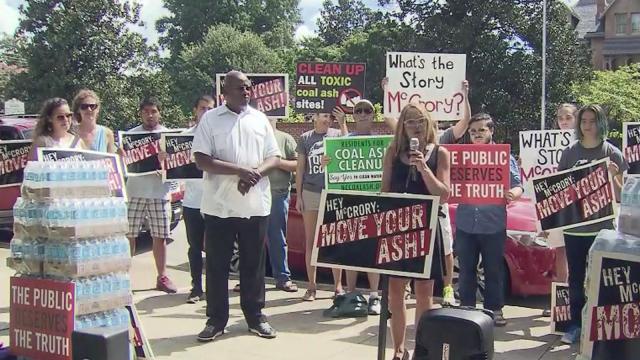 McCrory, aides protest too much in well safety dispute (Fayetteville Observer) -- Maybe Gov. Pat McCrory has forgotten the time-tested wisdom about what you do when you find yourself in a hole. For reasons that aren't clear, he's still digging. And if he hasn't done it already, he's perilously close to hurting himself and his re-election campaign.

HEY GOV. MCCRORY: Stop meddling with scientists' coal ash warnings (Charlotte Observer) – The fact that the state’s epidemiologist has resigned in protest amidst a conflict over water-safety warnings is no big deal in Gov. Pat McCrory’s eyes. “We basically have a disagreement among scientists,” McCrory said. That’s not what we’re seeing, governor. Not by a long shot. Looks more like an ugly tug-of-war between scientists trying to protect the public and an administration trying to keep negative environmental headlines at bay in an election year.

Keep politics out of water controversy (Hendersonville Times-News) – When it comes to toxic chemicals in drinking water wells near Duke Energy coal ash pits, who should we trust? A state scientist with a doctoral degree who has worked almost 30 years protecting public health? Or our governor, who worked 28 years for Duke and has a strong interest in tamping down controversy while he runs for re-election?

Contaminated facts (Greensboro News & Record) -- The heavy-handedness of the McCrory administration doesn’t help its case and could have a chilling effect on state scientists in the future. The governor’s chief of staff, Thomas Stith, even convened a late-night news conference to call Ken Rudo a liar. One thing’s for sure: This looks bad. Gov. Pat McCrory, a Republican, worked for Duke Energy for nearly three decades and critics have questioned whether the state has loosened its reins on environmental protection on his watch.

Elections board should enhance public access (Winston-Salem Journal) -- Transparency in government is good for everyone, especially voters. We hope the Forsyth County Board of Elections will take local organizers’ suggestions to heart and adopt changes to make its meetings more accessible to the public.

Millennials reconfigure the public square (EdNC column) -- Drawing on the State Board of Elections database, J. Michael Bitzer, provost and professor of politics and history at Catawba College, has calculated that Millennials constituted 59 percent of the more than 350,000 North Carolinians who registered as voters between Jan. 1 and July 30. Baby Boomers represent 34 percent of the North Carolina electorate, with Millennials at 29 percent.

Bring back the back-to-school tax-free weekends (Wilson Times) -- It has been three years since North Carolinians have enjoyed a tax-free weekend to purchase school supplies and clothes. The event, which began in 2002 and was generally held on the first weekend in August, was a hit with consumers.

Don't cut into public's access to beach (Wilmington Star-News) --- A case before the N.C. Supreme Court could make some parts of the beach off-limits.