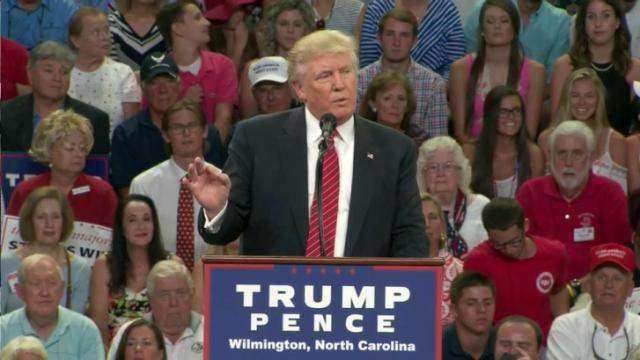 Political violence is no joke (Washington Post column) -- It was with a real sense of sadness and revulsion that we listened to Donald Trump, the Republican nominee for president, as he referred to the options available to “Second Amendment people,” a remark widely, and we believe correctly, interpreted as a thinly veiled reference or “joke” about the possibility of political assassination. Political violence is a terrible inherent risk to any free society.

Reckless remarks (Greensboro News & Record) -- Donald Trump’s typical stump speech isn’t easy to follow. He delivers a rambling series of disjointed statements, platitudes and promises that lack detail and often make no sense. When he loses his train of thought, which happens often, he just jumps to another topic, then another and another.

Is Trump's winning formula beginning to fail him? (Fayetteville Observer) -- Donald Trump may never take up residence in the White House, but he'll leave us with memories of the most colorful and unconventional presidential campaign we've ever seen.

Cooper needs to seriously consider resigning (Wilmington Star-News) -- We aren’t certain Cooper is obligated to defend laws he finds indefensible or unconstitutional. After all, he is an elected official. Voters get the final say on how he’s performed his job. But with Election Day less than three months away and the state’s legal fees mounting, we think Cooper should consider stepping down and devoting himself to convincing voters that the Republicans are wrong on these issues.
http://www.starnewsonline.com/opinion/20160811/editorial-aug-11-cooper-needs-to-seriously-consider-resigning