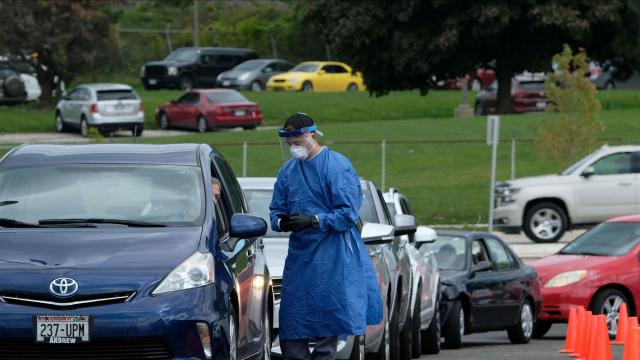 CNN — A Centers for Disease Control and Prevention forecast that combines the data from dozens of independent models predicts US deaths from Covid-19 could reach 233,000 by the end of the month.

"This week's national ensemble forecast indicates an uncertain trend in new COVID-19 deaths reported over the next four weeks and predicts that 2,800 to 6,800 new deaths will likely be reported during the week ending October 31," the CDC says on its website.

More than 212,000 Americans have already lost their lives to the virus, according to Johns Hopkins University.

New cases on the increase

Covid-19 cases are trending upward across the US, with only two states reporting a decline of cases compared to last week. And hospitalizations across the country have also begun to rise, according to data from the COVID Tracking Project.

Wisconsin health officials reported a record-high number of 141 new patients Wednesday, days after the state saw records in new Covid-19 cases and deaths. Gov. Tony Evers announced the state will open a field hospital in response to the surge in hospitalizations.

"We obviously hoped this day wouldn't come but, unfortunately, Wisconsin is in a much different and more dire place today, and our health care systems are being overwhelmed," Evers said.

Other state leaders say they're not trailing far behind.

"Our hospitalization rates are surging and beginning to place a strain on our healthcare system (especially staffing)," Utah Lt. Gov Spencer Cox wrote on Twitter. "Sadly, we are now seeing increased fatalities. The Wisconsin announcement should be a sobering reminder as Utah isn't far behind in infection rates."

Montana, Nebraska, North Dakota, Oklahoma, South Dakota and Wyoming have all seen record-high hospitalization numbers in the past days.

The uptick in Covid-19 patients comes as the US approaches winter with a daily Covid-19 base line that experts say is far too high. For the first time since August, the nation is averaging more than 44,000 new Covid-19 cases daily, according to data from Johns Hopkins University -- an average that won't help as the country enters what health officials say will be a challenging season.

At least half of US states, scattered across the Midwest and Northeast, are reporting more new cases than the previous week, according to Johns Hopkins. Alabama and Hawaii are the two states with a decline in cases.

Some US leaders have pushed new measures hoping to curb the spread of the virus. In Kentucky, Gov. Andy Beshear said the state is seeing the third major escalation of cases and his mask mandate would be renewed for another 30 days.

That announcement comes after Beshear said authorities had been instructed to step up mask enforcement.

Wisconsin issued a new order earlier this week limiting public gatherings. And in New York, the governor announced restrictions for areas where Covid-19 clusters were occurring -- including closing schools and limiting crowds at houses of worship.

Clusters of Covid-19 cases in parts of Brooklyn, Queens and outlying New York City suburbs of Rockland and Orange counties alarmed officials in the city, where schools reopened for in-person classes last week. The clusters are in areas with large Orthodox Jewish populations, and Gov. Andrew Cuomo has blamed the outbreaks in part on a lack of mask-wearing in the community.

The strict new measures were met with protests by members of the Orthodox Jewish community who set items on fire in Borough Park, Brooklyn, late Tuesday and into early Wednesday. Demonstrations continued into a second night, where many protesters were seen not wearing masks or social distancing.

A northern California county reimposed stronger restrictions this week after more than 160 students and staff linked to an evangelical college tested positive for the virus, health officials said. Shasta County was moved this week to a more restrictive tier in the state's reopening plan, indicating "substantial" spread of the virus.

The move means some nonessential indoor businesses, such as bars that do not serve food, will have to close their operations. The growing spread of the virus has also forced nearby Tehama County to move to a more restrictive tier.

Despite the grim outlook for the next several months, experts have long said there are ways to hold down the virus until a vaccine becomes available.

"We keep avoiding that elephant in the room," Ryan said during a social media Q&A on Wednesday.

Health officials have said some lockdowns can be prevented with the help of robust testing and contact tracing systems that would allow local leaders to track Covid-19 infections and isolate those individuals before they further spread the virus. But in areas where community spread is rampant and testing is inadequate, contact tracing can be next to impossible.

Ryan said sometimes, countries "face no choice," when it comes to lockdowns.

The lockdowns have consequences, he said, "but this is not a no-consequence effort, we need to find that balance ... between stopping this disease, giving us the time to develop the measures we need to save lives," Ryan said.