Only seven Democratic impeachment holdouts remain: Here's what they have in common 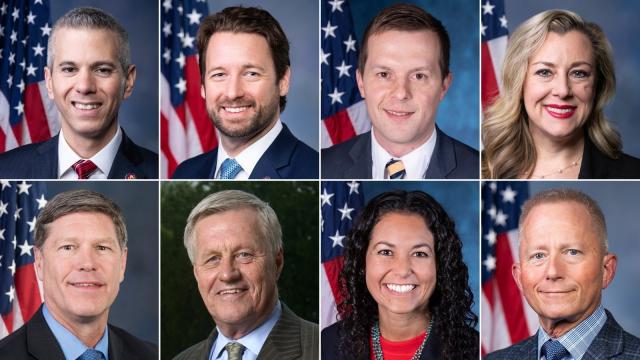 CNN — The Ukraine revelations triggered a dramatic sea change on impeachment, as scores of Democrats stampeded to publicly declare their support for an impeachment inquiry.

In the aftermath of the Speaker Nancy Pelosi's September 24 announcement that formal impeachment proceedings would begin, nearly every remaining Democrat among the 235-member House caucus got on board the impeachment train.

All, that is, but seven.

So who are these seven holdouts? And more tellingly, where do they hail from and what do their districts tell us about why they might be holding their fire?

Geographically, they are spread out across the country, each from a different state.

But a CNN analysis of US Census data and election results found several revealing traits shared among those Democrats still undecided.

All seven come from districts Donald Trump won in 2016, and four of the seven are from districts Mitt Romney also carried in 2012.Not only are they from Trump-won areas, five of them hail from the top five largest margins of Trump victory of any seat in the county now held by a Democrat. All of the holdouts are from districts in the top 15 by that measure.

Four out of seven won in last November's midterms by fewer than two points.

Five out of seven are from districts that flipped from Republican to Democratic control in the midterms.

In their own words

Below, as compiled by CNN's Chris Cillizza, are the stated reasons for resisting impeachment for each of the Democrats hailing from Trump-won districts.

* Rep. Jared Golden (Maine): According to the Bangor Daily News, Golden said this at a recent constituent meeting: "We didn't get one question about impeachment, about Mueller, about 'the squad' (four minority women members of the House of Representatives), about socialism versus Donald Trump — none of this BS that I think drives the silent majority of Americans absolutely insane." He later said in a statement: "I will have more to say in the coming days as I continue to carefully weigh the information we received this week and consider what I believe to be the best next steps for the House."

* Rep. Collin Peterson (Minnesota): In a statement, Peterson said: "If anyone thinks a partisan impeachment process would constrain President Trump, they are fooling themselves. Without significant bipartisan support, impeachment proceedings will be a lengthy and divisive action with no resolution."

* Rep. Jeff Van Drew (New Jersey): Here's what Van Drew told The Washington Post: "I wish we waited a little longer. I wish we looked at it a little more — continuing the investigation, continuing the hearings that we've had. I just didn't want to go down the impeachment route."

Rep. Anthony Brindisi (New York): "I'm not rushing to judgment on anything. I'm not responding to pressure from social media, I have a job to do, that's to uphold the constitution, and I intend to do that," Brindisi told CNYCentral.

* Rep. Kendra Horn (Oklahoma): From Horn's office: "She believes Congress and the American people deserve to know all of the facts before jumping to conclusions. The whistleblower law calls for a process to determine what happened and when. The Congresswoman believes this process should be conducted in a detailed, methodical, and responsible manner before any Congressional inquiry is initiated."

* Rep. Joe Cunningham (South Carolina): "We need to be careful not to get ahead of the evidence and be as deliberate and judicious as possible during this process, while following the facts where they lead," Cunningham told the Charleston Post and Courier.

* Rep. Ron Kind (Wisconsin): Kind said the whistleblower allegations are "very concerning" but didn't mention impeachment in his statement. Back in May, at an event in Wisconsin, Kind explained his thinking this way: "Whether it elevates to the level where you have bipartisan support to pursue impeachment proceedings, that question really needs to be directed toward my Republican colleagues, who all seem to be circling the wagons and protecting this president from any type of oversight or any type of scrutiny."

This story has been updated to include additional developments.