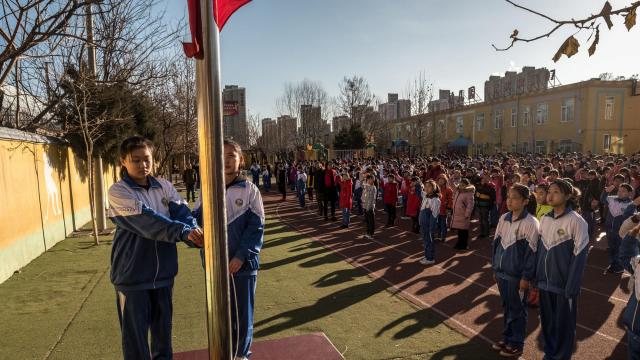 BEIJING — Ding Fei, a truck driver from rural China, was thrilled to find a school in a crowded migrant neighborhood where his 7-year-old daughter might flourish. Finally, he thought, she could learn to read and write, and maybe even have a shot at becoming a doctor or nurse, as her mother hoped.

Then the government intervened. On a bitterly cold day last month, Beijing officials informed parents and teachers that the school was unsafe and illegal. Within hours, the school, which served more than 200 students from rural areas, had been shut down and marked for demolition.

Beijing is in the midst of one of the most aggressive campaigns in recent history to drive out rural migrants, evicting thousands from their homes and leveling neighborhoods in scenes that evoke the devastation of war. The crackdown has also increasingly taken aim at dozens of schools that have sprung up to serve migrant families, advocates say, targeting children who already live on the margins of society.

These schools exist in an educational gray zone, often operating without licenses and with teachers who — like the families of their students — do not have official permission to live and work in Beijing. Educators say that more than a dozen schools have been shut down or demolished this year, often with just a few days’ notice, cutting off access to education for as many as 15,000 children. Many of these children are younger than 12.

The campaign has pitted migrant workers’ dreams of better lives against an authoritarian vision of an orderly, regimented society embraced by the ruling Communist Party.

“My Chinese dream is for my family to live a happy and healthy life, without having to worry about whether my children can attend school,” said Ding, whose family has been evicted from homes twice in the past month. “The government simply doesn’t want us here anymore.”

Cities across China have kicked off similar campaigns as growing populations of migrants from poor, rural areas have placed an increasing burden on urban infrastructure and social services. To drive them away, cities largely restrict benefits like access to affordable health care and public schools to longtime residents.

But the migrants keep coming in search of higher-paying jobs, often with families in tow. Their children end up attending privately run, low-cost schools that may be hobbled by poor teaching, insufficient funding and crumbling facilities. Teachers often lack formal credentials and rarely follow a standardized curriculum.

More than 200 million migrants live in Chinese cities, including around 38 million children, who face significant obstacles to getting a decent education, experts say.

In Beijing, a sprawling network of more than 100 privately run migrant schools serves hundreds of thousands of students for whom these are often the only option. (The government does not publicize exact figures.)

The Beijing government has shuttered dozens of migrant schools over the years. But the current campaign is the most severe in recent memory, targeting not only makeshift schools but also well-established institutions.

At Yingbo, a kindergarten in northern Beijing, more than three dozen security officers showed up outside its gates late last month and forced students and teachers to evacuate. The government said the school was operating illegally, according to staff members. Firefighters sealed off classrooms one by one.

The kindergarten has since opened in another part of Beijing, though educators say many families have returned to their hometowns or withdrawn their children from classes entirely.

“The government never explained anything to us,” said Wang Hai, Yingbo’s founder.

Advocates say such shutdowns are a crippling blow that may leave behind an entire swath of society as China’s economy shifts to high-tech industries.

“You are basically destroying a whole generation of children,” said Kam Wing Chan, a professor at the University of Washington who studies China’s rural-urban divide.

The school closings may also add to simmering discontent. More than a third of Beijing’s nearly 22 million residents are now rural migrants, many of whom express anger at being treated like second-class citizens. Advocates say migrant children will grow up in what is essentially a segregated society.

“They will likely only be able to find the same poorly paid, insecure and often hazardous jobs their parents are limited to,” said Geoffrey Crothall, communications director for China Labour Bulletin, a Hong Kong-based advocacy group. “This only reinforces their feelings of resentment and social exclusion.”

At the Shijingshan Huangzhuang School in southern Beijing, which has been ordered to close next month, parents and teachers have taken the rare step of publishing open letters denouncing the decision in a bid to remain open. The school, which opened in 2005, serves more than 1,500 students.

“Education should be fair and equal,” said Teng Chunlan, whose 6-year-old son is a student there. “Which article of law have we migrants violated?” Sheng Ying, a Chinese-language teacher at the school, said the threat of eviction had distressed staff and students. A bulldozer showed up while classes were in session, she said, only to turn around after school security guards turned them away. Many staff members were in tears, she said.

Sheng said the government should do more to ensure the well-being of migrant children, especially after President Xi Jinping promised greater attention to the plight of rural students at a major Communist Party meeting in October.

“It’s cruel,” Sheng said. “The children see demolitions all around them. We have to calm them down and tell them our school can survive.”

Li Hongbo, a second-grader at the school, worries that he will have to return to his hometown because his parents, who are unemployed, are facing eviction. “I’ll miss my friends here,” he said.

Much of the problem lies in China’s way of determining residency, known as the hukou system, which has existed since the Mao era as a way to manage population flows. The system makes it very difficult for people from the countryside to change their legal residence to the cities, even if they live and work there. Their children are also designated residents of the original rural provinces, even if they were born in the cities.

Many families have lived in Beijing for years and are reluctant to send their children back to rural areas that can lack modern schools and hospitals.

Song Yingquan, a researcher at Peking University, has found that migrant children who do return to the countryside are at higher risk of depression, abuse and dropping out than counterparts who grew up there.

“Driving out migrants like this is wrong,” Song said. “We should give them the chance to chase their dreams in the cities, no matter what their family background is.” The Communist Party, fearing mass protests, has tried to limit criticism of its efforts to drive migrants from big cities. Local officials have defended the clearances as a way to improve safety and eliminate subpar schools.

Already, there are signs of efforts to organize against the campaign. In Shaanxi, a northern province, hundreds of parents recently protested new rules making it tougher for migrant children to enroll in schools.

At Zhanbei Elementary in Fuzhou, a southern city, parents and educators have accused the government of abusing children by shutting off hot water and electricity in an effort to force the school to close.

“It’s a crime,” Xu Jiyuan, its principal, said by telephone. “What we have here are little living creatures. You cut off their water and electricity, how do you want them to feel? What will they think of the country when they grow up?”

The Dings — including Miaoke, 9, Shanshan, 7, and Tianyu, 3 — now live in a neighborhood in southern Beijing emptied out by bulldozers. They sleep in a cramped, $227-a-month room without heat and only intermittent electricity.

Shanshan, whose school was demolished, said she was bored at home and missed her friends. She has been forced to repeat preschool three times. Now she spends her days watching cartoons and playing with a pet turtle.

The family was dealt another blow this fall when they learned about the possible closing next month of Shijingshan Huangzhuang School, where Miaoke is a second-grader.

Their mother, Fang Juan, who takes care of the children while Ding works, lives in fear of another eviction notice in the form of the Chinese character “chai,” which is painted on the side of buildings that are set for destruction.

“I was so happy when I first came to Beijing,” she said. “Now I’m afraid I’ll be forced to go home.”