One Nation, Covered in Ranch 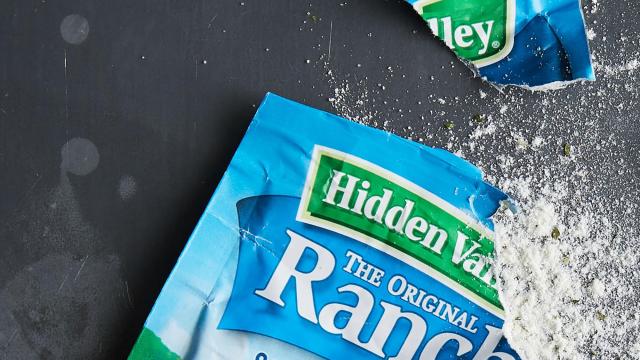 As a young republic, our nation embraced the dressings of many lands: Italian, French, Russian and the magical Thousand Islands. But with the creation — and inexorable rise — of ranch, we have forged the one true American dressing.

Invented in the 1950s, ranch is now far and away the most popular salad dressing in the country, according to a 2017 study by the Association for Dressings and Sauces, an industry group. (Forty percent of Americans named ranch as their favorite dressing; its nearest competitor, Italian, came in at 10 percent.) And it has spread far beyond salad.

It is a routine dip for chicken wings, baby carrots, French fries, tortilla chips and mozzarella sticks. It is incorporated into American classics like macaroni and cheese, fried chicken, potato salad and Thanksgiving-turkey stuffing. And it is drizzled over tacos, Tater Tots, casseroles and — perhaps most controversially — pizza.

Unlike, say, Green Goddess or Thousand Island, ranch dressing has inspired fandom beyond food: Sightings include bottles of ranch-flavored soda, ranch fountains at parties, ranch tattoos and memes, even ranch-and-pizza earring sets. It stars in countless videos posted on YouTube by ranch superfans, who pour it on uni, instant ramen, ice cream and more. “Bring me my ranch dressing hose!” commands Homer Simpson, rejecting the sensual attentions of concubines, in a famous dream sequence on “The Simpsons.”

What makes ranch ranch? It is a combination of creaminess (from buttermilk, sour cream, sometimes mayonnaise) and herbaceousness (often parsley, thyme, dill), plus a long pull of allium (onion and garlic) and a shot of black pepper. Ranch seasoning eliminates the creamy element, making it a dry spice mix like any other, ready to be added to Chex Mix, shaken onto popcorn or mixed into biscuits.

Any home cook can make a lovely, full-flavored ranch dressing using real garlic, freshly ground black pepper and bright green herbs. But the particular flavor of traditional ranch can only be achieved with the dry versions of all those aromatics: garlic and onion powder, dried herbs, powdered pepper and buttermilk.

Steve Henson, a plumber from the tiny village of Thayer, Nebraska, came up with the dressing mix around 1950, during a stint in Anchorage as a construction worker, where he also served as an occasional cook for the crew. In that part of the world, perishable ingredients like fresh herbs, garlic and onions, and dairy products were not easy to come by.

By 1954, he and his wife, Gayle, had moved to California and bought a ramshackle property called Sweetwater Ranch, in the San Marcos Pass above Santa Barbara, California. They renamed it Hidden Valley, and opened it as a guest ranch. But according to their son, Nolan Henson, the place became even more popular as a steakhouse, with Steve Henson’s dressing a favorite souvenir.

“People carried it home in mayonnaise jars,” Henson said. “Seemed like we were always mixing it, and we put it on everything: steaks, vegetables, potatoes.”

Overwhelmed by demand, in the late 1950s the Hensons began packaging the dry ingredients in an envelope that could be presented or mailed to customers, who would add their own buttermilk and mayonnaise at home — much like a boxed cake mix, which was introduced to the mass market by Pillsbury in 1948.

The product was a runaway success. “The dressing pretty much took over the ranch,” said Henson, who spent hours as a child filling seasoning packets.

With that, ranch began to take over the nation, moving from the West to the Midwest and occupying salad bars through the 1970s; a shelf-stable version arrived on supermarket shelves in 1983. But according to Abby Reisner, author of the new cookbook “Ranch” (Dovetail Press), ranch madness did not go national until 1986, with the introduction of Cool Ranch Doritos, tortilla chips that were infused with a distinctly creamy, oniony bite. Ranch was already popular on its own, but the combination of cream and crunch in one bite — a fusion of dip and chip — turned out to be a masterstroke.

Cool Ranch Doritos opened the door to ranch as a seasoning beyond salad. It began to show up frequently as a dip for French fries (replacing ketchup), for chips (instead of salsa) and for Buffalo chicken wings (pushing aside blue cheese dressing).

It is through chicken wings that ranch made the transition to pizza.

Tim McIntyre, a spokesman for Domino’s, said the company added chicken wings to its menu in 1994. Ranch was sent along with each order of wings, but Americans quickly began dunking pizza in the stuff.

“That’s what I remember from birthday parties when I was young, and on late nights in college,” said Reisner, 25. “Ranch and pizza, pizza and ranch.”

Other members of her generation agree.

“It’s kind of like a whole extra course,” said Alvin Lim, 31, a culinary student in Providence, Rhode Island. “You eat your pizza, but then you’re probably still hungry, so you stick the crusts in the ranch.” Ranch on pizza provoked controversy at first, but it is now settled law in much of the country (outside the Northeast, at least). Domino’s offers pizza already topped with ranch dressing, as do many other pizza makers. In March, a popular food truck in Portland, Oregon, called Ranch, opened a restaurant entirely dedicated to pizza with ranch. Anthony Falco, a noted pizza authority in Brooklyn, took to Instagram: “This is what happens when you legalize cannabis,” he teased.

When chef Matt Hyland and his ranch-loving wife, Emily Hyland, opened the first Emily pizza restaurant in Brooklyn, the housemade ranch they drizzled over certain pies was considered bizarre by many New Yorkers.

“The thing is, pizza is a little bit tangy and a little bit spicy,” Matt Hyland said. “Something creamy and herbal rounds it out.” The Hylands now have four restaurants in the city, so apparently their taste for ranch is shared by locals.

Ranch is most popular in the Midwest, according to the Association for Dressings and Sauces. Twisted Ranch, a restaurant in St. Louis that serves 31 different ranch dressings, opened in 2015 and has generated three-hour waits. (It moved to a larger space this year.)

“We really believed in ranch from the beginning,” said Jim Hayden, one of the restaurant’s founders. “It wasn’t just a gimmick.” Every dish on the menu contains some form of ranch: the house Bloody Mary is made with ranch-infused vodka and has a ranch-salt rim on the glass. To create new dishes, said Hayden, he and his fellow founder, Chad Allen, start by dreaming up a new ranch flavor — like Greek, with feta cheese and oregano, or curry, with yogurt and Indian spices.

“We lead with the ranch, then we build a dish around it,” he said.

Ranch may be a modern phenomenon, but its flavor profile is not new at all. Many classic condiments also combine cream (or creaminess) with alliums (the family that includes garlic, onion, leeks and chives). Middle Eastern toum, Mediterranean aioli, Caesar dressing, French onion dip and the pasta sauce “Alfredo” served at places like Olive Garden all have the same profile: a mild, cooling base set against the heat of strong, pungent alliums.

That coolness is what makes ranch an appealing partner for food that is spicy or charred or deep-fried, and many of America’s favorite foods have those flavors front and center. (In case you do not believe that ranch flavor represents the pinnacle of American culinary achievement, consider that ranch dressing is already called “American dressing” in many European supermarkets, and that the Doritos flavor we know as “Cool Ranch” goes by “Cool American.”)

The modern passion for ranch has not gone unnoticed by ambitious chefs. At the Charter Oak in the Napa Valley, an informal new offshoot of the luxurious Restaurant at Meadowood, chefs Christopher Kostow and Katianna Hong serve an appetizer described on the menu as “raw vegetables from our farm, fermented soy dip.” It is essentially crudités with ranch dressing.

“It’s very different from ranch in the way that it’s made,” Hong said; the dip contains two kinds of Asian preserved soy beans, as well as crème fraîche and chive-infused oil. “But it’s creamy and tangy, and it has salt and umami, and it definitely reminds people of ranch.”

While it comes with vegetables, she said, customers are always angling for more dip to eat with fries, with bread and with chicken.

Many other chefs are also bending ranch to their creative will. The Middle Eastern restaurant Samesa in Brooklyn serves a ranch made with labneh (a thick yogurt), alongside chicken wings crusted with the spice mix za’atar. Parcel 32 in Charleston, South Carolina, sends out “cumin buttermilk herb aioli,” a reworked ranch, with hot and spicy quail. At Compère Lapin in New Orleans, chef Nina Compton has invented a complex plate of jerk-roasted corn on the cob, topped with crunchy ranch-infused bread crumbs.

Meanwhile, back in Santa Barbara, the Hidden Valley Ranch is no more. Steve Henson sold the brand to the Clorox company in 1972 for $8 million; in 2017, Hidden Valley products (there are more than 50) took in over $450 million, according to industry analysts. But the nearby Cold Spring Tavern, the first place outside the ranch to serve the dressing, is still open — and has been since 1868, when it began life as a stagecoach stop. (It has hosted guests as diverse as Susan B. Anthony, Charles M. Schulz and Anthony Perkins.)

Steven Henson came over one day with a handful of dried herbs and spices, said Debbie Wilson-Potts, the tavern’s unofficial historian and a granddaughter of Audrey Covington, who was the owner then. Her grandmother always used the same words to described that first momentous taste: “It took off in my mouth like a freight train.”

“I think she would come back from the grave and haunt us if we changed it,” Wilson-Potts said.

For the seasoning mix:

For each cup of dressing:

1. For the seasoning mix: In a bowl, whisk all the ingredients together. Taste and adjust the seasonings to your liking. Transfer to an airtight container and store in the refrigerator until ready to use; it will keep indefinitely.

2. To make 1 cup dressing: In a medium bowl, place 1 tablespoon seasoning mix. Add sour cream and buttermilk and whisk together until smooth. Taste and add salt if needed. Serve immediately or refrigerate, covered, up to two days (or up to two weeks if made with mayonnaise).

1. In a food processor or blender, process the buttermilk, garlic, pepper, chives and mint together until the herbs are minced and the mixture turns pale green. Add the mayonnaise and process just until smooth. If desired, thin with additional buttermilk to get the consistency you want. Taste and add salt if needed.

2. Serve immediately or refrigerate, covered, up to three days.

1. Cut the mozzarella into sticks about 3 inches long and 3/4 inch thick.

2. Line a rimmed baking sheet with parchment paper. Place three shallow bowls on a work surface. Place the flour in one bowl. In another bowl, whisk eggs and buttermilk together. In a third bowl, combine the ranch seasoning with panko, parsley, dill and oregano.

3. Working one at a time, dredge a piece of mozzarella in flour. Dip in the egg mixture, let any extra drip off and then roll in panko mixture, pressing gently to coat well. Place on the baking sheet and repeat with remaining ingredients. Freeze at least two hours and up to one week. To store, transfer frozen sticks to bags or containers.

4. When ready to serve, heat 2 inches oil to 350 degrees in a large pot over medium heat. Working in batches to avoid crowding the pan, fry the frozen sticks until golden brown all over, turning occasionally, 2 to 3 minutes. Transfer to a paper towel-lined plate and immediately sprinkle lightly with salt.