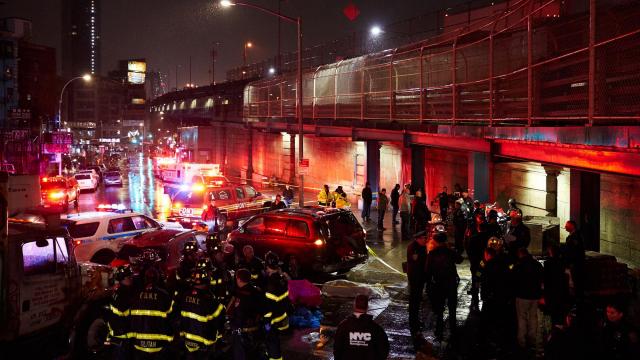 NEW YORK — A driver trying to park a minivan in Manhattan’s bustling Chinatown careened over a curb and onto a sidewalk Monday night, killing one person and injuring six others, authorities said.

At least two of the injured victims were in critical condition; two others had injuries that were serious but not life-threatening, police said.

Police and fire officials responded to the corner of Canal and Forsyth streets about 6:47 p.m., where they said that minutes earlier, a 70-year-old man had tried to park a minivan. But in so doing, they said, the man had hit the gas rather than the brakes, and the minivan mounted a curb, smashing two fruit carts and striking several victims.

Officials did not immediately release the names of those who were struck, but they said the driver, Henry Herman of Monroe, New York, stayed at the scene and that the crash appeared to have been accidental. Just before midnight, a spokesman for the New York Police Department said Herman had been arrested and charged with failure to yield to pedestrians and failure to exercise due care.

Herman and a passenger were among the injured, but declined medical attention, police said; the person who died was a man between 45 and 55 years old.

About an hour after the accident, a dark minivan remained at rest, half on the sidewalk and half on the street. Directly behind it, a body was covered by a cloth.

Jin Lin, 32, said she was walking in the area when the accident happened about 10 feet from her.

Lin said that she called 911 but that the deceased victim had “stopped breathing already.”

On Twitter, the New York Police Department asked people to “avoid the area until further notice and expect heavy delays.”