Once Reluctant to Speak Out, an Energized Obama Calls Out His Successor 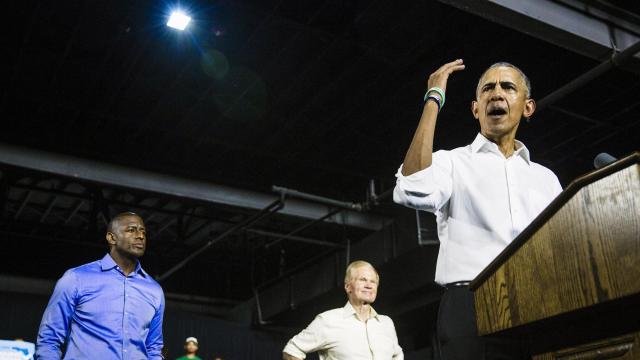 MIAMI — Former President Barack Obama’s voice has a way of lifting into a high-pitched tone of astonishment when he talks about his successor, almost as if he still cannot believe that the Executive Mansion he occupied for eight years is now the home of President Donald Trump.

For most of the past two years, he stewed about it in private, only occasionally speaking out. But as he hit the campaign trail this fall, Obama has vented his exasperation loud and often, assailing his successor in a sharper, more systematic way arguably than any former president has done in three-quarters of a century.

Although some admirers believe he remains too restrained in an era of Trumpian bombast, Obama has excoriated the incumbent for “lying” and “fear-mongering” and pulling “a political stunt” by sending troops to the border. As he opened a final weekend of campaigning before Tuesday’s midterm elections, Obama has re-emerged as the Democrats’ most prominent face, pitting president versus president over the future of the country.

In a fiery speech in Miami on Friday afternoon before heading to Georgia for another rally, Obama said that even conservatives should be disturbed by Trump’s disregard for the Constitution and basic decency. “I know there are sincere conservatives who are compassionate and must think there is nothing compassionate about ripping immigrant children from the arms of their mothers at the border,” he said.

“I’m assuming people must get upset,” he went on, “when they see folks who spend all their time vilifying others, questioning their patriotism, calling them enemies of the people and then suddenly pretending they’re concerned about civility.”

The current president fired back later in the afternoon. Trump, who has made more than 6,400 false or misleading statements since taking office, according to a count by The Washington Post, said his predecessor had lied by telling Americans they could keep their doctor under his health care plan, which ultimately turned out not to be the case.

“Twenty-eight times he said you can keep your doctor if you like your doctor,” he told a small crowd at a West Virginia airport hangar. “They were all lies. Used it to pass a terrible health care plan we are decimating strike by strike.”

Since leaving office, Obama has risen in the esteem of many Americans, as former presidents often do. A poll by CNN this year found that 66 percent had a favorable view of him, far more than those who approve of Trump’s performance in office.

When he left the White House in January 2017, Obama said he intended to follow the tradition of his predecessors by staying out of the spotlight unless he perceived what he considered broader threats to American values. Advisers said Trump’s performance in office has qualified, justifying his decision to abandon restraint this fall.

“He cares very deeply,” said Valerie Jarrett, his longtime friend and adviser. “His language has been very direct, and he’s made an appeal to citizens across our country that now’s the time to stand up for our core ideals.”

He has issued 350 endorsements that candidates then trumpeted on social media, and he has helped raise millions of dollars for Democrats. A video op-ed he made generated 17 million views and a voter registration video drove nearly 700,000 viewers to Vote.org, according to his team. He is recording dozens of telephone messages that will be sent out this weekend. Obama’s red-meat speech Friday delighted the crowd at the Ice Palace Film Studios in Miami. But if he has become the Democrats’ “forever president,” as Andrew Gillum, the party’s candidate for governor of Florida, called him, there are trade-offs for an opposition party trying to groom a new generation of leaders as the start of the 2020 presidential election approaches.

“President Obama wants to make room for the next generation of Democratic leaders to step up, which is why he’s largely stayed out of the day-to-day fray over the past two years,” said Eric Schultz, a senior adviser to the former president. “But too much is at stake in these midterms and this moment is too consequential to sit out.”

To Republicans, Obama’s decision to directly take on his successor smacks of violating norms just as he accuses Trump of doing.

“I was taken aback by the amount of space in President Obama’s speeches that are devoted to a full frontal assault on Donald J. Trump and his administration,” said Karl Rove, the political strategist for former President George W. Bush. “He spends a considerable amount of his time to get up there and trash Trump.”

Ron Kaufman, who was White House political director for the first President George Bush, said Obama’s language had been strikingly harsh from one president about another. “If you go back and dig up some of the pretty nasty things President Obama has said, I think you would be a bit surprised,” he said. “He gets away with it because of his style.”

Not since Theodore Roosevelt and Herbert Hoover has a president hit the campaign trail after leaving office to actively take on his successor in quite the way Obama has. Roosevelt actually mounted a comeback against his hand-picked replacement, William Howard Taft, while Hoover castigated Franklin D. Roosevelt’s New Deal program as “despotism” at the Republican convention in 1936. Other former presidents have been critical of their successors, too. Jimmy Carter became a vocal opponent of George W. Bush’s invasion of Iraq, calling his administration the “worst in history.” But with Carter and others, these were one-off comments in interviews or other public settings, not a systematic indictment on the campaign trail.

Until this cycle, Bill Clinton has been a regular campaigner for fellow Democrats, not least his wife, but even as he assailed Republican ideas, he generally refrained from directly attacking his successors. As in previous years, the younger Bush has been out on the trail this fall but has largely kept his post-White House campaigning to closed-door fundraisers and studiously avoided criticizing either Obama or Trump.

Obama’s criticism of Trump reflects a deep antipathy he feels for his successor, whom he called a “con man” and a “know nothing” during the 2016 campaign. Trump was the leading promoter of the lie that Obama was not born in the United States, a conspiracy theory that irritated the 44th president.

Obama has never been effective at translating his own popularity to other Democrats — the party lost all three elections while he was president when his name was not on the ballot — but he seems liberated as he finally unloads on Trump. “He wants to be in the game and he’s really energized doing it,” said Bill Burton, a former aide who caught up with Obama at a campaign stop in California. Now 57, Obama has turned even grayer on top but has otherwise not changed much. For rallies, he still doffs coat and tie for his trademark white collared shirt with rolled-up sleeves. He has dispensed with the professorial history lessons that slowed his stump speech at the beginning of the fall and sharpened his argument into an animated, finger-pointing, crowd-riling indictment of his successor.

While he did not use Trump’s name in Miami on Friday, Obama left no doubt whom he was talking about. He pointed to Trump’s use of a cellphone that advisers have told him is being monitored by foreign powers, contrasting that with the Republican criticism of Hillary Clinton’s use of an unsecure email server.

“You know they don’t care about that because if they did, they’d be worrying about the current president talking on his cellphone while the Chinese are listening in,” Obama said. “They didn’t care about it. They said it to get folks angry and ginned up.”

“Now in 2018, they’re telling you the vestigial threat to America is a bunch of poor refugees a thousand miles away,” he added, referring to a migrant caravan in Mexico. “They’re even taking our brave troops away from their families for a political stunt at the border. And the men and women of our military deserve better than that.”

In just a few days, he will find out whether voters see it his way or Trump’s.