On Trip to Bangladesh, Subway Bomb Suspect Reached Out to Refugees 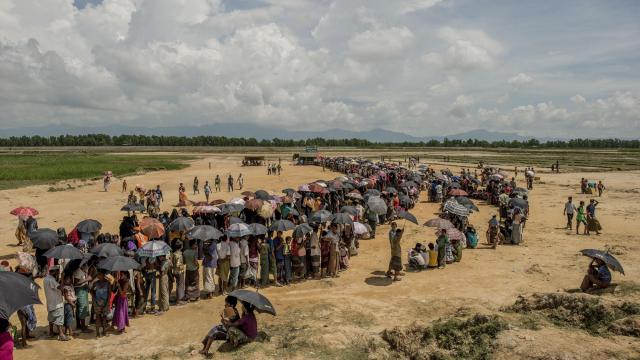 DHAKA, Bangladesh — Before Akayed Ullah returned home to New York from his native Bangladesh, and tried to blow himself up with a pipe bomb in a crowded Manhattan subway station, he had one last thing to do — an all-night bus ride by himself to help Rohingya refugees.

After visiting relatives here in the capital city, he traveled across the country, slept in a mosque and under a tree, passed out a few hundred dollars of medicine in the crowded refugee camps.

“When he left, he seemed happy,” said his mother-in-law, Mahfuza Akhter. “But when he returned, he was so upset. He said those people were living in hell, each and every minute.”

That lonely trip across Bangladesh in September remains a mystery. Was Ullah following al-Qaida, who had just urged Muslims to deliver medicine — and weapons — to the Rohingya, a Muslim ethnic group whose members have been raped, brutalized and massacred in neighboring Myanmar?

Or was he following his own heart, reflecting some sort of inner struggle as he headed toward his first known act of violence and self-destruction?

A few weeks after his trip, federal investigators said, Ullah, 27, returned to Brooklyn and began building a bomb out of matchheads and a piece of pipe he found at a construction site. He detonated it on a busy Monday morning, Dec. 11, in a Manhattan subway station, wounding himself and a few passers-by but doing far less damage than he could have. He was apprehended on the spot.

From a bed in Bellevue Hospital on Manhattan’s East Side, he has been cooperating with investigators, saying he was inspired online by the Islamic State to strike against the United States for its policies in the Muslim world. Charged with several terrorism-related offenses, he may never get out of jail. In many ways, his is an open-and-shut case.

But extensive interviews with more than a dozen friends, relatives and acquaintances, in Bangladesh and the United States, still leave a hole as to why Ullah did this. He comes across as impulsive, angry, riveted to militant social media and outraged by injustices inflicted on Muslims.

He was also described by several people who know him well as loving and giving. And he did not seem hopeless, a classic characteristic of people about to take their own lives, nor was he isolated. He was close to his childhood family — his mother and siblings — and he was building a new one.

“This is a little different,” said Mohammed Abdur Rashid, a retired army general who now runs a research institute on conflict in Dhaka, Bangladesh’s capital. “He had fewer reasons to feel desperate.”

Bangladeshi police officials have put 15 officers on this case. Ullah, especially his last actions in the Rohingya camp, represents the union of some of their greatest fears. Both U.S. and Bangladeshi investigators say Ullah was not a jihadi export from Bangladesh, but was radicalized after he arrived in New York in 2011. Before that, he did not seem interested in militant groups.

Bangladeshis are deeply worried about this phenomenon — young members of the diaspora becoming radicalized overseas.

Ullah is hardly the first. The mastermind of one of the worst terrorism attacks Bangladesh has ever suffered — the slaughter of more than a dozen foreigners at a bakery last year — grew up and went to college in Canada. Analysts say it is much easier for young Bangladeshis to be buffeted by jihadi propaganda once they are in the West.

“You guys in the West are naive,” Abdur Rashid said. “You give more space for the preachers, the hate speech. We don’t tolerate it.”

Bangladesh is more on guard now than ever. It has become home to the newest magnet for Muslim extremists: the sprawling Rohingya camps along the border with Myanmar.

Myanmar is a majority Buddhist country, and this year, Myanmar’s army wiped out thousands of Rohingya civilians after Rohingya rebels attacked police posts. Nearly 1 million Rohingya have run for their lives into Bangladesh, and the Rohingya’s plight has become a rallying cry across the Muslim world.

Agents from half a dozen different Islamist militant groups are circulating in the camps, analysts said, trying to stoke a hunger for revenge.

In September, around the time Ullah was passing out tablets of acetaminophen, stomach salts and other basic drugs in the camp, al-Qaida issued a call to arms, urging Muslims to bring the Rohingya “money, medicines, food, clothing, weapons” and to use their “souls and wealth” to “rescue their brothers.”

It is not clear if Ullah was responding to that specific call; investigators in Bangladesh said he was closely following several jihadi websites.

Relatives said his one-man aid mission to the Rohingyas was driven by his deepening religiosity and a desire to connect with Muslims in peril. Maybe at that moment he could have gone either way.

“Oh, I wish he would have kept doing that aid work,” said Akhter, his mother-in-law, who has emerged as the reluctant, teary spokeswoman for Ullah’s family in Bangladesh. For decades, Bangladesh, a poor, almost purely Sunni Muslim country of 160 million people, has been fighting a shape-shifting terrorism problem that has taken the form of highly coordinated bomb attacks — more than 400 in one day, in one hour — to slicing up young bloggers with machetes.

Since it severed itself from Pakistan in 1971 and became its own country, Bangladesh has veered between secularism and Islamism. Pakistan defined itself as an Islamic country (its official name is the Islamic Republic of Pakistan) and the People’s Republic of Bangladesh (its official name) tried to define itself in opposition to that, making secularism and tolerance its foundation.

But a sizable proportion of the Bangladeshi public never wanted to break off from Pakistan. And over the years, the Islamist hold here has tightened.

In Hazaribagh, the packed Dhaka neighborhood where Ullah grew up, many women wear full veils, leaving just a narrow rectangle of exposed skin around their eyes, and many men keep their beards bushy, their mustaches trimmed and their pants carefully hemmed above the ankle, potential signs of a stricter form of Islam.

As a boy, Ullah and his mother made the rounds in Hazaribagh, knocking on doors and asking neighbors to go with them to the mosque to pray. They were members of Tabligh Jamaat, a peaceful Muslim outreach group.

That was about as religious as Ullah got, his friends said. The son of a grocer, he attended some of Dhaka’s better private schools, like Kakoli High School and Dhaka City College.

“He didn’t smoke, he didn’t misbehave, he was always cordial, he was the type of guy who couldn’t commit any crime,” said one of his high school friends, Wazidur Rahman, who used to play cricket with him.

“My phone kept ringing that whole first night,” Rahman recalled of the day when Ullah tried to set off the bomb. “Everyone was asking the same question: ‘Wait, that’s our Akayed Ullah?'”

Ullah left Dhaka seven years ago with his parents, heading to New York on an immigrant visa to stay with other relatives who were living in the United States. He worked as a driver and part-time electrician. Bangladesh is a poor crowded country, a labor factory to the world. Bangladeshis serve as poorly paid crews on oceangoing cargo ships, clean up oil wells in Kuwait and drive taxis in New York. It seems every Bangladeshi has a friend or relative working in America or knows someone desperate to get there.

Rahman said he had recently heard about a squad of 15 Bangladeshis who went to America “the unofficial way” from Brazil to Colombia up to Mexico and across to Texas; two had drowned in a river.

“Akayed was so lucky,” Rahman said.

When Rahman saw Ullah again at Ullah’s wedding in Dhaka in January 2016, it was as if he was meeting a different person. Ullah had grown a big beard, he was austere and he broke off from the festivities and from catching up with old friends to pray by himself. The Bangladeshi government has been increasingly aggressive toward militant groups, arresting thousands of suspected sympathizers and monitoring mosques, but it has to play a careful game. It is trying to counter the militants but not come across as too anti-Islamist.

For instance, Sheikh Hasina, the prime minister, expressed outrage at the first blogger killing in 2013. But after it happened again and then again, part of a wave of assassinations against writers, publishers, gay activists and Hindus that showed the Islamists’ insidious power was only growing, she began to modify her message and said people should be careful what they write about Islam.

Bangladesh’s Islamist political parties, even if not in power at the moment, seem to be shaping the debate. Several intellectuals said they were scared to speak out about friends who had been killed. Islamists have succeeded in branding secularists as atheists, and one of the most dangerous things to be called right now in Bangladesh is an atheist.

Muhammad Jasimuddin Rahmani, a jailed mullah, has urged Bangladeshis to kill those who insult Islam.

It was one of his books that Ullah tried to push on his wife when he returned to Dhaka in early September. The purpose of the visit was to get all the paperwork in order for his wife and 6-month-old son to immigrate to New York. The three were close despite the distance; his family said he would call his wife five to 10 times a day. But during his last visit, he told his wife that Rahmani’s harsh interpretation of Islam was the one and only Islam.

“He seemed to have this hatred for America,” said Monirul Islam, the chief of Bangladesh’s counterterrorism police operations. “We’re not exactly sure where it came from. Maybe he hadn’t assimilated so well.”

“Definitely someone helped him around those camps,” Rafique said. “You need to find out who.”

Ullah’s family said they did not know; aid agencies said many people had showed up in the Rohingya camps on their own to pass out food, money or medicine for a few days before melting away.

Ullah found enormous satisfaction in doing the charity work, his family said. That raises the question of how deeply radicalized he was at that point and how many other young men in similar circumstances might be passing across that same membrane.

“It shows you how powerful that propaganda must be,” said Rahman, his old high school friend. “How could he forget his friends, his family, his baby’s face?”