On ‘Bureka Tuesdays,’ They Make Pastries The Way Their Grandmothers Did 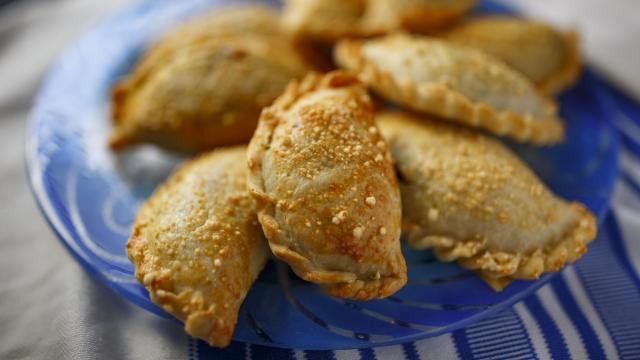 ATLANTA — Every Tuesday, the volunteers arrive at Congregation Or VeShalom, carrying aprons, pushing strollers or walking arm in arm. They find seats at tables arranged in an assembly line in the synagogue’s great hall and begin preparing the burekas, either making balls of dough for the traditional pocket pastries, rolling them out, or stuffing and sealing them with spinach and feta cheese.

Many call the gathering Bureka Tuesdays, and like the burekas themselves, it is a tradition; people have come together to bake at the synagogue for several decades, and in homes well before that. By the end of November, the group of mostly women will have baked more than 10,400 burekas this year, which they make according to recipes handed down from the grandmothers and great-grandmothers of synagogue members.

The burekas — with five different fillings, like spinach and feta cheese, or eggplant and tomato — as well as Sephardic Jewish sweets, like double-stranded cookies called biscochos, will be sold at the synagogue’s 43rd annual Hanukkah bazaar, which is expected to draw more than 1,000 people Sunday.

Around 1912, a group of Sephardic Jews left Turkey and Rhodes, and many settled in the American South. Some made their way to Atlanta, and within a few years established Or VeShalom. They served the burekas for tea and for Saturday desayunos (meaning breakfastin both Spanish and Ladino, a hybrid of Spanish and Hebrew influenced by Turkish, Greek and Italian).

“Burekas were a piece of home that these immigrants brought with them,” said Adam Kofinas, the synagogue’s executive director. “Even today with all our technology, this is a link to our heritage. Machines could make the pastries quicker, but nothing matches handmade.”

The word “bureka” is the Hebrew and Ladino term for “borek” or “burek,” as the pastries are known in Turkey and the Balkans. The pastries come in many different forms today, made with buttered layers of phyllo dough, laminated doughs like puff pastry, or with an oil-based dough, as it’s done in this community.

On a recent Tuesday, Renee Galanti Feldman, 84, took a heaping teaspoon of filling and put it in the middle of a flat piece of dough. She moved her thumb and index finger to seal the bureka and then crimp the edges.

“The old ladies would tell us how to make the burekas uniform,” she said. “Now we are the old ladies, and we have a reputation and our heritage to protect and perpetuate.”

There have been a few changes to the recipe over the years: potatoes were switched to potato flakes, frozen spinach was substituted for fresh. But their dough is still made with White Lily flour and Mazola corn oil, and boiled twice. Between the bazaar and special bureka orders, the synagogue made more than $50,000 in net proceeds in 2017. (Money is also raised from sales of “The Sephardic Cooks,” a spiral-bound cookbook first printed in 1971 that includes all the recipes made at the bazaar. The book sells for $15.)

“Coming every Tuesday is a commitment, but you get so much,” said Shelley Soriano Cooper, 61, as she rolled out her grandmother’s dough for biscochos. “We talk to the elders, we keep the traditions alive and we speak Ladino.”

After baking, lunch was served to the 50 or so volunteers for $1 per person ($3 for those who just wanted to come to eat). Everyone received a flavorful but not-so-perfectly formed bureka, as well as salmon and quajado de spinaca, a Ladino dish that is a kugel-like casserole with spinach and cheese. The meal ended with a drawing for six reject burekas, not quite polished enough for the bazaar but fine to take home as a prize.

“It’s not about the people, it’s about the cohesiveness of the community coming together. It’s not about your or my burekas,” said Elise Meyer, president of the sisterhood at the synagogue. “This year we made so many burekas we had to use the synagogue’s freezer and a caterer’s commercial freezer to store them all.”

Total time: About 2 hours, plus chilling

2 1/2 cups all-purpose flour, plus more for rolling the dough

1/2 cup strained diced tomatoes (from a can)

Or for the spinach-feta filling:

1. If using the eggplant-tomato filling, heat the oven to 425 degrees. Pierce the eggplant several times with a knife and roast on a parchment- or foil-lined baking sheet until the eggplant collapses and is completely soft, 35 to 40 minutes. When cool enough to handle, remove and discard the skin; transfer the flesh to a strainer to drain and set aside.

2. Make the dough: In the bowl of a stand mixer fitted with the paddle attachment, add the flour and salt and pulse briefly to combine. Add the butter and pulse just until the butter pieces are the size of peas. Slowly add the ice water and process just until combined. Form the dough into 2 disks about 1 inch thick, wrap in plastic and refrigerate for at least 30 minutes.

3. Meanwhile, heat the oven to 350 degrees and line a baking sheet with parchment paper.

4. If using the spinach-feta filling: In a medium bowl, combine the spinach, feta and Parmesan. Season to taste with salt and pepper, then add egg and flour.

5. If using the eggplant-tomato filling: In a medium-sized frying pan over medium heat, heat the olive oil. Add the onions, season with salt, and cook until beginning to soften but not brown, about 3 to 5 minutes. Stir in the tomatoes and eggplant, breaking them up with a wooden spoon, and cook until the mixture begins to thicken and loses some of its moisture, about 5 minutes. Season to taste with salt and pepper and remove from the heat. When the mixture has cooled, stir in the Parmesan, egg and flour.

6. Working with one disk of dough at a time, on a lightly floured surface and using a lightly floured rolling pin, roll out the dough into a circle about 1/8 inch thick or slightly thinner. Using a 3 1/2-inch circle cutter, cut as many circles as you can from the dough.

7. Hold a circle in your hand and fill with 1 tablespoon of filling. Fold up the sides into a half-moon shape and pinch the edges closed to seal, crimping them if you like. Place the sealed bureka on the prepared baking sheet and repeat with the remaining dough.

8. Brush the tops lightly with the egg wash and sprinkle with a large pinch of grated Parmesan. Bake for 30 to 35 minutes or until the crusts are golden brown.