On ‘Black Lightning,’ a Superhero Takes On Race, Justice and the Real World 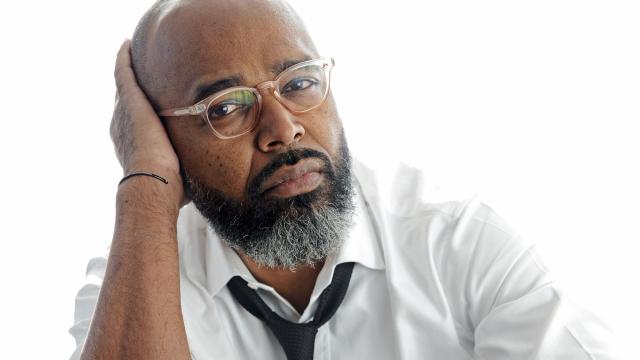 It is a disturbingly familiar scene: a black motorist standing outside his car on a rainy night, arguing with the white police officer who has pulled him over for seemingly no reason.

As this moment plays out in the opening minutes of “Black Lightning,” the CW series based on that DC superhero, the motorist in question is Jefferson Pierce (Cress Williams), who stepped back from his role as a crime-fighting vigilante to focus on his civilian identity as a high-school principal and father to two teenage daughters.

Just when his roadside confrontation is about to cross a dangerous threshold, Pierce closes his eyes. When he reopens them, his pupils glow with angry electricity, the lights on the police car flicker out momentarily, and the cop lets Pierce go. Just a case of mistaken identity.

But in Pierce’s mind, he has decided that he must become Black Lightning again.

“Black Lightning,” which debuts on Jan. 16, shares its roots in the comic-book adventures that have yielded other CW shows like “Arrow,” “The Flash” and “Supergirl.” But where those other programs often coat their real-world commentary in layers of allegory, “Black Lightning” takes on issues of race and social justice directly and unambiguously.

The confrontation between Pierce and the police officer is not just a metaphor for the experience of black people in contemporary America; it is drawn from the real life of Salim Akil, the showrunner and an executive producer of “Black Lightning.”

Describing an incident in which he was halted just outside his office in Santa Monica, California, Akil said in a recent interview, “I had been stopped by the police quite a few times, but my anger in being stopped again was about to get me killed. I stopped putting on the mask of this is how I’m supposed to act in these situations.”

“At a certain point,” he added, “I closed my eyes and took a moment. And I asked myself, is this really worth dying for?”

In that situation, Akil could not call on any superhuman abilities. But he sees “Black Lightning” and the platform it provides as a power in its own right.

“I’ve been given a gift,” Akil said of the show, “and I have to use it the way I think I’m intended to use it, to talk about the things I feel people need to talk about.”

Akil, who is credited with developing “Black Lightning,” has worked widely as a director of films (“Jumping the Broom”) and a writer, director and producer of television shows like “Girlfriends,” “The Game” and “Being Mary Jane,” series that were created by his wife, Mara Brock Akil. (They are also collaborating on shows for other networks, including the OWN comedy-drama “Love Is ___.”)

Mara Akil, who is also an executive producer of “Black Lightning,” said she likes to think of her TV characters as possessing “black girl magic,” which she explained as “power without the suits or capes.” In childhood, she said she had an affection for more traditional superheroes like Wonder Woman and the Bionic Woman.

Salim Akil’s youthful fascination with costumed crime-fighters was more complicated. Though he loved comic books so much that he wore a Batman costume to school one Halloween, he drifted away from the medium.

“I never saw a true representation — an iconic hero — for myself,” Akil said. “It just got boring, reading about all these really powerful and heroic white guys.”

His interest was rejuvenated in the 1990s by the comics of Milestone Media, a publishing imprint for black writers and artists to tell stories of black superheroes. (Several of these characters have since been incorporated into the DC universe.)

In 2015, when the Akils struck an overall TV deal with Warner Bros., the parent company of DC, they inquired about the Milestone characters. Those properties were unavailable, but Warner Bros. instead offered them Black Lightning.

As Salim Akil recalled that conversation, “Mara’s the very expressive one and I tried to be cool, like Miles Davis cool. I just sat there, like, ‘That sounds interesting.’ But inside, I was like, ‘oh, yeah.'”

Akil added, “To me, Jefferson Pierce represented every side of me. I knew that I would be able to flesh him out.” The Black Lightning character debuted in his own DC Comics series, written by Tony Isabella and illustrated by Trevor Von Eeden, in 1977. In biographical details added in the ensuing decades, Jefferson Pierce was revealed as a child of the Metropolis slums and a former Olympic athlete who uses his control of electricity to fight criminals, corrupt politicians and other evildoers.

Of particular interest to the Akils was the idea that Black Lightning had set aside his superhero status and returned to it in middle age.

“It echoes the idea that we can all get into this fight, at whatever place in our lives, at whatever age,” Mara Akil said. “There’s a lot to fix, a lot to make right, and it’s not going to solve itself.”

That aspect of the character was also welcomed by Williams, the “Black Lightning” star, who had nearly written off the possibility that he’d get to play a superhero.

A veteran of TV shows like “Nash Bridges,” “Prison Break,” “Friday Night Lights” and “Hart of Dixie,” Williams had auditioned for the lead on “Luke Cage,” the Netflix series based on that Marvel character.

When it instead went to Mike Colter, Williams said: “That was rough. I can be honest at this point. Everybody who knew me knew that I desperately wanted to do that. But when you don’t get a role, you lick your wounds and move on.”

Seeing a dearth of black superheroes in film and TV, Williams said, “I felt like I was quickly aging out of them.” But after landing “Black Lightning,” he said he connected to the concept of a hero who feels unsure if his powers are helping him win his battles or exacerbating the conflicts.

“It’s easy to draw the parallel of Jefferson Pierce being Martin Luther King and Black Lightning being Malcolm X,” he said.

Greg Berlanti, an executive producer of CW’s many comic-book adaptations, including “Arrow,” “The Flash” and “Riverdale,” as well as “Black Lightning,” said it was more important that Salim Akil feel a sense of investment in his show than have it conform to other DC superhero shows.

“I think it’s compatible,” Berlanti said of “Black Lightning,” “but I also think it’s an evolution. These shows, whether we’re a part of them or not, are only going to stay interesting, exciting and relevant for the audience if there are fresh voices behind them. New people with new stories to tell have to lead the charge. What’s so exciting is that Salim is one of those people.” Mara Akil emphasized that, for all of its moral ambitions, “Black Lightning” was still, at its heart, an adventure series. In its first major story arc, where Pierce takes on a violent gang that has overtaken his city, there are also flashy costumes, fight scenes and special effects that are staples of superhero narratives.

“When entertainment is executed well, with a vision and from a personal place, it can break through,” she said. “But it can still be fun — the genre is supposed to be fun. It’s supposed to let us think about good versus evil and where do we line up?”

If “Black Lightning” has worked the way he is hoping, Salim Akil said he’ll know at the end of October.

“If I’m walking down the street or taking my kids trick-or-treating,” he said, “and I see some young girls or boys who are dressed up like Black Lightning, that, to me would be success.”