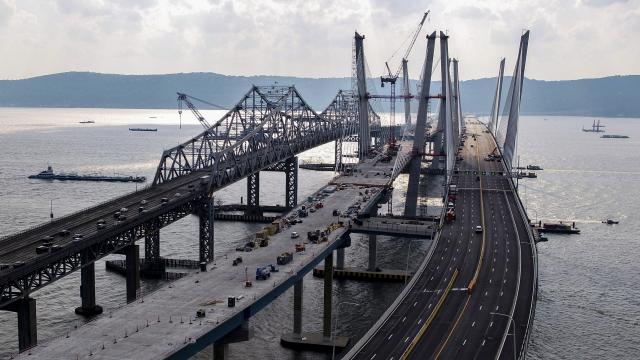 NEW YORK — In its next life, the old Tappan Zee Bridge is going to the fishes. Really.

Chunks of concrete and steel that held the 3-mile span aloft over the Hudson River for decades will now be scattered among a half-dozen artificial reefs off Long Island. The first bargeload of the Tappan Zee’s remains will be carried to its watery grave this week, with about 29 bargeloads to follow through the summer and early fall.

By recycling the Tappan Zee, New York state has not only found an affordable and practical way to dispose of some of its massive parts, but is also significantly expanding a state-managed artificial reef program that aims to provide new habitats to increase the diversity of marine life, promote recreational fishing and diving and bolster economic development.

The state program maintains 12 artificial reefs — two in Long Island Sound, two in the Great South Bay, and eight in the Atlantic Ocean — though only six of them will receive a piece of the Tappan Zee; state officials plan to build up the remaining reefs next year with materials from somewhere else. The old bridge parts will be sunk, along with 30 decommissioned barges, tugboats and tenders from the Erie Canal and upstate waterways as well as steel pipes and scrap materials from state transportation projects.

Gov. Andrew M. Cuomo said a few parting words for the bridge at a news conference recently. “It’s coming down, as you know, and it’s a large structure so it begs the philosophical question: What does a bridge do in life after it is finished its life as a bridge? What is the afterlife? Is there a bridge heaven?”

“Well, there is a bridge heaven,” Cuomo continued. “Bridge heaven is you spend all your life above the water serving people and then you go to bridge heaven"— which he added — “is you go below the water.”

The Tappan Zee, which opened in 1955, was once a vital crossing just north of New York City, carrying nearly 140,000 vehicles a day at its peak. But eventually the bridge began showing its age, though efforts to replace it dragged on for decades. Finally, Cuomo stepped in with a nearly $4 billion project to build a pair of sleek modern spans, the first of which opened to traffic last August. The replacement bridge is named after the governor’s late father, Mario M. Cuomo, who was governor for three terms.

Today, sections of the Tappan Zee stand forlornly as it is picked apart. Though some parts are destined for recycling centers and scrap yards, others are being repurposed. The New York State Thruway Authority, which operated the Tappan Zee, sold 133 concrete-and-rebar panels from the deck of the bridge — at $1 apiece — to counties and the state Department of Transportation to use for infrastructure projects.

Now concrete and steel from the Tappan Zee’s supporting structure will be deposited among the six artificial reefs, which sit on sites ranging from three acres to 744 acres. An aide to the governor said that the bridge’s steel trusses may also be used to build up the reefs.

All the materials will be thoroughly cleaned before being submerged in the water, state officials said.

The cost of transporting the materials to the artificial reefs is about $5 million, according to state officials. That cost is being covered by Tappan Zee Constructors, the team of private contractors building the Tappan Zee replacement bridge, and the New York State Power Authority, which oversees the New York State Canal Corp., the owner of the vessels that are to be scuttled.

Joe Paradiso, a charter boat captain on Long Island who is president of the New York Sportfishing Federation, said that his group has called for years for rebuilding and expanding the reefs. The underwater structures attract sea bass, fluke, porgies, blackfish and even juvenile lobsters and turtles.

“It’s an ongoing issue,” he said. “Some of these reefs are just depleted and in need of more materials.”

Paradiso, who used to drive over the Tappan Zee a couple times a year, said that using its parts to build up the reefs will not only benefit those who fish and dive, but also the local businesses that they support, from bait and tackle stores and fuel stations to hotels and restaurants. “Instead of going to a recycling plant or somewhere else, it’s a much better use,” he said.

Bill Ulfelder, executive director of the Nature Conservancy in New York, said the expansion of the artificial reefs went hand in hand with his group’s efforts to improve the water quality around Long Island, which has long been polluted by runoff from home septic systems and sewage treatment plants, and bring back oysters, clams, mussels and scallops. “The more we can do to clean the water and improve the wildlife,” he said, “it brings back all the things people love about Long Island.”

Ulfelder, a scuba diver, recalled that when he first moved to New York City nearly a decade ago, he saw a holding yard for old subway cars that he was told were bound for artificial reefs.

“These iconic symbols of New York — subway cars and now the Tappan Zee — can keep on living,” he said. “Now they’re home for fishes, crustaceans and shellfish — other New Yorkers."