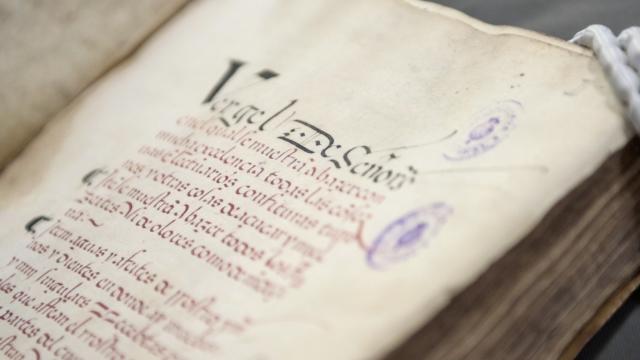 MADRID — When Spanish conquerors brought home a tomato from the Americas in the 16th century, its red color caused a sensation at the royal court.

But because of its resemblance to a poisonous fruit found around the Mediterranean, the tomato was long used only as a table decoration. Not until 1755 did it appear in a savory sauce recipe in a Spanish pastry cookbook written by Juan de la Mata, the pastry chef for King Philip V and King Ferdinand VI.

That recipe is among a dozen that have been adapted by contemporary chefs and incorporated into a video project by Spain’s National Library, to raise the profile of its vast collection of 23,000 food-related works, which date as far back as the 1400s.

The videos discuss the recipes and weave in commentary by historians and chefs to explain the context in which such gastronomy developed, and how modern cooks can draw inspiration from old ways of preparing food. The library has also been creating digital versions of its most important works, including about 200 gastronomy books.

“We have an enormous wealth of data, but that doesn’t mean we can easily attract a huge public,” said Elena Sánchez Nogales, who oversees the library’s digital section. “The library has always been a natural habitat for researchers, but food is clearly interesting more and more people, so we just needed to find the right language to reach them.”

Almudena Villegas, a Spanish food historian who participated in the project, said the effort was well-timed: “We’re only now beginning to appreciate how much food tells us about our social history, as well as how much food is a linkage between different sciences that we have long cared about, from chemistry to biomedicine and agronomy.”

In 2010, the library hosted an exhibition about the history of gastronomy, curated by Ferran Adrià, the chef of the world-famous El Bulli restaurant, which closed in 2011. The critically acclaimed show persuaded the library to hire Tramontana, a Madrid design consultancy, to develop the videos, which have been posted online with English subtitles.

Tramontana is led by Gabriela Lendo, who used to run a business that prepared private dinners around Madrid. She and her team selected recipes from the library’s books and paired them with Spanish chefs known for making dishes based on the country’s traditional cooking methods.

Javier Estévez, a Madrid chef, reworked a 19th-century recipe for caramel pig trotters by Carmen de Burgos, the author of a famous cookbook titled “Modern Cuisine” and one of Spain’s first women journalists. Using different pen names, she wrote newspaper columns and books for women in which she also tried to advance their rights, touching on sensitive topics like divorce. After the Spanish Civil War, her works were banned by the regime of Francisco Franco.

Estévez noted that his specialty, offal, was also closely linked to social divides. “People from lower classes found their own ways to be creative, because they suffered hunger and needed to eat every available part,” he said.

He said he enjoyed working with older recipes that offered general guidance rather than the step-by-step instructions of modern cookbooks.

“We’ve become much more technical, so that we treat the preparation of food as if it was some sort of scientific dissection in which everything should also be measured,” Estévez said. “But I don’t think cooking should be like mathematics. I personally much prefer trial and error.”

For his video, Fernando Saénz, an ice-cream maker, used a 1906 recipe from the library for vanilla poundcake, which he has now added to the selection in his own shop in Logroño, in the Rioja region of Spain. “I wanted to make sure my clients could actually taste the wonderful recipe that I retrieved,” he said.

The cake is made with eggs and caramelized sugar, and topped with lemon and orange zest. “The buzzword today is creativity, but in the context of great kitchen technology,” he said. In the past, “cooking was all about ingenuity, the art of doing a lot with little.”

Like other chefs involved in the library project, Saénz is in love with the past. He even plans to build an ice well next to his shop, a smaller replica of 17th-century wells built in central Madrid, in which the city stored snow collected during the winter from the surrounding mountains.

“I’ve traveled 120 years back in time to discover how much more enjoyment you can get from some basic ingredients than from a lot of what we now call traditional ice cream,” Saénz said. He followed the original poundcake recipe and used the same ingredients, but decided to caramelize the sugar to evoke the smell of baked bread coming out of the oven.

Paco Morales needed little convincing to work on an eggplant recipe that included fresh cheese and ginger. He runs Noor, a Michelin-starred restaurant that focuses on Al-Andalus recipes dating to the 10th century, when the Moors controlled southern Spain and his own city of Córdoba. His selected recipe was relatively modern, from a 16th-century cookbook of Ruperto de Nola, who was the chef of Ferdinand I, the king of Naples.

“I really feel that our Western food culture has become obsessed with always finding the latest innovation, instead of really valuing the wealth of our past,” Morales said. “It’s important to understand that so much of what we consider new and fashionable already existed a long, long time ago.”