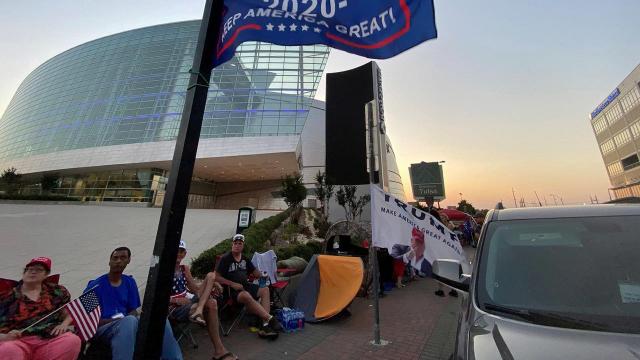 CNN — Coronavirus cases are rising in Oklahoma as President Donald Trump forges ahead to host a rally in Tulsa on Saturday that is expected to be attended by thousands.

Oklahoma is seeing a steady increase in its average of new confirmed cases per day. According to a CNN analysis of Johns Hopkins University data, Oklahoma averaged about 203 new cases per day over the week ending June 17, which is up approximately 110% from the previous seven-day period.

"Unfortunately, we continue to set new records in the number of cases reported in Tulsa County," Bruce Dart, the director of the Tulsa Health Department, said Wednesday at a news conference.

Hospitalizations in the state have remained relatively stable throughout much of June, but they have ticked up slightly in the past two days, according to COVID Tracking Project data.

The Tulsa rally is the President's first since coronavirus shut down the country and halted all in-person campaigning. Local and campaign officials tell CNN that more than a million people have RSVP'd to the rally. A local official involved in planning said they expected 100,000 to show up at the Bank of Oklahoma Center on Saturday. The venue can hold just under 20,000.

Attendees will not be required to maintain social distance or wear masks, despite the Trump administration's top public health officials stressing the importance of both measures in preventing the spread of coronavirus.

Two days before the rally is set to take place, a spokesperson for the BOK Center said it had asked the Trump campaign to provide a written plan for safety measures for the event.

"Given the Tulsa Health Department's recent reports of increases in coronavirus cases and the State of Oklahoma's encouragement for event organizers to follow CDC guidelines, we have requested that the Trump campaign, as the event organizer, provide BOK Center with a written plan detailing the steps the event will institute for health and safety, including those related to social distancing. Once received, we will share the plan with local health officials," Meghan Blood said in a statement.

"We take safety seriously, which is why we're doing temperature checks for everyone attending and providing masks and hand sanitizer. This will be a Trump rally, which means a big, boisterous, excited crowd," Murtaugh said.

She said all building staff will be tested for coronavirus, have their temperatures taken and be provided with personal protection equipment. Blood said the venue would be cleaned and "disinfected repeatedly throughout the event, with special emphasis on high touch areas." She said plexiglass will be placed at all concession locations, and that 400 hand sanitizing stations have been placed throughout the venue.

Dart noted Wednesday he recommended that the Trump rally be postponed "until it's safer, until the data tells us that it's not as large a concern," to have people in enclosed spaces.

Campaign manager Brad Parscale tweeted on Monday that the campaign plans to check the temperature of everyone who enters the venue. They will also be providing hand sanitizer, and each attendee will receive a mask provided by the campaign, although they will not be required to wear it. Trump has notably declined to wear a mask in public.

Tulsa Mayor G.T. Bynum, a Republican, wrote in a Facebook post on Tuesday that he had concerns about the rally.

"Do I share anxiety about having a full house at the BOK Center? Of course. As someone who is cautious by nature, I don't like to be the first to try anything. I would have loved some other city to have proven the safety of such an event already," Bynum wrote.

After months stuck inside the White House, Trump has been anxious to get back on the road and start campaigning again. A Trump administration aide said there is tension at the White House and within the campaign over the President's slipping poll numbers, and Trump believes that part of this has been due to his inability to talk directly to his supporters through rallies packed with thousands.

On Saturday, the campaign is planning a spectacle with a carnival-like atmosphere, two campaign officials tell CNN, including an outdoor stage for musical acts and high-profile surrogates to energize a large overflow crowd.

A senior campaign aide said the Trump team is viewing Saturday's rally as a "hard re-set". They want the optics of the event to reflect the restart of the campaign and the view that the country is in the process of turning the page on the coronavirus and opening back up the economy.

The campaign announced a long list of surrogates that will appear with the President on Saturday, including 15 members of Congress. The campaign is offering the members of Congress a ride on a charter from Washington to the event, according to three campaign sources. Sources also tell CNN the campaign cast a wide net in recruiting members to be a part of the rally and several turned down the offer.

The rally was initially scheduled to be on Juneteenth, the day commemorating the end of slavery in the United States, but the timing and location drew heavy criticism from African American leaders and Democrats. In addition to the significance of June 19, Tulsa also has a history of racial violence. In 1921, hundreds of African Americans were killed by a white mob that burned down what was then known as "Black Wall Street." Trump bowed to pressure and moved the rally back by one day.

This story has been updated with a statement from the BOK Center on Thursday.