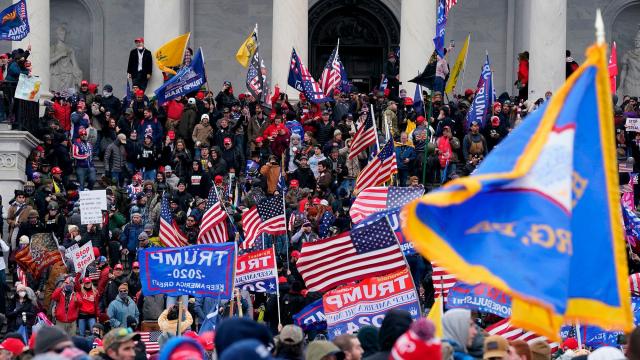 CNN — The Justice Department unsealed an indictment Friday tying together nine alleged associates of the right-wing Oath Keepers in the largest insurrection conspiracy charged to date related to the January 6 attack on the US Capitol.

Prosecutors say the nine defendants from four states allegedly coordinated plans to travel to Washington to breach the Capitol and disrupt the certification of the presidential election. Three defendants were first charged last month, while six new defendants were arrested this week.

The indictment unsealed Friday is the most significant step yet by federal prosecutors as they've mapped out organized activity within the massive mob that stormed the Capitol. Prosecutors have zeroed in on several right-wing extremist groups, including the Oath Keepers.

Searches of the defendants' cell phones and email accounts revealed coordinated logistics, like a shared van ride up to Washington, DC, from North Carolina and a pre-dawn rendezvous in the lobby of a Virginia hotel on the morning of the insurrection, investigators wrote in court filings.

Some of the alleged co-conspirators were spotted in video footage moving in a military style formation through a crowd on the east side of the Capitol, and later congregated in the rotunda.

And some of the defendants appeared to take their cues directly from former President Donald Trump, citing his public appeal for supporters to come to DC for a "wild" rally on January 6.

Prosecutors said this trio of military veterans recruited like-minded extremists to travel to Washington and hoped to ferry weapons by boat across the Potomac River. In the new charges unsealed Friday, prosecutors said Watkins coordinated efforts among fellow Oath Keepers.

Two of the new defendants, siblings Graydon Young and Laura Steele, made their first court appearances earlier this week after they were charged with conspiracy and other crimes related to the attack. According to court documents, Young and Steele applied for membership to the Florida chapter of the Oath Keepers in the days and weeks leading up to the insurrection.

In an email sent to the Florida group on December 3, Young wrote that he was "looking to get involved in helping," according to a criminal complaint. Steele, his sister, submitted her application in January, outlining her experience in law enforcement in her membership form.

Kelly Meggs and his wife, Connie Meggs, are also charged in the conspiracy. The Justice Department said that they were arrested on Wednesday in Ocala, Florida.

A married couple from Ohio with ties to the Oath Keepers are facing conspiracy charges, according to court documents unsealed Friday.

Federal prosecutors said Bennie Parker, 70, and Sandra Parker, 60, "planned their attack in advance and communicated with one another before, during, and after their attack on the Capitol," in coordination with members of the Oath Keepers.

The Parkers were both charged with four federal crimes: conspiracy, destruction of government property, obstruction of an official proceeding, and unlawful entry on restricted grounds.

The retirees from Morrow, Ohio, allegedly coordinated their trip to Washington with Jessica Watkins, an Oath Keeper who was indicted in one of the most serious cases stemming from the insurrection. Prosecutors said Watkins and Bennie Parker discussed weapons, uniforms and lodging before the trip.

Around the time that lawmakers were certifying the Electoral College results, the Parkers were allegedly "operating as a group with several other similarly-attired members of the Oath Keepers Militia," and moved in tactical formations, according to court documents. Sandra Parker breached the Capitol and Bennie Parker stayed outside but remained in communication with the group, prosecutors alleged.

Three days after the attack, Bennie Parker texted with Watkins about the nationwide FBI manhunt for Capitol rioters, according to texts obtained by investigators and mentioned in court documents.

"I wouldn't worry about them coming after us," Watkins allegedly told Bennie Parker.