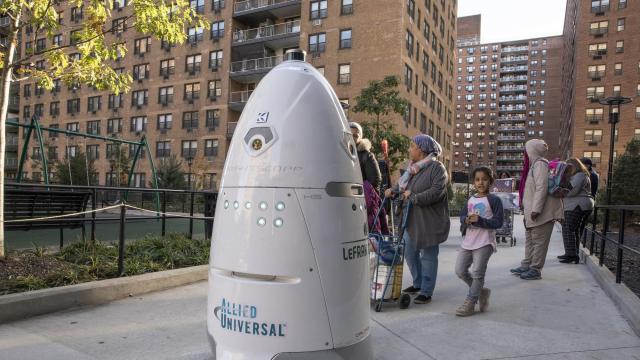 NEW YORK — Home security has come a long way from the days when hard-wired alarm systems were the only option for single-family homes or, in the case of apartment complexes, a security guard or two to patrol the grounds.

Today, wireless or cellular all-in-one systems allow you to check on your house from afar, and voice command capabilities let you tell a virtual assistant to shut the garage door while you cook dinner. As for apartment buildings, roving robots and sophisticated camera systems have improved security and also given residents more control by shifting video intercom access to cellphones.

In co-op and condominium buildings, property management firms have been increasingly installing camera systems with 360-degree vision that can provide data analytics, according to Dino Iuliano, chief revenue officer at Planned Cos., a concierge, security, maintenance and janitorial services firm.

These systems send video footage to electronic encoders at security monitoring centers — either in apartment buildings or off-site locations run by a security firm. The encoders analyze and break down the video into data, and send alerts and responses when something is deemed “out of the norm,” Iuliano said. For example, a motion detector that has been triggered can turn on the lights at night; or, a package that has been left unattended in an area where it shouldn’t be will signal the security firm to alert building staff.

“We’re at the point where security in some high-end buildings is starting to resemble systems in casinos and airports,” he said.

LeFrak City, a sprawling housing complex in Queens, has Rosie, a security robot that ambles through the grounds and acts as an “extra set of eyes” for the security team, according to Randi Koch Nir, the director of lease enforcement at Mid City Security, the firm in charge of the complex’s security.

The robot, built by Knightscope, based in Mountain View, California, was rented about a year ago as part of a $70 million upgrade to the complex. Rosie has cameras facing in four separate directions, providing a 360-degree view, and patrols the area 24/7. The footage is monitored by LeFrak security personnel. Resembling the sleek, cylindrical top of a spacecraft, Rosie was named by Nir after her mother Roz, and because the machine reminded her of the robot maid from the cartoon “The Jetsons.” She is programmed to patrol the complex in silence, but in an emergency, she can broadcast messages through a loudspeaker. She also comes in handy while monitoring the outdoor common areas at night when no one is around, Nir said. “If anything suspicious happened, Rosie would be recording it.”

According to a Knightscope spokeswoman, Rosie’s basic cost structure starts at $7 an hour, or about $61,000 a year.

For apartment buildings that need an intercom upgrade, firms like Doorport and ButterflyMX have been marketing smart access systems that are operated by cellphones. These systems require new hardware at the building’s front door, but no new hardware or wiring inside individual apartments. Instead, tenants can use their phones as video intercoms to let guests and deliveries into the building.

Ben Taylor, chief executive of Doorport, said he is also testing a new product that would allow landlords to upgrade their existing intercom systems without changing the current infrastructure by the front door.

After an app is downloaded to a cellphone, Doorport’s proprietary software would allow tenants to create and send access codes to guests for temporary access to the building. A small hardware component installed by the firm into the existing intercom would enable recognized cellphones to automatically open the front door, even if the phone is in a back pocket or a bag. The tenant could also use the firm’s app as their video intercom system to buzz in guests or send them temporary access codes.

“I believe easy access is gaining popularity as an amenity,” Taylor said.

The firm is testing the prototype in a 30-unit building in the Upper East Side owned by Ponte Equities. Angelo J. Ponte, a project manager, said he was interested in the product as a cost-effective way to retrofit the firm’s older properties with new technology because there’s very little infrastructure cost associated with the upgrade.

“To have the ability to automatically open the door when your hands are full with groceries — you can’t put a price on that,” Ponte said. “It’s brilliant.”

The technology is not that different for single-family homes, where homeowners can opt to have a system professionally installed or go the DIY route.

Sensors that detect things like water leaks, or whether a window or door has been opened, can be purchased from hardware stores for as little as $10 to $40. Basic camera systems from companies like Nest Labs start at about $200 and get more expensive as more hardware and capabilities are added to the kit. SimpliSafe offers a DIY kit that includes monitoring services.

Firms like Nortek Security & Control, which sells products under the 2GIG and ELAN brands, among others, also offer add-on products like stove and gun monitors, which are connected to the same monitoring system as the video cameras and intrusion sensors. If the stove is left on too long, or a gun is moved from a locked location, a notification is sent to your cellphone or a security panel.

Homeowners who want a more sophisticated system — say, with cameras with artificial intelligence or facial-recognition capabilities — may need a professionally installed system with monthly monitoring fees, which can cost significantly more than a DIY kit. Nicholas Yallo installed a relatively simple security system when he moved from an apartment into a single-family home on Staten Island about 10 years ago. As smart home technology has improved, he has upgraded to a fully integrated system that allows him to use his cellphone to monitor video footage of his house, and also to control the lights, thermostat and garage door.

“I travel a lot, so being able to see and control my home while I’m away is very important,” he said. “It makes me feel like I have a presence there while I’m gone.”

Yallo said he spent several thousand dollars on the upgrade over the past several years and spends about $40 a month for monitoring services. He chose professional installation, which helped hide the hardware, including wires and even his doorbell camera.

“I wanted my house to be as smart as it could be,” he said.