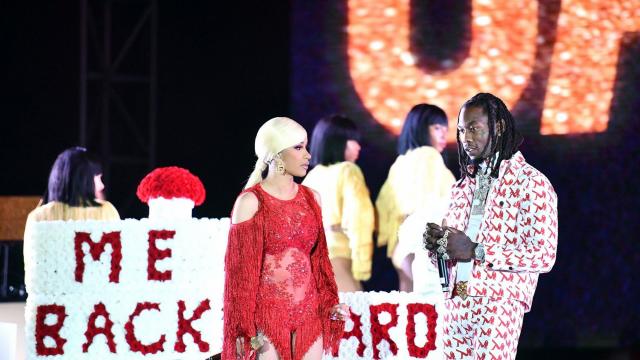 The Atlanta rapper crashed Cardi B's performance at the Rolling Loud Festival in Los Angeles Saturday night to very publicly ask his estranged wife to take him back.

He came onstage with a bouquet of flowers in hand and a cake reading, "TAKE ME BACK CARDI."

"I just want to tell you I'm sorry, bruh," Offset told her. "In person. In front of the world."

Judging from her reaction onstage, Cardi was not amused.

Manuel Frayre was at the festival and posted a video of the incident. He said Offset's entrance took the crowd by surprise.

"You could see that she had no idea and she was very bothered but [sic] the public display," Frayre told CNN in a Twitter message. "But as soon as they cleared the stage she came back stronger and delivered a fantastic performance. She handled everything very gracefully."

Cardi and Offset were married last year and have a daughter, Kulture, born in July.

Earlier this month, the Bronx rapper announced on Instagram that she and Offset had split. The news came amid rumors that he had been cheating on her.

Since then, Offset has been vocal in trying to get Cardi B back. He made a ... er, colorful all-caps proclamation on Twitter last week about how he missed his wife.

Some of her fans are not having it either.

"Don't take him back!" one person yelled in a video posted on social media. "Once a cheater, always a cheater!"

Others are criticizing Offset for interrupting Cardi while she was working and turning the spotlight on him.

And others are calling the whole thing a stunt.

"Violating my baby father is not gonna make me feel any better, because at the end of the day that's still family. Unfortunately we're going through things, and it's not private, it became public. I just want things to die down. I just need time so we can see eye to eye. I can't predict the future, I don't know, but the whole coming at my baby father bull**** -- that doesn't make me feel any better," she said in the first video.

In a second video, Cardi B addressed fans who said she was defending him.

Cardi also referenced Pete Davidson, the "Saturday Night Live" comedian who made a troubling Instagram post on Saturday in which he said, "I really don't want to be on this earth anymore."

"I wouldn't want my baby father to have that feeling because millions of people be bashing him every day. That's a nasty feeling. I wouldn't want that," she said.

Cardi B is the first woman to headline the Rolling Loud Festival, which started in 2015.